SAN DIEGO (AP) — San Diego Padres All-Stars Manny Machado and Fernando Tatis Jr. stood next to each other and said it’s all good between them after their weekend shouting match in the dugout during a season that’s been spiraling out of control.

Machado shouted and cursed at Tatis during the face-to-face confrontation in St. Louis on Saturday night. The 29-year-old Machado and 22-year-old Tatis were separated by teammates before taking their defensive positions.

The dustup came after Tatis struck out looking and then argued the call by umpire Phil Cuzzi. Padres manager Jayce Tingler was ejected when he came out to argue on Tatis’ behalf.

Machado could be heard saying “It’s not about you. It’s not … about you,” as teammate Adam Frazier and a Padres coach ushered Tatis away from the angry third baseman.

The Padres blew a 2-0 lead Saturday night and were swept in the three-game series, going 2-8 on a trip that has seriously damaged their hopes of a repeat trip to the postseason.

Before Tuesday night’s home game against NL West leader San Francisco, Machado called Tatis “my little brother” and added that “we’re always going to be together no matter what. We’ve got a lot of years here together moving forward. That’s done and said. He’s got to go. We’ve got to go as a team as well. That’s what we’re going to try to reach in the next 13 days.”

The Padres had a one-game lead for the second wild-card spot on Sept. 9. They were then swept in three games at the Los Angeles Dodgers, split a four-game series at San Francisco and lost three straight in St. Louis.

San Diego went into Tuesday night’s action four games behind St. Louis for the second wild card, with the Cincinnati Reds one game ahead of them.

Asked his take on what happened Saturday night, Tatis said: “It happened, it’s part of baseball, it’s a part this game brings out, especially when good players are trying to win and stuff is not going our way. At the end of the day I’m glad it happened. I feel like that brings us stronger, when you go inside and talk about it and you analyze it and you just come together.”

Machado, who has a $300 million, 10-year contract, did most of the talking during the impromptu, three-minute availability with the media after batting practice. Toward the end, when Machado kept repeating that the Padres simply needed to win baseball games, Tatis, who has a $340 million, 14-year contract, covered his face with his glove and appeared to be laughing.

Talking about the incident, Machado said it was “unfortunate it happened inside the dugout in a crucial situation for us as a team. We’ve also got to apologize to the fans for being able to see that. We handled it internally as a team.”

The Padres have struggled since the trade deadline, when they failed to add starting pitching. Their rotation has been hard-hit by injuries, but their offense has also gone missing at times during seemingly uninspired stretches, leaving them looking the opposite of the fun-loving team that was playing with swagger early in the season.

“We’re the leaders of this organization, of this team, so with the pressure of trying to win, the emotions that go through everything, we’ve got Fernando over here who’s about to win the MVP, we’ve got a team that’s trying to compete and get to the World Series, we haven’t been playing so great baseball so emotions get involved and it gets the better of us at all times,” Machado said. “Those are situations we learn as leaders, as a team, as an organization, and we just get better from that.”

Machado said they were putting the dugout scrap to rest for good.

The Padres ended a 13-year playoff drought during the pandemic-shortened 2020 season and beat the Cardinals in the wild-card round before being swept in the division series by the eventual World Series champion Dodgers.

While Tatis has led the conversation for NL MVP, he’s had an up-and-down season, even being moved from shortstop — where he started the All-Star Game — to the outfield due to a recurring left shoulder injury. He has been back at shortstop recently after fellow All-Star Jake Cronenworth broke a finger, but was back in center field Sunday and committed a brutal error that led to a five-run first inning in St. Louis’ 8-7 win.

A capsule look at World Series between Braves and Astros 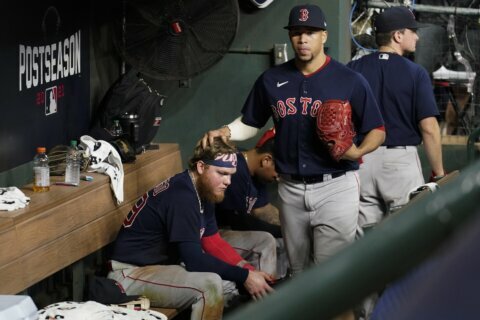