ST. LOUIS (AP) — Nolan Arenado hit a two-run homer in the eighth and had three RBIs and Paul DeJong had a solo shot to help the St. Louis Cardinals beat the Cincinnati Reds 6-4 on Saturday night.

St. Louis has won three of four and gained a game on Cincinnati in the NL wild-card race. The Reds, who have lost four of six, started the day percentage points behind San Diego for the second spot.

“I’m here to drive runs in and I’m here to help the team win,” Arenado said. “I had an opportunity there against a good pitcher and I was fortunate enough to hit a pitch up and hit it out of the ballpark. I said it yesterday and I feel like I haven’t done a great job of that but it felt good today to do it.”

Alex Reyes, who had been closing games for most of the season, pitched the eighth to earn the victory. Reyes (7-8) struck out one and walked one. Giovanny Gallegos picked up his seventh save.

Arenado hit his 30th homer, connecting on a 1-0 pitch from Lucas Sims (5-3) to drive home Paul Goldschmidt. Sims allowed three hits and struck out two in one inning.

The Cardinals scored twice with two outs in the sixth to tie it at 4. Tyler O’Neill, called safe after a review, scored on Arenado’s triple. Dylan Carson then dropped a short fly just out of the reach of center fielder Tyler Naquin and shortstop José Barrero for a double to chase home Arenado.

“We haven’t done a great job of coming back in games this year and for us to fight that against a good pitcher and a really good team that was huge,” Arenado said.

The two Reds players collided going after the hit and laid on the field for a few minutes before getting to their feet. Naquin came out of the game with bruised ribs, while Barrero stayed in.

India and Nick Castellanos both homered off starter St. Louis starter Miles Mikolas to account for the Reds’ four runs. India’s 20th home run came with two outs in the third. He hit a 3-1 pitch to dead center to drive in Tucker Barnhart who reached on a single. Max Schrock followed India with a base hit and Castellanos hit his 28th homer.

“Every single game we play from here on out, we need to win,” Castellanos said.

St. Louis starter Miles Mikolas lasted five innings, giving up four runs on six hits. He walked one and struck out one.

DeJong led off the third with his 17th homer to left field. Harrison Bader followed with a double and later scored on a Tommy Edman single.

Castillo got some help in the fifth after he dropped a throw on the back end of a double play that would have ended the inning but instead allowed DeJong to score. After a review, the umpire crew said Bader slid too wide of second base and interfered with shortstop José Barrero’s throw to Castillo who was covering first, resulting in both Bader and batter Matt Carpenter being called out. It was one of three challenges on the night.

Chess grandmaster Garry Kasparov threw out one of the ceremonial first pitches before the game. The former top-ranked player in the world, who retired in 2005, is in St. Louis participating in the Champions Showdown.

RHP Justin Miller returned to St. Louis after two rehab appearances in the minors as he recovered from right ulnar nerve irritation… Cardinals SS Edmundo Sosa, who missed his third consecutive game Saturday with a left wrist sprain, was cleared to take batting practice but still was only available as a pinch runner. Sosa hurt his wrist Wednesday making a defensive play against the Los Angles Dodgers.

REDS: RHP Sonny Gray (7-6, 3.88) faces St. Louis for the second time in two weeks and for the third time this season. He got the win in his last outing against the Cardinals, going five innings and giving up two hits — both home runs. For the year, he’s 1-2 with a 11.25 ERA against St. Louis.

CARDINALS: J.A. Happ (8-8, 6.24) has dropped his last two decisions, including lasting just one inning against Cincinnati on Sept. 1 when he gave up seven runs on eight hits, including two homers. This will be his third time facing the Reds this season, second as a Cardinal. 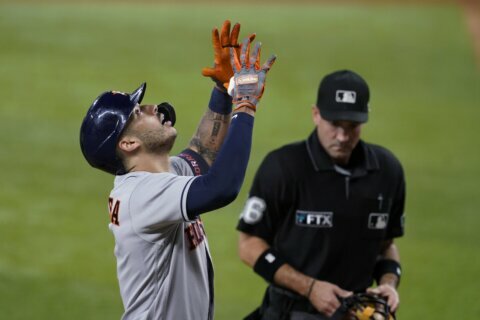