NEW YORK (AP) — The reeling Yankees made a Subway Series of mental and physical mistakes in their weekend opener at the Mets.

Catcher Gary Sánchez had a pair of glaring defensive lapses, and throwing errors by third baseman Gio Urshela and shortstop Gleyber Torres led to three runs in the Yankees’ 10-3 loss on Friday night.

The Yankees lost their season-high seventh in a row and for the 11th time in 13 games following a 13-game winning streak. They remained a half-game ahead of Toronto for the AL’s second wild-card berth.

“I think we’re beyond frustrated,” second baseman DJ LeMahieu said, “but now’s not the time to point fingers at anyone, and just everyone to raise their game and collectively get out of it together.”

Rookie Tylor Megill struck out a career-high 10 in a career-long seven innings, and Jeff McNeil had a drag bunt for an RBI single in a five-run third inning.

“Just a poor performance, period,” Yankees manager Aaron Boone said. “It’s a bit of a broken record. We got to keep grinding at it. We got to keep working at it and we will, and trust that it will turn, but it’s obviously going to take everyone and, obviously, that starts with me and making sure we’re ready to roll.”

This is the Yankees’ worst 13-game stretch since losing 13 of their final 15 in 2000 — before rebounding to win their fourth World Series title in five seasons.

They wasted a 1-0 lead in the first when Sánchez bailed on a play at the plate and allowed Jonathan Villar to score on a throw by left fielder Joey Gallo that beat the runner by more than 20 feet. Sánchez’s defensive lapse was the type that hardly occurs since Major League Baseball and the players’ association adoped a rule in 2014 limiting home plate collisions.

Plate umpire Ted Barrett called out Villar on Gallo’s throw, but a video review showed that by standing up and reaching out, Sánchez allowed the sliding Villar to get his foot on the plate before his helmet was tagged.

“Obviously he’s going to be out easy,” Boone said. “He got out of his crouch and athletic position. In that spot, where you’ve got a guy dead to rights, you got to just lower your body, maybe initiate the contact but remain athletic in your legs.”

Gallo’s homer in the second put the Yankees ahead 2-1, and the Mets burst ahead in a five-run third.

Montgomery forced in the tying run with his third straight walk, and Sánchez stayed glued to the plate, extended an arm and watched Ushela’s off-line throw from his knees sail to the backstop on Javier Báez’s grounder, allowing another run to score.

McNeil dragged a bunt to the first-base side on the next pitch for the Mets’ first run-scoring bunt hit since Todd Frazier against Detroit on May 26, 2019.

Kevin Pillar’s sacrifice fly and James McCann’s double for his first RBI single Aug. 12 boosted the lead to 6-2. Torres’ 17th error, second-most among AL shortstops, allowed two runs on what should have been an inning-ending double play grounder by McCann in the seventh.

The Mets, who closed within four games of a playoff spot, got their first win in four games this year while wearing black jerseys.

“I commanded the zone from bottom to top with all three of my pitches,” Megill said. “I was making them feel uncomfortable.”

Mets RF Michael Conforto made a diving, shoestring catch to rob Aaron Judge in the eighth.

Judge nearly was hit by a drink that appeared to be thrown from the right-field seats in the seventh inning while Judge caught Pete Alonso’s fly ball.

With the Yankees in an NL ballpark and no DH, Giancarlo Stanton was not in the starting lineup. He likely will play the outfield Saturday and Sunday. … McNeil started in left over Dominic Smith, who has not been in the starting lineup since he was activated from the injured list on Monday.

Mets: RHP Noah Syndergaard threw a bullpen session as he recovers from COVID-19. His last minor league rehabiliation outing was Aug. 26 as he tries to come back from Tommy John surgery on March 25, 2020. He threw rehab outings May 19 and 25, then was sidelined by elbow inflamation. “We feel like he might be able to pitch for us at some point,” Rojas said. … Ace RHP Jacob deGrom, who hasn’t pitched since July 2 due to forear tightness, played catch at 90 feet, down from 120 feet.

RHP Corey Kluber (4-3) starts for the Yankees on Saturday and RHP Taijuan Walker for the Mets (7-9). RHP Clarke Schmidt could be called up Sunday for his Yankees’ season debut. 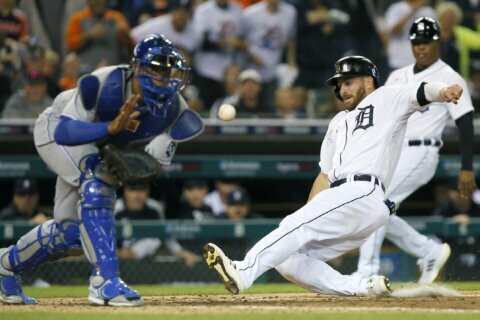 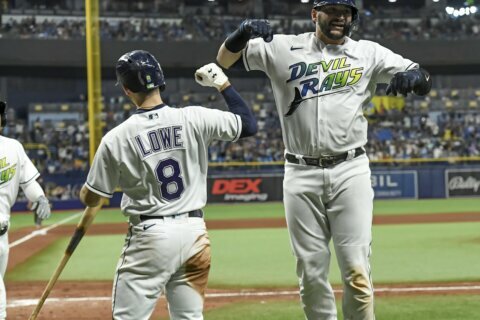