He gave up three runs and eight hits, needing 86 pitches to get through three innings, and he threw three wild pitches in the first inning alone. Kukuchi’s fastball averaged 94.1 mph, down from a season average of 95.3 mph coming in.

“I always talk about starting pitching setting the tone,” Seattle manager Scott Servais said. “Obviously, Kikuchi coming out of the chute tonight with really no command of any of his pitches was a challenge. It’s remarkable that we were still in the game at that point.”

“I felt like I wasn’t able to get in a good rhythm,” Kikuchi said through an interpreter. “No walks tonight, but getting behind in the count cost me.”

Seattle lost for the fifth time in seven games and dropped four games behind Toronto for the AL’s second wild-card berth with 14 games remaining. The New York Yankees and Oakland also are ahead of the Mariners.

Salvador Perez had a run-scoring single in a four-run eighth, his major league-leading 113th RBI.

Bubic (5-6) allowed one run and two hits in 6 1/3 innings, combining with Domingo Tapia, Josh Staumont and Gabe Speier on a three-hitter.

“It was fastball command early and then he added everything,” Kansas City manager Mike Matheny said of Bubic. “He was living on the corners with just about everything. He had a little bit of trouble early, but then he found it and got better as he went. The breaking ball showed up later in the outing. He didn’t give a lot of free passes, but when he did he figured out ways to get himself out of it.”

Kansas City stopped a three-game losing streak and at 67-81 avoided for one more day assuring its fifth straight losing season.

Whit Merrifield reached on an infield single in the first and came around on three wild pitches. Two-out singles by Andrew Benintendi, Carlos Santana and Adalberto Mondesi doubled the lead.

Mondesi and Michael A. Taylor hit consecutive doubles in the third, and Taylor homered in the fifth off Sean Doolittle.

“It was a three-run game (but) it felt like it should have been more than that,” Matheny said. “We let some opportunities slip away. That one could have gotten away from us. To add that run was big.”

Abraham’s RBI groundout off Domingo Tapia cut the deficit to 4-1 in the seventh following Ty France’s leadoff double against Bubic. 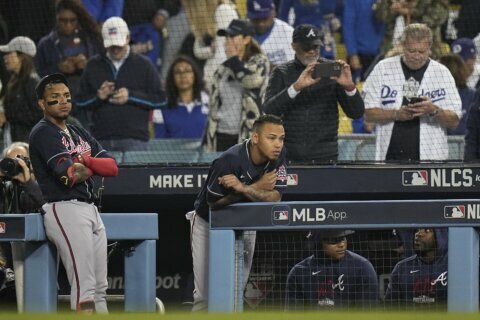