ATLANTA (AP) — The streaking Yankees withstood a ninth-inning scare that may have opened future save opportunities to a committee approach.

Wandy Peralta retired Freddie Freeman with the bases loaded for the final out, and New York held off the Atlanta Braves 5-4 in a thriller Tuesday night to extend its longest winning streak in 36 years to 11 games.

New York closer Aroldis Chapman, trying to preserve a 5-3 lead, gave up two hits and two walks in the ninth. Chapman’s bases-loaded walk to Jorge Soler cut the margin to one, and manager Aaron Boone pulled Chapman for Peralta — just in time to face the reigning NL MVP.

“As tough a situation as you can probably be brought into — Freddie Freeman staring you down with the bases loaded — and he just did a tremendous job,” Boone said.

Peralta fell behind 3-1 in the count before throwing five straight changeups. Freeman fouled off four in a row, then hit a game-ending flyout to deep left field.

“He had a hell of an at-bat,” Braves manager Brian Snitker said of Freeman before adding the rally was “just a hit away.”

Peralta earned his third save for the Yankees and the fifth of his career. The other two came earlier this season with San Francisco.

Boone wouldn’t say if Chapman would continue as the closer or share the role.

“We’ve got to figure it out, and the bottom line is a lot of people are doing really good things down there,” Boone said.

Peralta has allowed one run in nine games since returning from the COVID-19 injured list.

“I’m extremely happy with the opportunity to enter the game when the game is on the line,” Peralta said through a translator. “For me it’s a matter of preparing myself for any situation in the game.”

The Yankees remained four games behind first-place Tampa Bay in the AL East.

Chapman gave up a one-out single to Adam Duvall before striking out Guillermo Heredia. Chapman walked Ehire Adrianza before Ozzie Albies beat out a grounder to third base for an infield hit, loading the bases. The left-hander walked Jorge Soler on a full-count pitch to force in a run.

LeMahieu broke a 2-all tie by pulling Charlie Morton’s curveball into the Yankees’ bullpen behind the left-field wall. The homer drove in Andrew Velazquez, who singled.

Stanton also hit a hanging curve from Morton for a homer in the second. Stanton homered on back-to-back days as New York swept the two-game interleague series.

Dansby Swanson’s two-run double in the first were the only runs allowed in four innings by Yankees starter Andrew Heaney.

Morton (12-5) allowed four runs and six hits in five innings. He had nine strikeouts. Morton allowed only one homer in his first four August starts before facing the Yankees.

Clay Holmes (2-0), the third of six Yankees relievers, earned the win with a scoreless inning.

Atlanta’s Joc Pederson was ejected by plate umpire Chris Conroy after striking out on an inside pitch to end the fourth with runners on first and second. Pederson fell to the ground and then argued he was hit on his hand by Heaney’s pitch.

The Braves fell to 6-14 in interleague games, including a 1-9 record in Atlanta.

Boone said surgery “could be in play” for reliever Zack Britton (strained left elbow). Boone said Britton is “still kind of gathering opinions” and will see Dr. Neal ElAttrache next week when the team plays at the Los Angeles Angels. … 3B Gio Urshela (left hamstring) could meet the team in Oakland this week after potentially completing his rehab assignment with Double-A Somerset. … SS Gleyber Torres (sprained left thumb) is working out at Somerset to prepare for a possible rehab assignment next week. … RHP Corey Kluber (right shoulder strain) had his rehab assignment transferred to Somerset and is “getting ready to get back in the mix,” according to Boone. The right-hander threw 60 pitches against Double-A Akron, allowing two runs and five hits in 3 2/3 innings with four strikeouts and one walk. Urshela went 1 for 4 for Somerset in the same game.

Braves catcher Travis d’Arnaud returned after missing three games while on the paternity list awaiting Monday’s birth of his son, Leo Emmanuel. William Contreras, who filled in for d’Arnaud, was optioned to Triple-A Gwinnett.

With New York leading 4-2, Austin Riley’s single up the middle off Joely Rodriguez in the fifth drove in Albies, but a close play at the plate denied the Braves’ attempt to tie the game. Freeman was thrown out on Velazquez’s relay from shortstop, a call that stood following a review that lasted 1 minute, 40 seconds. The Braves believed Freeman’s left foot touched the plate before the tag from catcher Gary Sánchez.

After the game, the Yankees optioned OF Jonathan Davis to Triple-A Scranton/Wilkes-Barre.

Yankees: RHP Jameson Taillon (8-4, 3.94 ERA) is scheduled to start when New York opens a series against RHP James Kaprielian (7-4, 3.25) at Oakland on Thursday night following an off day on Wednesday.

Braves: Atlanta resumes its five-game homestand against San Francisco on Friday when LHP Max Fried (11-7, 3.49 ERA) is scheduled to start. The Braves are off Wednesday and Thursday. 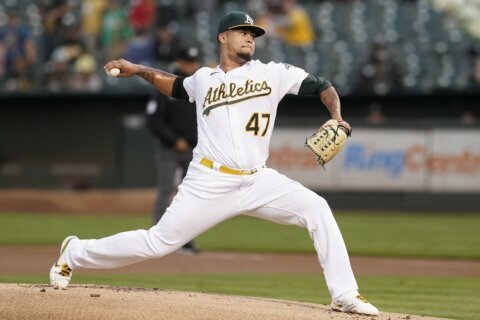 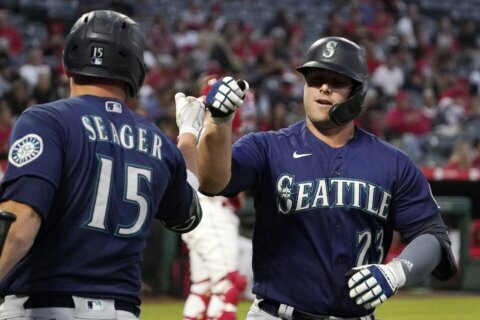 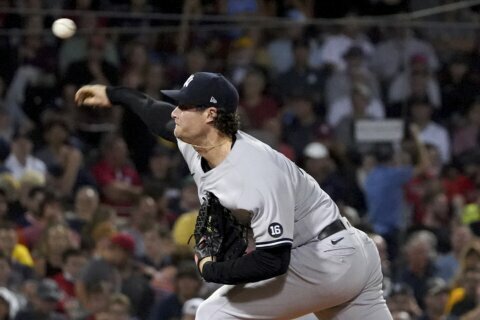