NEW YORK (AP) — Michael Conforto delivered a two-out hit that sent Javier Báez bolting home to cap a five-run rally in the ninth inning, then homered to lift the New York Mets over the Miami Marlins 3-1 Tuesday night for their second victory of the day.

In the afternoon opener — which was the completion of a nine-inning game suspended one out into the top of the first on April 11 — Conforto’s single scored the tying run and Báez, too.

Báez earned cheers from a fanbase he insulted days earlier by sprinting home when left fielder Jorge Alfaro misplayed the ball to cap a five-run inning and give the Mets a 6-5 win.

The win in the second game, which was seven innings, gave the Mets three straight victories. New York, which entered the month with a four-game lead in the NL East, began Tuesday seven games back of the division-leading Atlanta Braves.

“I was really proud of the way that we came back in that first game and to be able to carry that energy into the second game,” said Brandon Nimmo, who sparked the ninth-inning rally in the opener by hitting a two-run homer. “It was a great day.”

The Mets will have to wait to try and extend their winning streak. The game against the Marlins scheduled for Wednesday night at Citi Field was postponed a day in advance because of expected heavy rain. It will be made up as part of a straight doubleheader on Sept. 28 starting at 4:10 p.m.

“The doubleheader sweep is huge, that’s momentum that we can definitely carry over (into) the off-day,” Conforto said.

Conforto hit a two-run homer off rookie Edward Cabrera (0-1) in the fourth.

Báez followed with a single and scored on a double by Jeff McNeil — evoking memories of his game-winning sprint hours earlier by racing around third as the announced crowd of 18,101 roared.

Jesus Aguilar had a pinch-hit RBI double in the fifth off Trevor Williams, but Aaron Loup (4-0) escaped a bases-loaded jam by inducing Isan Diaz to hit into a double play.

Seth Lugo tossed a scoreless sixth and Edwin Diaz earned his 27th save with a perfect seventh.

Cabrera, making his second big league start, gave up three runs on seven hits and walked none with two strikeouts in four innings.

The opener began about an hour after Báez and Francisco Lindor held separate press conferences to apologize for the thumbs-down gesture they and teammate Kevin Pillar delivered during Sunday’s 9-4 win over the Washington Nationals.

Báez said Sunday the gesture was the players’ way of answering fans who had booed the Mets throughout August. Lindor heard some boos prior to his first plate appearance and went 0 for 3 with a walk and a sacrifice bunt. Báez was booed when he entered as a pinch-hitter in the eighth inning.

The Mets trailed 5-1 before Nimmo hit a two-run homer and Báez legged out a two-out RBI infield single. As Alfaro misplayed Conforto’s hit, which scored Pete Alonso, Báez never broke stride he neared third base and scored the winning run.

“It seemed like everything was kind of going our way just until that ninth inning,” Marlins manager Don Mattingly said.

Even before the wild comeback, there was no shortage of quirkiness in the first game — which official scorer Howie Karpin noted resumed at 1:12 PM after a delay of 4 months, 19 days, 23 hours and 55 minutes.

The Marlins had to replace five starters from April 11. Outfielders Corey Dickerson, Starling Marte and Adam Duvall, as well as pitcher John Curtiss, were all traded while catcher Chad Wallach was waived.

Center fielder Bryan De La Cruz, who began the season with Triple-A Sugar Land in the Houston Astros’ system, replaced Marte and capped the Marlins’ two-run second with an RBI single, which goes into the books as having occurred 110 days before he was acquired by Miami.

The Mets were missing two starters — third baseman Luis Guillorme and catcher Tomas Nido are each on the injured list — from April 11. Patrick Mazeika, who replaced Nido, doubled in the second, giving him a base hit 23 days before his big league debut on May 5.

Taijuan Walker allowed three runs on seven hits with no walks and six strikeouts in 4 2/3 innings in relief of Marcus Stroman, who threw nine pitches April 11 and got one out in his shortest career outing.

JEWEL OF A PLAY

Báez lost an earring near home plate during the celebration, and teammates, coaches, grounds crew and even team president Sandy Alderson were on the ground looking for it. The 73-year-old Alderson was still down on one knee picking through the grass with other team employees nearly half an hour after the final out.

The Mets aired a message on the scoreboard wishing a speedy recovery to radio play-by-play man Howie Rose, who is in his 26th season as one of the team’s broadcasters. Rose covered his final game of the season Tuesday night and is undergoing surgery later this week for a personal medical concern.

Rose stood in his booth, blew kisses and tapped his heart as the crowd applauded and chanted “Howie!” Manager Luis Rojas opened his postgame press conference by offering well-wishes to Rose.

“Our thoughts and prayers are with you throughout this process,” Rojas said. “We love you, man.”

Marlins: RHP Paul Campbell (undisclosed) was placed on the 10-day injured list. RHP Zach Pop, who missed the previous 15 games with a sore right middle finger, was activated. … OF Lewis Brinson went 2 for 3 in the nightcap after missing the previous four games with a sprained left thumb.

Mets: Nido (left thumb) was placed on the 10-day injured list. Nido was also sidelined with a left thumb injury from Aug. 16-27. C Chance Sisco was recalled from Triple-A Syracuse. 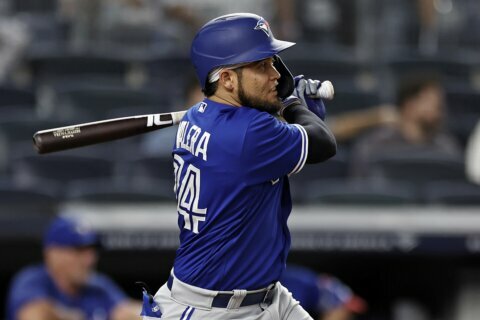