ARLINGTON, Texas (AP) — Rookie DJ Peters connected on a pair of two-run homers, Kolby Allard was solid in his first win in two months, and the Texas Rangers beat the Oakland Athletics 7-4 on Sunday.

Major league rookie home run leader Adolis García hit his 26th for the last-place Rangers, who took the deciding game of the series against the A’s, who dropped into a tie for the AL wild card lead with Boston.

Allard (3-10) allowed Matt Chapman’s third homer in two games among seven hits in 6 1/3 innings, winning for the first time since throwing five scoreless innings at the Dodgers on June 12. The left-hander set a single-season club record by losing eight consecutive starts before a no-decision in his previous outing at Seattle.

“I try not to get too high or too low throughout the season,” said Allard, who had his third consecutive start without a walk. “You know you’re going to take your lumps and have your tough stretches. When we get attacking from the get-go, it seems a lot better.”

Rookie Joe Barlow pitched a scoreless ninth for his second career save, finishing both of Texas’ wins in this series.

Peters hit the fourth-longest home run at year-old Globe Life Field, a 460-foot shot into the second deck above the visiting bullpen in left-center field.

He went the opposite way on the other two-run homer in the fifth for a 7-1 lead for Allard, who entered with the worst average run support among AL pitchers with at least 13 starts at 1.86 runs per outing.

García led off the third with a liner into the seats in left off Sean Manaea (8-8), who gave up a season-high three homers and matched his worst outing this year by allowing seven runs. The lefty struck out five in five innings.

Manaea has allowed 15 runs in his past 11 innings over three outings.

“I thought he was better,” manager Bob Melvin said. “It was just some long balls that got him today. This is a tough stretch for him. A lot of guys go through tough stretches. You’ve got to pitch your way out.”

Chapman’s 16th homer was a solo shot in the second. Mark Canha lined his 12th out to left with the bases empty in the sixth against Allard, who pitched through a cut on his left hand.

The lefty caused a brief delay in the second when he approached Ed Hickox to let the umpire know the cut had left blood on his uniform and the rosin bag. The umpiring crew agreed to let Allard keep pitching.

“Somehow the back of my middle finger knuckle, just kind of sliced it,” Allard said. “It started to bleed a little too much. I just wanted to give the umpire a heads up in case there was blood on the ball.”

Allard left after consecutive one-out singles in the seventh from Chapman, who had three hits, and Stephen Piscotty. Allard allowed three runs.

“He probably could have gotten through it, but at that point, I thought he was getting a little bit tired,” manager Chris Woodward said. “Balls were coming off the bat pretty hard against him.”

Rookie Yonny Hernandez had two hits and a walk, scored twice and drove in a run in his debut as the Texas leadoff hitter.

ALL A’S AND RANGERS

The four longest homers at the retractable roof home of the Rangers are all by Oakland and Texas hitters. Seth Brown of the A’s had the longest at 472 feet on July 10. Sean Murphy hit one 464 feet last Sept. 11, and former Texas slugger Joey Gallo had a 462-foot homer three days before Brown’s blast.

Acquired on waivers from the Los Angeles Dodgers two weeks ago, Peters’ first career four-RBI game came in the 25-year-old’s first start as the cleanup hitter. Of his four homers this season, three are with Texas.

A’s: 2B Josh Harrison was out for a third consecutive game with a strained right quadriceps, but Melvin said he was on track to return Monday.

A’s: RHP Frankie Montas (9-8, 3.98 ERA) is set for the opener of a four-game series in Chicago on Monday. His 51 strikeouts over his past six starts are the most for an Oakland pitcher over six appearances since Todd Stottlemyre had 56 in 1995.

Rangers: RHP Spencer Howard (0-3, 5.61 ERA) is set for his third start since coming over in a trade with Philadelphia. He pitches Tuesday at home against Seattle. Howard was limited to a total of 89 pitches in his first two starts. 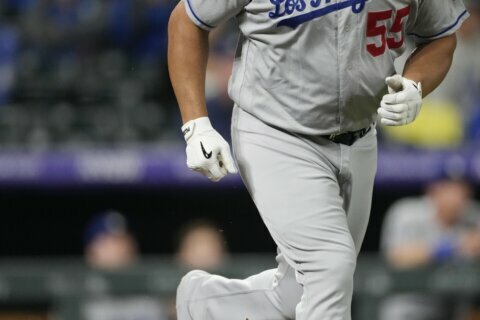