Sean Murphy also homered as the A’s avoided a sweep in their four-game series with AL Central-leading Chicago. Oakland ended a four-game skid and maintained its grip on the second AL wild-card spot.

Olson’s blast in the seventh off reliever Michael Kopech (3-2), his 31st this season, gave Oakland a 5-3 lead.

“That’s what he does,” A’s manager Bob Melvin said. “He gets big hits at big times. That was a huge hit for us, and allows us to go home with at least one win here, which we needed.”

Cole Irvin (9-11) allowed three runs on seven hits in six innings. Yusmeiro Petit and Andrew Chafin pitched a scoreless inning apiece, and Lou Trivino allowed an unearned run in the ninth for his 20th save in 22 opportunities.

Eloy Jiménez put the White Sox ahead with an RBI double in the first. Murphy’s homer tied it in the third, and Tony Kemp drew a bases-loaded walk in the fourth to put the A’s back on top.

Andrew Vaughn put Chicago ahead again with a two-out, two-run homer in the fifth. Chapman tied it with his fifth home run in six games and 19th on the year.

“It wasn’t great, but I kept us in it,” Cease said. “That helps you swallow one like that a little bit easier. But at the end of the day, losing is not fun, so it’s not much of a consolation prize.”

Zack Collins scored for the White Sox in the ninth when shortstop Elvis Andrus collided with Starling Marte while trying to field a popup to center field. Andrus was charged with the error.

A’s pitcher Chris Bassitt greeted his teammates in the clubhouse before the game, two days after he was struck in the head by a line drive.

“That helped today,” Irvin said. “We haven’t seen him since what happened. Just being able to see him and know that he’s in good spirits really just got all of us going.”

Bassitt has a broken bone in his cheek and will need surgery. There is no timetable for his return, but the A’s are encouraged by his recovery thus far.

“He feels remarkably well for what went down the other day,” Melvin said. “Each and every day he seems to feel a lot better and in much better spirits.”

Athletics: OF Chad Pinder (strained right hamstring) will likely return Friday. He has been out since early July.

White Sox: RHP Carlos Rodón is penciled in to return to Chicago’s rotation during next week’s four-game series at Toronto. Rodón has been sidelined since August 7 with shoulder fatigue. 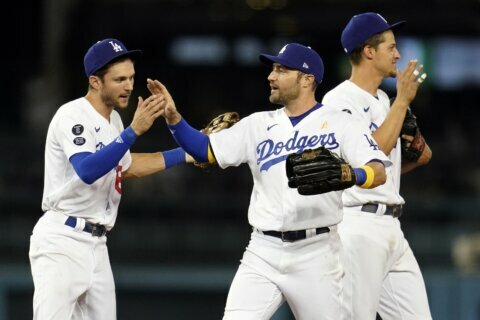