The Cardinals bullpen was pressed into duty after starter Wade LeBlanc exited with left elbow pain. He gave up three runs on three hits in two innings.

“Wade’s dealing with some elbow discomfort. It’s a little tight in there,” St. Louis manager Mike Shildt said. “So, we tried to stay ahead of it. Clearly, it prevented him from being able to continue. He’s a little dejected about it, and so are we, for him. He’s going to go back to St. Louis to get imaging. We’ll see what it looks like. We’re optimistic.”

A pair of homers turned a two-run deficit into a two-run lead for St. Louis in the fourth. DeJong sent a first-pitch curveball from JT Brubaker (4-12) into the left-field bleachers for his 16th homer to tie the game, and pinch-hitter Nootbaar’s first major league homer made it 5-3.

“I thought it had a chance, for sure,” Nootbaar said. “I didn’t, like, square it up completely. But I knew I got it in the air and I got a good piece of it. So, I was running the bases hoping, obviously, it would go.”

St. Louis has won five of six overall and 10 straight games at Pittsburgh. The Cardinals’ last loss at PNC Park came on Sept. 17, 2020.

Colin Moran homered twice for the Pirates, who have been outscored 50-18 during an eight-game losing streak.

“I think we’re handling it good,” Moran said. “There’s a lot of guys here that are getting opportunities, working hard every day to make the most of it. So, I think you have to try not to look at the record. … Work hard and play a good nine innings, play a good game. Try to win the ballgames. We have a lot of guys working real hard.”

T.J. McFarland (2-0) relieved LeBlanc in the third, giving up a leadoff walk before forcing Ke’Bryan Hayes to fly out and Jacob Stallings to ground into a double play.

St. Louis closer Alex Reyes gave up a two-run homer to Bryan Reynolds with one out in the ninth following an error by right fielder Tommy Edman. Reyes struck out the next two batters for his 27th save.

“I see a bullpen that’s very focused and very willing to help the entire team,” said Cardinals reliever Giovanny Gallegos, who allowed four hits in 1 1/3 innings. “Everybody has a job to do and everyone’s being responsible for the job they have to do.”

“Every time I go out there, I’m taking the ball, I feel fresh,” Brubaker said. “I feel good. Body feels good. Physical fatigue definitely isn’t there. Mental fatigue (isn’t) there because I’m not thinking about what could be or what possibly could happen. I’m only focusing on one pitch, one batter at a time.”

Moran’s three-run homer put the Pirates ahead 3-1 in the first. He took reliever Andrew Miller deep to center in the fourth to pull Pittsburgh within 5-4.

Moran hadn’t homered since April 18. It was the second two-homer game of his career.

With the Pirates trailing 6-4 in the seventh, Hoy Park popped out to leave runners stranded on first and third. Anthony Alford struck out four times, the last with two men on in the eighth.

Cardinals: LeBlanc had pitched a season-high six innings in his previous start on Aug. 5. … OF Dylan Carlson left with right wrist soreness after striking out in the fourth inning. He will have an MRI on Friday, Shildt said. … RHP Miles Mikolas’ fifth rehab outing, possibly his last before being activated, will be with High-A Peoria on Aug. 14. He has not pitched in the majors since experiencing right forearm tightness during a start on May 22, which was his first for St. Louis since the 2019 NLCS.

Cardinals: RHP Jack Flaherty (8-1, 2.90 ERA) will return from the 60-day injured list Friday to start the opener of a three-game series at Kansas City. Flaherty has been out since May 31 with an oblique injury.

Pirates: RHP Mitch Keller (3-9, 7.06) will look for his first win in the majors since May 29 on Friday, when he starts the first game of a three-game set against the Milwaukee Brewers. 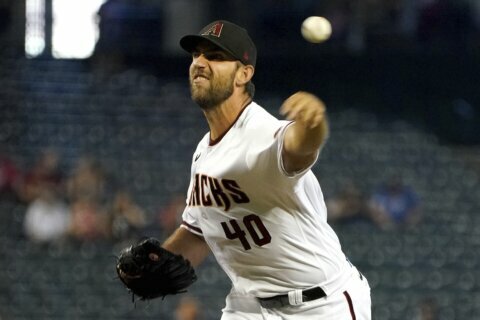 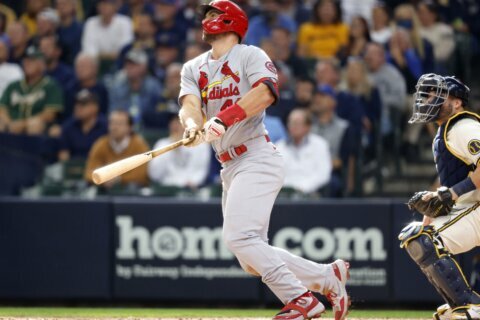