Burnes pitches Brewers by Giants in matchup of NL contenders

Matching up again, Bryant and his new Giants teammates certainly couldn’t figure out the Milwaukee ace.

Burnes struck out nine while tossing scoreless ball into the seventh and singled home a run to help his winning cause, pitching the Brewers by San Francisco 3-1 on Monday night in a matchup of National League contenders.

“I thought I was getting away from him coming over here, but seen him twice now, he’s one of the best in the game,” Bryant said.

Burnes (9-4) didn’t walk a batter and allowed four hits. Brandon Belt led off the seventh with a double and Bryant singled to end Burnes’ night.

“Overall was really pleased with how I threw the ball,” Burnes said. “… For most of the night we were kind of keeping them off balance.”

Brad Boxberger relieved and immediately surrendered Brandon Crawford’s RBI single. But that was it for the NL leaders.

Bryant started the ninth with a double against Josh Hader, who recovered for his 28th save and 10th straight scoreless appearance.

Given the clubs didn’t meet during the shortened 60-game 2020 schedule, Bryant is a player on the other side the Brewers know best.

“He’s obviously been a great addition for the Giants,” Brewers manager Craig Counsell said of Bryant. “He’s a tough out no matter what, he’s a tough guy to go through a bunch. We are very familiar with him, kind of know his strengths, know his weaknesses. Sometimes it’s good, sometimes it’s bad. He’s got knowledge, too.”

San Francisco (84-47), holding onto a narrow lead in the NL West over the defending World Series champion Dodgers as September nears, scrambled before the game when right-hander Johnny Cueto was scratched from his scheduled start because of cold and flu-like symptoms.

Cueto, who tested negative for the coronavirus upon returning last week from a funeral in his native Dominican Republic and again Monday, hadn’t been ruled out to pitch Tuesday in the second contest of a four-game set. The right-hander was was placed on the COVID IL in the meantime.

Lefty reliever José Álvarez (4-2) replaced Cueto to make his eighth career start and on short notice. He was done after 1 2/3 innings as San Francisco made it a bullpen game.

Bryant returned to the Giants lineup after leaving Friday’s game with right side tightness. But San Francisco struggled at the plate again a day after taking a 9-0 beating in the series finale at Atlanta.

“The bottom line is they just shut us down,” Kapler said. “We weren’t able to get anything going.”

Brewers: SS Willy Adames still wasn’t ready to play the field after playing designated hitter the previous two games against Minnesota as he deals with a sore left quadriceps muscle. The Brewers didn’t take groundballs before the game to give him a chance at testing his leg. … Counsell is hopeful RHP Freddy Peralta, working back from an inflamed pitching shoulder, will come off the IL to pitch Friday against the Cardinals. … 3B Eduardo Escobar (strained right hamstring) also could be ready to return against St. Louis.

Giants: LHP Alex Wood tested positive for COVID-19 and is experiencing symptoms. While Wood has headaches and a sore throat — “he is not feeling well at all,” Kapler said — he hasn’t needed to be hospitalized so far. Wood is 10-4 with a 4.08 ERA in 23 starts this season. … 2B Tommy La Stella was also a late scratch with tightness in his left side.

RHP Brandon Woodruff (8-7, 2.38 ERA) takes the mound for Milwaukee looking to win back-to-back starts for the first time in more than two months.

The Giants starter hadn’t been determined, with Cueto’s health playing a factor. Kapler said the pitcher came in for treatment and received a couple of bags of IV fluids and medication. 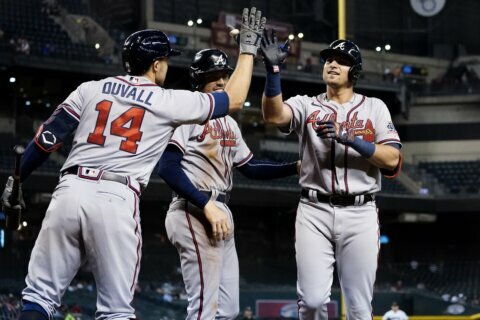 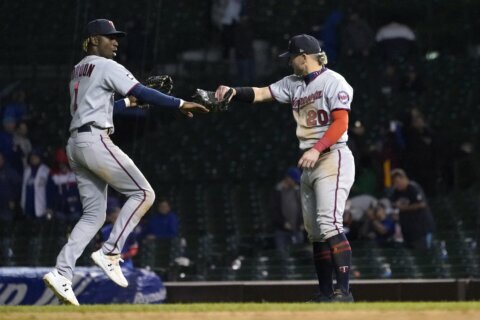 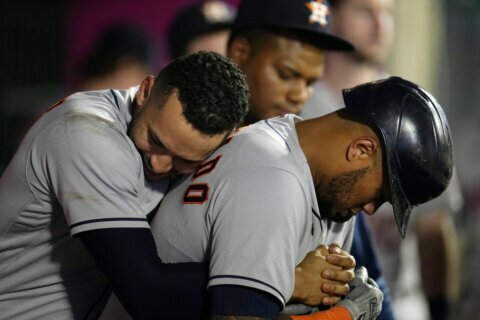