CLEVELAND (AP) — Jonathan Araúz arrived late to the ballpark — and right on time for the Red Sox.

Araúz hit a three-run homer in the eighth inning after being recalled before the game due to Boston’s COVID-19 case, sending the Red Sox to a 4-3 win on Friday night over the Cleveland Indians.

After twice missing bunt attempts, Araúz drove a 3-2 pitch from James Karinchak (7-4) over the wall in right to rally the Red Sox, who began the series by placing infielders Kiké Hernández and Christian Arroyo on the COVID-19 injured list.

Araúz was asleep in his hotel room in Buffalo with Triple-A Worcester when he got the call that the Red Sox needed him. He bagged his bags, got on a team bus with teammate Yairo Muñoz and headed toward Cleveland.

“Everything happened really quick,” he said through a translator.

A few hours later, he was hero for the Red Sox.

“It was such a tough day and obviously grinding and everything that went on, it was huge,” Red Sox manager Alex Cora said. “I don’t want to say we needed this one, but it felt awesome to pull this out.”

The Red Sox were down 3-1 and had managed only one hit through seven innings off starter Logan Allen and reliever Alex Young before storming back in the eighth against Karinchak.

The right-hander walked Christian Vázquez and gave up a single to Jarren Duran before Araúz failed at two bunt tries. He wasn’t going to miss another pitch.

“I was upset with myself,” he said. “I knew I had to move the runners over somehow. I had to do something for missing the bunt. Thank God I was able to put a good swing on that pitch and hit the ball out.”

It was Araúz’s first homer this season, the second of his career and just what the Red Sox needed.

José Ramírez hit a two-run homer off Eduardo Rodriguez (10-7) and Yu Chang added a solo shot — his third in three games — for Cleveland.

The Indians got the tying run to second in the ninth before Adam Ottavino got three outs for his ninth save.

Rodriguez was headed for a tough loss before Boston’s rally. He allowed three runs and eight hits in seven innings.

The Red Sox were dealt a setback before the game when they lost Hernández and Arroyo for at least a week. Cora said Hernández was experiencing COVID-19 symptoms while Arroyo was ruled out due to close contact with his teammate.

The loss of two regulars in the heat of a playoff chase left the Red Sox scrambling at the start of a seven-game trip.

Araúz stopped things from getting any worse. He’s excited about the chance to do more.

Ramírez connected for his 30th homer in the fourth to put the Indians up 2-0.

Amed Rosario, who has been one of baseball’s best hitters since the All-Star break, led off with a single and Ramírez followed by driving a 3-2 pitch from Rodriguez onto the pedestrian plaza in left field.

Allen’s wildness helped the Red Sox get a run back in the fifth. But other than that, Boston’s hitters did little against the left-hander, who allowed one run and one hit over six innings in his first start since July 5.

“It felt really good to compete again, especially at the major league level,” Allen said. “It was really good to get through six. It was a step forward in the right direction and hoping to continue to do what I’m doing right now.”

Indians acting manager DeMarlo Hale stays in touch with manager Terry Francona, who recently had hip replacement surgery and is set for a procedure on his toe.

Hale said most of the conversations center on Francona’s heath, and he joked his boss may not always agree with his moves.

“I’m sure he throws a sock or something at the TV every now and then,” Hale said.

Red Sox: With Hernández and Arroyo both out for the next week or more, Cora said there could be other roster moves in the next few days.

Red Sox: RHP Nathan Eovaldi (10-3, 3.72) got a no-decision in his previous start despite not allowing an earned run in seven innings.

Indians: RHP Cal Quantrill (4-2, 3.04) is coming off his gem in last week’s Little League Classic. He didn’t give up a run and allowed two hits over seven in beating Shohei Ohtani and the Angels. 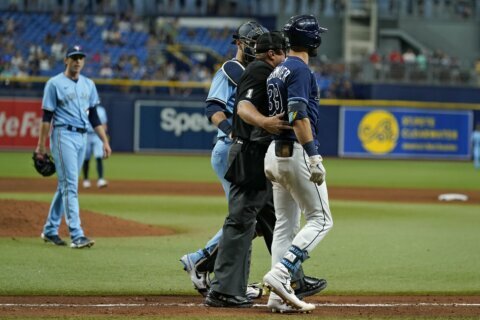