All of their “Let’s go Mets!” chants got minimal pushback at this Subway Series opener, what with many Yankees fans sensing this season has already gone off the rails.

Walker took a no-hitter into the sixth inning, Nimmo provided a spark in his return from the injured list and the New York Mets beat the crosstown Yankees 8-3 Saturday to open a three-game set.

The Mets already led 8-0 when Aaron Judge homered with one out in the sixth to end Walker’s bid for the record-tying eighth no-hitter in the majors this season. He was lifted after 5 2/3 innings having allowed two runs, two hits and two walks, striking out five on 106 pitches.

The right-hander’s ERA rose slightly to 2.44 during a breakout season after signing a $23 million, three-year free agent contract in February. The Mets are pushing for the 28-year-old to be a first-time All-Star when rosters are revealed Sunday.

“I’m definitely anxious to find out,” Walker said. “But right now, it’s out of my hand.”

Walker (7-3) got a standing ovation as he left from thousands of Mets fans among the season-high crowd of 40,047 at Yankee Stadium — the highest attendance for either New York team since before the coronavirus pandemic.

“It was felt,” Rojas said. “It was loud, it was electric. I think the guys missed it.”

Playing for the first time since a brutal 11-8 loss to the Los Angeles Angels on Wednesday, the Yankees slogged through another frustrating defeat with just three hits, all in the sixth inning. They have dropped six of seven and fell to 41-40 after starting the day 9 1/2 games behind AL East-leading Boston.

“We can talk about it until we’re blue in the face,” Boone said. “We’ve got to put together complete games, especially when we’re going up against good opponents.”

Nimmo had three hits along with a hard lineout in his first game since a detached hand ligament sidelined him two months ago. The Mets leadoff hitter lifted his average to .333 and his on-base percentage to .435 after struggling during a minor league rehab assignment.

“I did surprise myself a little bit,” Nimmo said. “But I was really, really glad to be able to help, be able to get on base, be able to create some traffic for some guys, and guys really came through with some big hits.”

Jordan Montgomery (3-3) stranded five Mets baserunners over the first three innings to keep it scoreless, but the visitors broke through in the fifth.

Nimmo hit a one-out single, Francisco Lindor followed with another and Dominic Smith scored Nimmo from second with a single up the middle.

Montgomery walked Pete Alonso to load the bases and was replaced by Lucas Luetge. James McCann made it 2-0 with a broken-bat single, and Smith scored from third on a wild pitch for a three-run lead before Luetge ended the inning.

The Mets batted around during a five-run sixth inning that included a two-run double by Smith and another two-run hit by Kevin Pillar. All the runs were charged to Justin Wilson.

Smith had three hits and three RBIs, and Lindor had two hits and two walks.

Yankee Stadium was filled nearly to capacity despite sporadic showers after Friday’s scheduled opener was postponed by rain. Blue and orange was well represented.

Some Yankees fans tried to drown out “Let’s go Mets” chants with boos, but they had little to cheer about themselves. The Yankees’ follies were frustratingly familiar — a passed ball by catcher Gary Sánchez, an error by shortstop Gleyber Torres, and of course, the lack offense from anyone besides Judge.

Mets: LHP David Peterson has a right oblique strain and is week to week. … RHP Carlos Carrasco, sidelined since March with a torn right hamstring, could join the rotation in late July or early August. … RHP Noah Syndergaard (Tommy John surgery) resumed playing catch about a week ago and is throwing out to 75 feet. … INF Jonathan Villar (strained right calf) could rejoin the team Sunday.

Yankees: A series of tests have ruled out several potentially serious causes for OF Clint Frazier’s bout of vertigo this week, but he is slated for more evaluation next week. Frazier left Wednesday’s game against the Angels with dizziness and was placed on the 10-day injured list Friday. Manager Aaron Boone said tests so far have not found a connection between the vertigo and a concussion Frazier had three years ago that hampered him for an entire season, but the team needs to do more testing to rule out a link. … LHP Zack Britton (hamstring) threw off a mound Saturday. He’s eligible to return from the IL on Monday.

Yankees ace Gerrit Cole (8-4, 2.66) will pitch the opener of Sunday’s split-doubleheader against Mets RHP Marcus Stroman (6-6, 2.45). Yankees LHP Nestor Cortes Jr. (0-0, 1.02) will start the nightcap, likely against an opener for the Mets, who decided to save rookie starter Tylor Megill (0-0, 4.82) for Monday’s nine-inning game against Milwaukee. 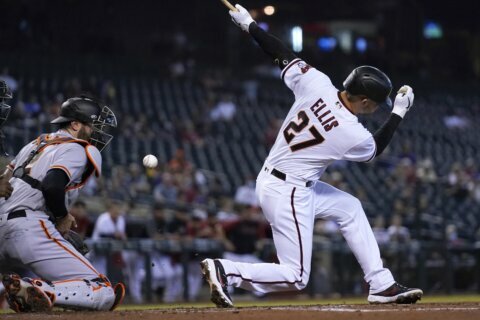