Ober, making his 11th career start, allowed one run on four hits over four innings. He struck six and did not walk a batter.

He built upon that effort with another solid performance on Saturday,

Ober was just as pleased with his second-inning single, which came in his first major league at-bat. He said the last time he came to the plate was in high school.

“When I got up there and looked over at the pitcher and he looked way closer than I ever remember,” Ober said. “I saw the pitch was going to be in the zone, so I took a swing. I made contact, I had no clue where the ball went. I started running a little bit and heard some cheers (from the dugout).”

Ober grounded out in the third inning to drop his average to .500.

“It’s tough to take a bat like that out of the lineup,” Baldelli joked about removing his hurler after four innings.

Ober fanned the side in the second inning and retired seven of the first eight hitters he faced.

“He had good extension on the ball,” said St. Louis outfielder Harrison Bader, who drove in the Cardinals’ lone run with a fourth-inning single. “His timing was kind of funky.”

Jeffers hit two home runs, including his first grand slam, and drove home six in a 17-14 loss to Detroit on Wednesday. He drilled his ninth home run of the season off St. Louis starter Jake Woodford (2-3) to highlight a five-run third inning that made it 7-0.

Minnesota scored twice in the opening inning. Miguel Sano paced the outburst with a run-scoring double.

Luis Arraez, who came off the 10-day Injury List earlier in the day, doubled to bring home the first run in the third inning. Brent Rooker and Jorge Polanco started the surge with singles. Trevor Larnach added a sacrifice fly to set the stage for Jeffers.

“I don’t actually have any concern about the energy of our group in any way,” Baldelli said. ”I have great faith in our guys. We’ll continue to go out there, play hard, play well, keep each other going.”

Jorge Alcala (3-5) picked up the win with two innings of scoreless relief.

St. Louis had won eight of its previous 12. The Cardinals fell to 202-202 in interleague play.

Former St. Louis catcher Ted Simmons, who is going into the Hall of Fame on Sept. 8, was honored prior the contest by having his No. 23 retired. He is the 15th person connected with the organization to have a number retired. A statue of Simmons was unveiled outside the stadium earlier in the day. “All of (my) dreams have come true,” Simmons said.

Twins: INF Josh Donaldson missed his second game in a row because of hamstring tightness.

“He got some treatment, he swung the bat, moved around a little bit,” Baldelli said. “If it were a more serious situation, we wouldn’t be doing any of that today. We’ll continue to treat it as day-to-day.”

RHP Adam Wainwright (8-6, 3.51) will face RHP Michael Pineda (4-5, 3.86) in the final game of the three-game series Sunday. The 39-year-old Wainwright has beaten 25 of 29 major league teams — but not Minnesota. Texas, Baltimore and the New York Yankees round out the list. Pineda is 1-1 with a 3.86 ERA in two interleague starts this season. 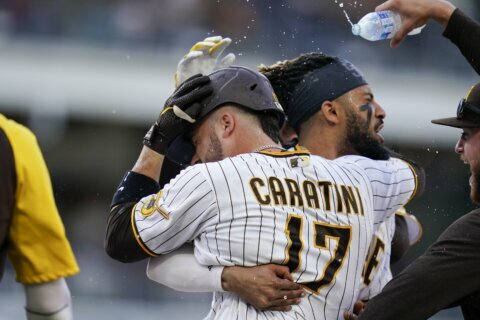