Rookie Jarren Duran hit his first major league homer, Dylan Santana and Rafael Devers also went yard, and J.D. Martinez broke out of a slump with four hits as the Red Sox opened the three-game series by improving their AL-leading road record to 29-19.

Manager Alex Cora was pleased with how the Red Sox responded after he shook up the lineup coming off a 2-6 stretch.

“Where we are at right now, we are not going to surprise people,” Cora said. “We are in first place in the American League East. And we have to show up every single day. Every single day. And we’ve done a great job throughout the season. But there was an it-factor today.”

Toronto used eight pitchers and had its five-game win streak halted. Blue Jays starters had not allowed a run in the last four games.

The Red Sox broke loose for eight runs in the first inning, more than the six they scored in a three-game weekend series against the rival New York Yankees. They matched their scoring output from consecutive losses to the Yankees when Duran homered to the opposite field following a leadoff double from Hernández.

Not long after, Renfroe’s sixth career grand slam chased Blue Jays starter Ross Stripling, who gave up six runs on four hits and two walks while getting only one out in his first appearance this season that didn’t extend into at least the fourth inning.

The three home runs were the most the Red Sox have hit in a single inning this season, and it was the first time in history the team has homered three times in the first inning of a road game, according to Elias Sports Bureau.

“It takes a lot of pressure off a pitcher in that situation,” Pivetta said. “It’s really positive stuff and it sets a tone for this series. Who we are and what we want to accomplish here.”

Hernandez, who was 1-for-17 over his last five games, homered off Anthony Kay for his second extra-base hit of the first inning. Devers led off the second with his 23rd home run. Santana hit a two-run double that made it 11-0 after two.

Santana slugged one to deep right-center in the fourth inning and the Red Sox got their sixth home run of the game when Hernandez recorded his sixth multi-homer game and 500th career hit in the sixth inning.

Cavan Biggio homered for the Blue Jays during a four-run rally in the fourth inning. Teoscar Hernandez, Randal Grichuk and Bo Bichette also drove in runs.

The right-hander’s six earned runs matched a season-high set in a May 19 loss against the Red Sox in Dunedin, Florida, the Blue Jays’ temporary home to start the season.

Stripling said he felt physically sharp during warmups, but has been distracted by the team’s relocation to Toronto later this month.

“On Wednesday, I’m going to have to say bye to my family for two months, which is actually weighing on me much harder than I want it to be,” Stripling said. “When you don’t have your good stuff and you’re not 100% mentally focused, that lineup can punish you. And that’s what they did.”

Many in the season-high crowd of 12,811 at Sahlen Field favored the Red Sox. This is the last of eight series the Blue Jays will play in Buffalo after the team received approval from the Canadian government to return to Toronto at the end of the month. They are 12-10 in the home of their Triple-A affiliate after going 10-11 at their spring training site in Dunedin, Florida. Their 43 home games are the lowest in the majors.

The 24-year-old Duran delivered after being moved up to second in the batting order. He batted sixth and seventh in his first major league games against Yankees.

Alex Verdugo (three walks) dropped from second to sixth in the order. Martinez moved down to fifth from third, while Xander Bogaerts moved up one spot to third, and Devers batted cleanup.

Red Sox: Placed 1B Christian Arroyo on the 10-day injured list after he strained his left hamstring while stretching for a throw Sunday in his first career appearance at first base. This is Arroyo’s third injured stint of the season, after he missed 16 games in May with a left hand contusion … Santana (right quadriceps) returned to the lineup for the first time since July 6 to replace Arroyo. … LHP Chris Sale will continue his recovery from Tommy John surgery by making his second rehab start for Double-A Portland on Tuesday

Blue Jays: Added RHP Alex Manoah (right back contusion) to the 10-day injured list, retroactive to Friday when he slipped on wet steps entering the home clubhouse at Sahlen Field. Manoah was scheduled to start Tuesday. … Put RHP Anthony Castro (right ulnar nerve irritation) on the 10-day injured list, retroactive to July 12 and reversed his option to Triple-A Buffalo. … Placed INF Breyvic Valera on the family medical emergency list. … Called RHP Thomas Hatch and OF Jonathan Davis up from the minors. Hatch was placed on the 60-day injured list at the start of the season with right elbow inflammation and reinstated July 6.

RHP Garrett Richards (5-5, 4.91 ERA) is scheduled to start for the Red Sox on Tuesday in the second of the three-game series. The Blue Jays haven’t announced their starter, but it could be Hatch, manager Charlie Montoyo said before Monday’s game. 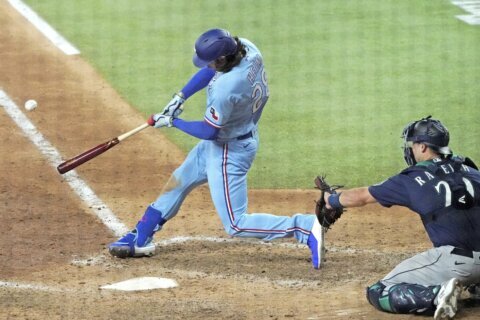 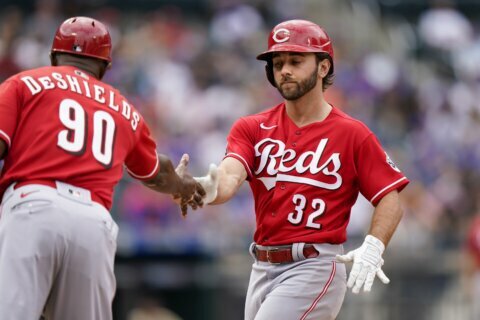