That’s foreboding for the rest of baseball, and it was bad news for the AL-leading Red Sox.

The Angels’ two-way star yielded two runs and struck out four, winning his matchup with fellow All-Star Nathan Eovaldi in their final mound starts before next week’s game in Denver. Ohtani (4-1) didn’t walk a batter in a strong rebound start after a terrible outing last week at Yankee Stadium, where he walked four in the first inning.

“I felt like I had good rhythm, good mechanics,” Ohtani said through his translator. “It was a lot different from my last start. … I’m a student of the game, and this is my fourth year, so I do feel like I need to grow every year, and I think I’ve been able to do that.”

Although he went 1 for 4 at the plate and failed to homer for the second straight game after hitting 14 in his previous 17 games, Ohtani still cracked a double in the first inning that drove in the Angels’ first run. He has a 1.054 OPS to go with his 3.49 ERA roughly halfway through the season.

“We all romanticize what it would have been like to watch Babe Ruth play,” Angels manager Joe Maddon said. “You hear this stuff, and it’s a larger-than-life thought or concept. Now we’re living it. So don’t underestimate what we’re seeing. We always romanticize the past, and sometimes you miss what’s going on right in front of your very eyes.”

Ohtani looked comfortable again at Angel Stadium, where he has a 1.87 ERA in eight starts. He pitched steadily into the late innings and had several moments of brilliance: In one at-bat against Danny Santana, he followed a 67-mph curveball with a 97-mph fastball.

Stassi hit a two-run homer and doubled and singled for the Angels, while David Fletcher went 4 for 4 in their fifth win in six games.

Raisel Iglesias gave up Hunter Renfroe’s two-strike, two-out homer in the ninth, but finished strong for his 17th save.

J.D. Martinez drove in both of Boston’s runs against Ohtani, but the Red Sox lost for just the second time in 12 games.

Eovaldi (9-5) yielded nine hits and five runs while pitching into the sixth inning. The right-hander struck out nine, but the Angels matched the second-highest hit total against Boston’s All-Star selection this season.

“The Stassi at-bat where he hit that home run, that’s one I wish I could have back,” Eovaldi said. “We were behind the entire game after that. Their defense had a couple of really nice plays out there. I was able to keep it to soft contact after that, but they just kept finding ways on the basepaths.”

But after Fletcher extended his hitting streak to a career-best 20 games with a double on Eovaldi’s first pitch, Ohtani drove him home with a sharp double to right. Stassi followed two batters later with his sixth homer.

Ohtani kept Boston off the board again until the sixth when Connor Wong doubled and scored on Martinez’s single.

Eovaldi left after issuing his first two walks in the sixth, and Fletcher beat out an RBI infield single that put Los Angeles up 5-2 before Brandon Workman struck out Ohtani with the bases loaded to end it.

Angels center fielder Juan Lagares ended the sixth inning by robbing Xander Bogaerts of a two-run homer, timing his leap perfectly. The catch was payback for the Angels, who lost a homer to Hernández’s glove on Monday.

“Lagares made a great play,” Ohtani said. “I think that was a homer in most ballparks.”

Fletcher’s hitting streak is the longest in the AL this season and the longest for the Angels since Kendrys Morales also got a hit in 20 straight in 2009.

Angels: 3B Anthony Rendon went on the 10-day injured list for the third time already this season with a left hamstring problem. The $245 million slugger has six homers, and he will miss 31 of the Angels’ first 89 games.

Andrew Heaney (4-6, 5.40 ERA) tries to bounce back after posting a 9.64 ERA in his last three starts when he takes the mound for the Halos in the series finale. Boston counters with Eduardo Rodríguez (6-4, 5.42), who threw six scoreless innings in Oakland last week. 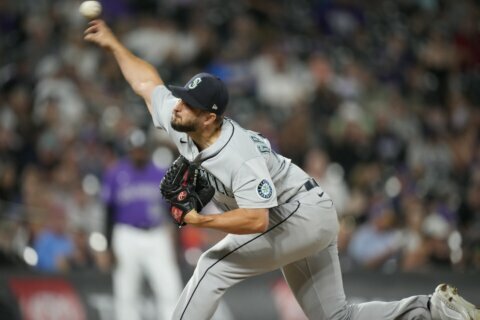 Astros, Mariners pull off trade while facing one another 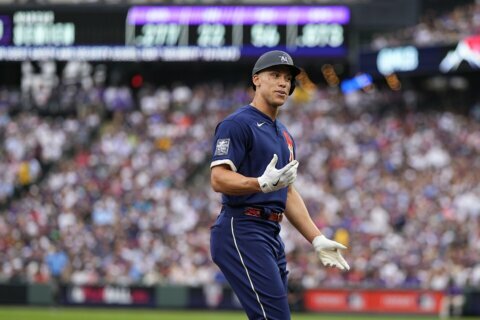