GUARDIANS OF THE GAME

After more than 100 years, the Cleveland Indians are getting a new name — the team will be called the Guardians next season.

The name change, which has its supporters and critics among Cleveland’s fan base, ends months of internal discussions triggered by a national reckoning for institutions and teams to drop logos and names considered racist.

“We do feel like we’re doing the right thing and that’s what’s driving this,” club owner Paul Dolan said Friday. “I know some people disagree, but if anything I’ve gotten more and more comfortable that we’re headed in the right direction.”

The organization spent most of the past year whittling down a list of potential names that was at nearly 1,200.

Cleveland’s new name was inspired by the large landmark stone edifices — referred to as traffic guardians — that flank both ends of the Hope Memorial Bridge, which connects downtown to Ohio City.

The pitching-depleted Mets have boosted their rotation by getting left-hander Rich Hill from Tampa Bay.

“I think a lot of people in the game know the name — guy that’s been around, pitching good baseball, pitching playoff baseball,” Mets manager Luis Rojas said. “It’s a great fit, great acquisition. Our front office is being diligent. One of the needs we’ve talked about is our starting pitching need and this is a guy that fits right in.”

Rojas said he didn’t know yet when Hill could slot into the Mets’ rotation. New York does not have scheduled starters yet for Sunday’s series finale against Toronto or Monday’s doubleheader against Atlanta.

LOOKING FOR A REBOUND

San Francisco righty Kevin Gausman (9-3, 1.84 ERA), one of the reasons the Giants are this season’s surprise team, starts against Pittsburgh looking to bounce back from his worst outing this season. He lasted only three innings in the Giants’ 7-2 win against the rival Los Angeles Dodgers on Monday night. He allowed two runs and three hits — including two home runs — while walking three and striking out five.

Nationals star Stephen Strasburg won’t be back on the mound in the near future.

The 2019 World Series MVP hasn’t pitched since June 1 and has had some neck discomfort recently.

“We backed him down again,” manager Dave Martinez said Friday. “I know they’re going to look at some different options, probably see if we can find another specialist for him to go see.”

The 33-year-old righty is 1-2 with a 4.57 ERA in five starts this year. He was 0-1 in two starts and slowed by health problems during the pandemic-shortened season last year.

The age-old practice of stealing signs put down by catchers might become history if testing of an experimental electronic device is successful.

Major League Baseball is giving catchers in the Low A West league the option starting Aug. 3 to use a 12-button transmitter that can be strapped around their wristband with Velcro. Receivers fit inside the sweatband of a pitcher’s cap and the padding of the catcher’s helmet. A tiny speaker is included, with the volume designed so only the player, and not nearby opponents, can hear.

Developed by a company called PitchCom, the device is programmed for signals in English and Spanish. Clubs can add languages on their own, such as Japanese and Korean. MLB hopes the devices will cut down on time spent by pitchers stepping off the rubber and changing signals.

In a major scandal in 2017, the Houston Astros were found to have stolen catchers’ signs using a video camera in the outfield and relayed those signals to batters by banging on a trash can during their run to the World Series title. 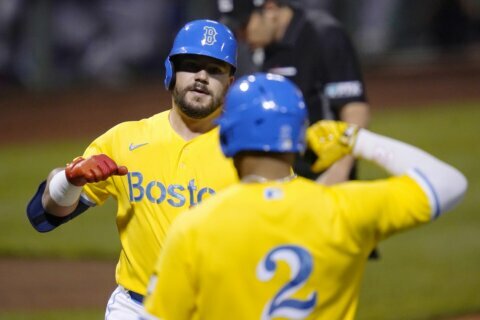 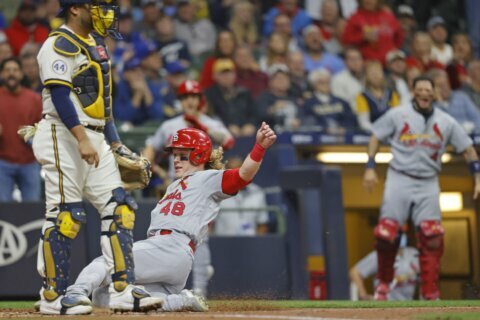 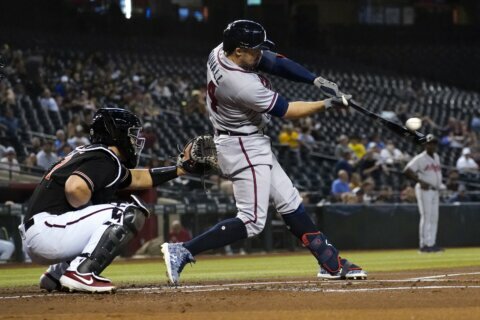 Braves’ Duvall ends up with single on ball that clears fence