DETROIT (AP) — Robbie Grossman and Eric Haase homered as the Detroit Tigers extended their winning streak to five games with a rain-delayed 4-1 win over the Texas Rangers on Tuesday night.

The Rangers have lost seven straight and been outscored 43-3 in five games since the All-Star break. They were shut out in the previous three before Tuesday.

“I was really upset yesterday, but I was a lot happier today,” Texas manager Chris Woodward said. “We had better at-bats and better swings. We just got beat.”

Tarik Skubal (6-8) got the win, giving up one run and four hits in six innings. He struck out four and did not walk a batter.

“The Rangers are really aggressive, so I knew if I could throw a sinker early in the count, I could probably get a groundball,” Skubal said. “When I can do that, I don’t worry about the strikeouts.”

Three relievers finished for the Tigers. Gregory Soto struck out the side in the ninth for his ninth save.

“Skubal has really good stuff, and those three guys at the end were just filthy,” Woodward said. “It’s going to be tough to beat that team at the end of games.”

Dane Dunning (3-7) allowed three runs and four hits in 4 2/3 innings before being removed as the Rangers try to limit his workload.

“I felt pretty good out there. I just made two mistakes and they hit them out,” Dunning said. “I understand why they are keeping my pitches down, but I really wanted to get that last out in the fifth.”

The game started 2 hours, 10 minutes late due to thunderstorms in the area.

“I think it says a lot about our team that, even with a last-minute rain delay that went two hours, we came out hungry and ready to go,” Tigers manager A.J. Hinch said.

The Rangers appeared likely to end their scoring drought in the first inning, putting runners on first and third with one. But then Joey Gallo popped out and the Tigers foiled a double-steal attempt when first baseman Jonathan Schoop’s throw got Eli White at the plate.

“That’s just a mistake,” Woodward said. “The runners have to realize they aren’t going to throw to second on that play. That’s something we can fix.”

Instead, Detroit took a 1-0 lead in the first on Grossman’s homer over the out-of-town scoreboard in right-center field.

“I thought you could really sense the shift in momentum after the first inning,” Hinch said. “We made a nice defensive play to get out of the top of the inning and Robbie goes up there with a plan to attack one and hits it out. That’s huge.”

The Rangers tied it in the fifth on Andy Ibanez’s RBI double, ending their scoreless streak at 27 innings — their longest since a 28-inning drought in July 1972.

Haase made it 2-1 in the bottom of the inning, hitting his 14th homer. Schoop added an RBI single off Jay Sborz, and Harold Castro gave the Tigers a 4-1 lead with a run-scoring single in the sixth.

Detroit optioned RHP Alex Lange to Triple-A Toledo after the game and will recall RHP Matt Manning to start Wednesday against the Rangers.

The Tigers announced before the game that RHP Spencer Turnbull will undergo Tommy John surgery this month. Turnbull, who no-hit the Seattle Mariners on May 19, is expected to miss the rest of this season and most of 2022.

Tigers INF Niko Goodrum, LHP Ian Krol and OF Akil Baddoo delivered 275 cases of water to the residents of Flint, about an hour north of Comerica Park. The city has been dealing with lead-tainted water since 2014. 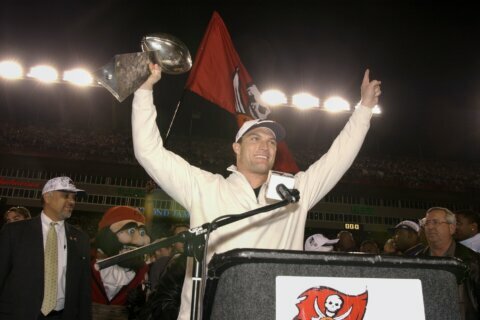