Altuve homers twice in milestone game as Astros down Indians

HOUSTON (AP) — On a night dedicated to Jose Altuve’s accomplishments, the Houston Astros’ star added to his already stellar resume with another huge game.

Altuve celebrated the 10th anniversary of his major league debut with a leadoff homer, and made the milestone twice as nice with a second shot on his next at-bat, leading the Astros to a 9-3 win over the Cleveland Indians on Tuesday night.

“The last three or four days have been a lot of emotions going through my body,” he said. “It’s not easy to get to 10 years. This is very special to me. It means a lot, (and) with the team I have and the teammates I have, this is even more special.”

On Tuesday night, the now married father of two daughters outshined that inauspicious start in his first at-bat when he connected off rookie Triston McKenzie (1-4) for his seventh leadoff homer this season to put Houston up early.

Altuve’s second homer sailed down the left field line, and he stood at home plate for several seconds watching to see if it would stay fair before beginning his trot to first base as the ball clanged off the foul pole.

“That was pretty awesome,” manager Dusty Baker said. “Evidently he was energized by the fact that it was his 10th year. That was truly a way to celebrate your 10th year in the big leagues.”

Kyle Tucker added a two-run homer as Houston broke the game open with a six-run fifth inning that made it 8-0, and the Astros sailed to their third straight win.

In between his homers, Altuve, who leads the Astros with 22 home runs, wowed on defense. Ernie Clement hit a liner to start the third, and Altuve made a leaping behind-the-back catch to rob him of a hit.

“Great catch,” Garcia said. “I was super happy for him and for me, too because that was a hit.”

Altuve, who at 5-foot-6 was repeatedly told he was too small to play in the majors before signing with the Astros, reflected on how far he’s come before the game.

“It’s one thing to dream as a kid to play in the big leagues and another thing is actually making that dream come true,” he said. “This is way better than what you dream.”

Altuve was honored with a pregame video highlighting some of the many highlights he’s had in building a career as one of the greatest Astros. The 2017 MVP and three-time batting champion tipped his cap to the crowd during a rousing ovation at its conclusion.

“I would have been happy just clapping for him acknowledging his 10 years,” Cleveland manager Terry Francona said. “He didn’t need to do that. He’s been a really good player for a long time. I don’t like to see him beat us like that, but he’s good for the game.”

McKenzie struggled on Tuesday after allowing just one hit in seven scoreless innings in his last start. He permitted a career-high eight hits with five runs in four-plus innings.

“I was sticking to the plan, attacking the zone,” McKenzie said. “I felt like it backfired against me a little bit with a lot of balls in play.”

Amed Rosario hit an RBI double and Cesar Hernandez drove in two runs with a double as the Indians scored three runs in the eighth.

Indians: Francona said the next step in the rehabilitation process for reigning AL Cy Young winner Shane Bieber will be to throw from 75 or 90 feet. Bieber threw from 60 feet on Monday in his first time throwing since he was shut down in June with shoulder soreness. … 1B Bobby Bradley left the game in the bottom of the seventh inning with lower back spasms.

Houston shortstop Carlos Correa snapped a 0 for 29 slump with a double in the sixth inning. Correa, who missed time recently with a stomach bug, pumped his arms in the air and smiled broadly after he reached second base. 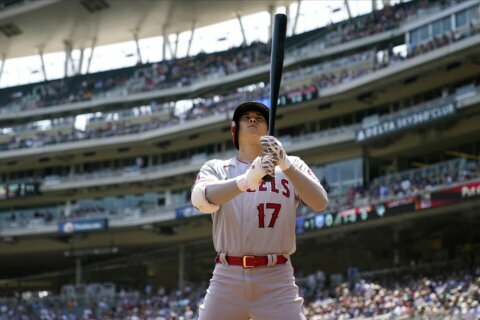 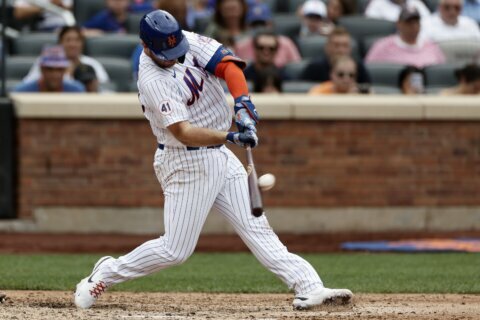