ST. PETERSBURG, Fla. (AP) — Shohei Ohtani led off by homering for the seventh time in nine games, a long drive off an overhanging catwalk, but the Tampa Bay Rays edged the Los Angeles Angels 4-3 Friday night when pinch-hitter Brandon Lowe was hit by a pitch with the bases loaded.

Moved up to the leadoff spot, Ohtani hit a drive estimated at 453 feet off the D-ring in right field at Tropicana Field, only the 39th ball to reach that spot since the park opened in 1998.

“I’ve never seen that in a game or batting practice,” said Angels manager Joe Maddon, who managed the Rays from 2006-14.

It was Ohtani’s 24th homer, extending a career high. He began the night one behind Vladimir Guerrero Jr. for the major league lead. Guerrero also homered in his game against Baltimore.

“We know what a talent Ohtani is,” Rays manager Kevin Cash said. “He showed us multiple ways today.”

Ohtani had a bunt single in the third and finished 2 for 4.

Ohtani is the first player to hit a leadoff homer and get a win as a pitcher in the same season since Jimmy Ryan of the Chicago Cubs and Baltimore’s Kid Madden in 1891, according to the Elias Sports Bureau.

“He’s a freak,” said Rays pitcher Shane McClanahan, who will start Saturday’s game. “How do you throw a 100 and hit 450-foot home runs? He’s a one-of-a-kind player.”

Lowe was hit by Steve Cishek’s pitch with the score 3-all in the seventh inning. Yandy Díaz and Ji-Man Choi walked to start the inning against José Suarez (2-1).

After Wander Franco flied out, Austin Meadows’ pop to shallow left dropped between three defenders and loaded the bases. The umpires opted not to call an infield fly on the play, and Los Maddon came on the field and had a discussion with plate umpire Bill Miller.

Collin McHugh (2-1) went 1 1/3 scoreless innings to get the win. Diego Castillo worked the ninth for his 12th save.

“It’s special,” Cash said. “This is a special job to have. I’m so appreciative of the people I get to work with, and certainly the players. You get these wins because of the talent you have.”

Anthony Rendon also homered in the first off Andrew Kittredge for the Angels, who have lost four straight.

The Rays have won three straight games after a season-high seven-game losing streak.

Meadows had a two-run single during a three-run first against Griffin Canning as the Rays took a 3-2 lead. The first run scored when left fielder Taylor Ward was charged with an error after dropping Franco’s line drive.

Los Angeles tied it at 3 in the third when David Fletcher doubled off Josh Fleming and later scored when catcher Francisco Mejía dropped a throw from first baseman Choi on Jared Walsh’s grounder.

Franco, who homered and doubled in his major league debut on Tuesday, went 0 for 4 and is hitless in his last 12 at-bats.

CF Mike Trout (right calf strain) is still not expected back until after the All-Star Game next month but is improving.

“It’s definitely happening, trending in the right direction,” Maddon said. “He’s going to get to the point very soon of getting more active physically regarding testing things. Everything is going well, so we’re all excited about that.”

Maddon, who led the Rays to the 2008 AL pennant, is managing his second series as an opposing skipper at Tropicana Field.

He had an eventful pregame, getting inducted into the Sports Club of Tampa Bay Hall of Fame at a luncheon and then having his 1959 El Camino break down in the ballpark parking lot due to a broken cable.

Maddon was disappointed because the car had been running so well.

“I love driving it when I get here,” Maddon said. “It’s a great vehicle.”

Angels: OF Justin Upton (right low back strain) went on the 10-day IL. 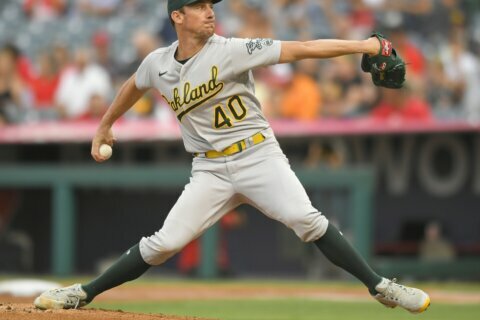 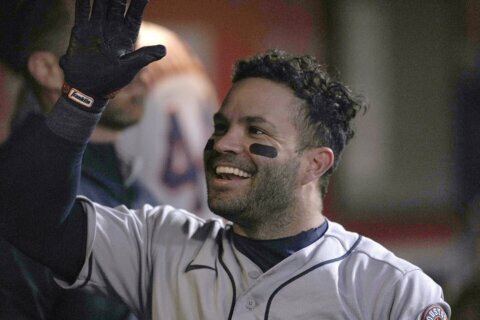 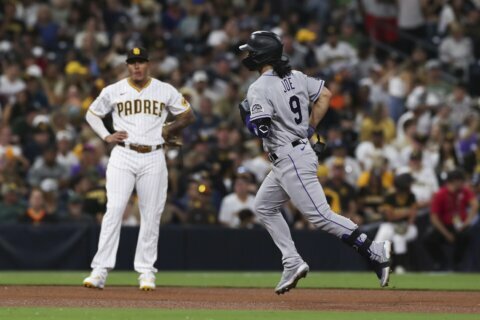