LOS ANGELES (AP) — Dodgers manager Dave Roberts got everything he had hoped for.

But Roberts’ joy after the win was tempered due to possible injuries to Max Muncy and Cody Bellinger.

Muncy, whose two-run shot in the first inning started the barrage, felt something in his right side tighten during the at-bat and left the game after homering. Bellinger was limping rounding first base after an RBI single in the fifth inning, and his night also ended early.

Roberts said he is hoping Muncy doesn’t have an issue with his oblique, while Bellinger’s issue could be a hamstring. Roberts said there will be additional testing and clarity on Saturday.

“We were starting to get healthy and feel good, but that’s baseball,” Roberts said. “We will hold out hope that it will be short term.”

“Our lineup is pretty tough to hit when we are pretty much at full strength,” said Kershaw, who struck out nine. “Hopefully Cody and Max are OK and we can keep that momentum going.”

Muncy, Justin Turner and Lux homered in the first inning to stake the Dodgers to a 6-0 lead.

Albert Pujols and Will Smith also went deep in the fourth inning as Los Angeles sent Texas to its 16th straight road loss.

Kershaw (8-5) returned to the form that has made him the longtime ace of the Dodgers staff. The left-hander, who had allowed five runs in each of his last two starts for the first time since 2011, gave up only one unearned and three hits with one walk.

Kershaw also was one of six Dodgers to have two hits, and his RBI single in the third extended their lead to 8-0.

“He was really good and wasn’t stressed at all. The fastball command and everything was good,” Roberts said of Kershaw.

After Mookie Betts led off by reaching base on an error, Muncy drove Mike Foltynewicz’s slider over the wall in right-center. Turner followed two pitches later with a drive to center, making the fourth time this season the Dodgers have had back-to-back homers.

Lux added a three-run homer with one out and marked the first time since 2015 that the Dodgers had connected three times in the opening frame. He also had an RBI double in the third.

Pujols, who replaced Muncy in the second inning, and Smith had solo shots in the fourth to make it 10-0. Los Angeles added two more in the fifth on Cody Bellinger’s RBI single and a sacrifice fly by Chris Taylor.

Foltynewicz (1-7) went 2 2/3 innings and tied a career-high with eight runs allowed (seven earned) on eight hits. The right-hander is the first Texas pitcher to allow three home runs in the first inning since A.J. Griffin in 2017 at Detroit.

“He lobbed too many down the middle. He has to do a better job. He’s a major league pitcher,” manager Chris Woodward said of Foltynewicz.

Woodward said he had a staff meeting before the game to discuss the losing streak, but his more immediate focus was on the short term.

“Tomorrow we have to go out and win a game,” he said. “It’s not rocket science. The more we talk about what we can’t do, the more we are losing focus about what we can do. I don’t care about the losing streak. I want to play a clean game.”

Kershaw had a four-strikeout inning for the first time in his career during the fourth inning. Adolis Garcia struck out on the 10th pitch of his at-bat, but got to first due to a wild pitch.

Dodgers: Roberts said it is a possibility SS Corey Seager could begin a rehab assignment in two weeks. Seager, who has been on the injured list since May 16 with a broken right hand, has started to take two-hand swings but with a tennis ball.

Dodgers RHP Trevor Bauer (6-4, 2.40 ERA) is sixth in the majors with 103 strikeouts and has allowed two or fewer earned runs in all but three of his 13 starts, He will be opposed by Texas LHP Kolby Allard (1-2, 3.41 ERA), who was born in Anaheim and has not previously faced the Dodgers. 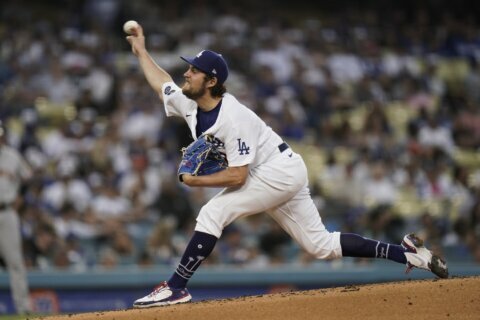