NEW YORK (AP) — James Kaprielian walked to the Yankee Stadium’s warning track, hours before finally pitching in the Bronx for the first time. He soaked in views of the ballpark he once envisioned as his future home.

“If I’m able to find that moment of silence and kind of that quiet moment and that peace, for me when I’m in those situations where the crowd’s roaring, I try and put myself back in that situation where I’m feeling silence,” Kaprielian later said.

Six years after New York took him in the first round of the amateur draft, Kaprielian beat the Yankees by pitching three-hit ball over 5 2/3 innings in a 5-3 victory Friday night that extended the Oakland Athletics’ winning streak to seven.

“I was excited to be here,” Kaprielian said. “For so long, I envisioned myself pitching on that mound and wearing a different uniform, but the fact that I got to be just here at all, it’s special. It feels good to come out here and get a win.”

Tony Kemp hit a three-run homer in the sixth on a hanging slider from Wandy Peralta (1-1), overcoming a 3-2 deficit with the first home run by a left-handed hitter this year off the southpaw reliever,

“Facing the team that traded me, at the end of the day this is a business. It is what it is, and I understand how this game works,” Kaprielian said. “I’m proud to be a part of this A’s team.”

Kaprielian made his major league debut last Aug. 16 and has been a rotation regular this season for AL West-leading Oakland, which improved to 13-2 over in June and 19-9 overall on the road this year. He struck out four of his first five batters, threw 44 four-seam fastballs that averaged 93 mph and mixed in 22 sliders, two curveballs and 12 changeups.

On the first night coronavirus attendance restrictions were lifted in the Bronx, Kaprielian (4-1) got to pitch before a crowd of 24,037 at Yankee Stadium and started by striking out four of his first five batters. He could be seen on television cameras celebrating Kemp’s homer in the dugout.

“We had been talking about it, he had been traded from the Yankees to us, and you always dream about pitching on that mound,” Kemp said.

He noted that because their names both start with K, the often get assigned hotel rooms near one another.

“So we always usually come to each other’s rooms and talk shop and talk baseball and he was just like, `I can’t wait for tomorrow,'” Kemp said. “And to be able to hit a home run right there to give him a W in Yankee Stadium, I think is something we both will always remember.”

With the A’s wearing kelly green jerseys for a rare road game, Kaprielian allowed three runs, struck out seven and walked one.

“I thought he was tough,” Yankees manager Aaron Boone said. “We didn’t mount a whole lot against him.”

New York had won three straight games when trailing after six innings but fell short in doing it for the fourth game in a row, something the team did last as the Highlanders from May 17-20, 1910, according to STATS.

Yusmeiro Petit allowed one hit in 1 1/3 innings, Jake Diekman pitched a hitless eighth and Lou Trevino completed the four-hitter for his 12th save in 14 chances.

Matt Olson hit his 19th homer in the first and Mark Canha added an RBI single in the third off Jameson Taillon, who allowed two runs and four hits in 4 2/3 innings and is 0-2 in his last eight starts. He has one win in 13 starts with the Yankees.

DJ LeMahieu’s two-run homer in the third and Rougned Odor’s solo drive in the fifth put the Yankees ahead.

“It felt like more energy. The bleachers were definitely getting after it tonight,” LeMahieu said of New York’s largest crowd since Game 5 of the 2019 AL Championship Series. “It was more noticeable. It was great to have everyone back.”

Peralta allowed singles to Matt Chapman and Sean Murphy and was one strike from ending the inning when Kemp hit his third homer this season.

NO HOME RUN DERBY FOR JUDGE

Aaron Judge won the 2017 home run derby as a rookie, when he hit 52 homers and broke Mark McGwire’s rookie record. He did not participate in the event in 2018 and 2019 and he has one stipulation for future participation.

“I’ve got no interest right now unless the All-Star game is back in New York soon,” Judge said.

The Yankees last hosted the All-Star game in 2008, the final season in old Yankee Stadium. It last was held in New York at Citi Field in 2013.

Yankees: 1B Luke Voit (strained oblique) was 3 for 3 with a solo homer and two-run double for Double-A Somerset in his fourth rehab game 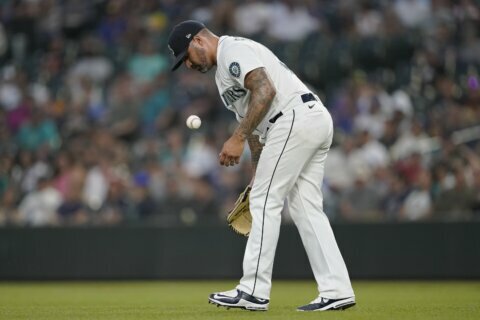 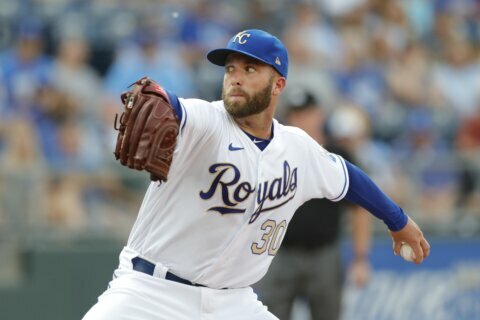 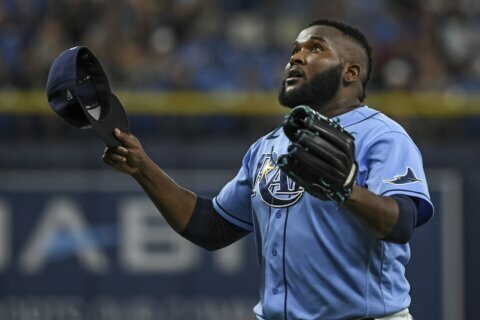