MINNEAPOLIS (AP) — Michael Brantley had his second four-hit game of the series and drove in four runs, part of a 20-hit attack that helped the Houston Astros rout Minnesota 14-3 Sunday to take two of three from the Twins.

Minnesota’s Michael Pineda (3-4) left after four innings due to a reoccurrence of right forearm soreness that first bothered him June 1. In his second start since returning, he allowed three runs and six hits — raising his totals to 10 runs over 11 1/3 innings in his last three starts.

Kyle Tucker homered for the second straight game and had three hits for the Astros, who also swept the Twins in last year’s wild-card playoff round. Yordan Álvarez and Chas McCormick homered.

“This is a team that I feel like for a few years has been accustomed to winning, so I don’t think it’s a big surprise on any given day,” Álvarez said. “Every single guy on the team is capable of doing a lot of good things, and that’s what we were able to do today.”

Houston went 7 for 21 with runners in scoring position and won its fourth straight series, completing a 6-3 trip that included games against Boston and Toronto.

“I’m happy,” Astros manager Dusty Baker said. “When you leave home on a 10-day road trip, you really don’t know what to expect. You hope that you do well and come home at least .500. We won every series, which was really big.”

Minnesota has lost four of its last six games. Ryan Jeffers and Nelson Cruz homered for the Twins.

“We have to play better,” Jeffers said. “We still have a lot of games remaining and we’re going to have to prove to everyone, including ourselves, that we’re capable of sustaining the good play that we show at times.”

Brantley had missed 12 games with right hamstring soreness and reached base in 15 of 23 plate appearances over five games since returning. He went 8 for 11 in the series with three doubles and two walks.

“He can hit and he works on it,” Baker said. “He knows he can hit. He’s tension-free. If you’re going to teach a kid how to hit, tell him to watch Michael Brantley.”

Alex Bregman’s first-inning sacrifice fly put Houston ahead to stay. Tucker homered for a 2-0 lead in the fourth, and Yuli Gurriel’s sacrifice fly and Carlos Correa’s RBI double made it 4-0 in the fifth.

Valdéz has allowed four earned runs in four starts since coming off the injured list. Valdéz missed the first 49 games of the season with a fractured left ring finger.

Pineda could be headed to the injured list. Pineda has told manager Rocco Baldelli he can pitch with the soreness, but Baldelli believes rest is needed to recover.

“I think rest is something and the main thing that he needs right now,” Baldelli said. “How long that’s going to be, I’m not sure. This isn’t an injury, per se. This is muscle soreness that he’s having a tough time getting rid of. Something that rest is probably going to help.”

Astros: C Jason Castro caught five innings on Friday during a rehab assignment with Triple-A Sugar Land, took Saturday off and played seven innings Sunday night, going 0 for 1 with a strikeout and two walks at the plate. … C Martín Maldonado was out of Sunday’s lineup in order to give him two days off. Baker said he’s dealing with tight hamstrings.

Twins: OF Max Kepler (left hamstring strain) started a rehab assignment with Triple-A St. Paul as the designated hitter on Sunday and was hitless in his first four at-bats. … OF Byron Buxton (right hip strain) and IF/OF Luis Arraez (right shoulder strain) didn’t play in rehab games on Sunday, instead taking a day to recover. Baldelli said the two will join the team on the trip to Seattle.

Astros: RHP Lance McCullers Jr. (3-1, 2.96 ERA) will return from the injured list to start the series opener at home on Tuesday against Texas. McCullers has been out since May 22 with right shoulder soreness. Baker said that Jake Odorizzi will piggyback with McCullers, and the team will then move to a six-man rotation. RHP Kyle Gibson (4-0, 2.13) is scheduled to start for the Rangers.

Twins: RHP Kenta Maeda (2-2, 5.27) will make his return from the injured list on Monday for Minnesota as he starts at Seattle. Maeda had a right adductor strain and general right arm soreness and last pitched on May 22. The Mariners are scheduled to start LHP Marco Gonzales (1-4, 5.45). 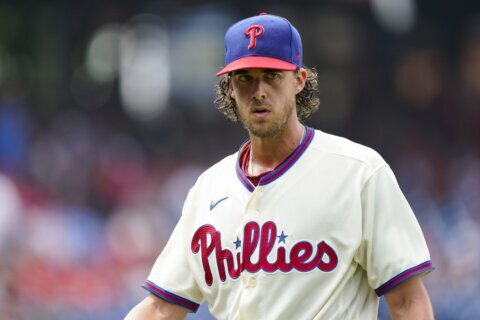 Yankees’ Germán has no-hitter broken up in 8th at Fenway