OAKLAND, Calif. (AP) — Oakland’s slugging Matts have a running joke how one is usually hot when the other’s not.

Lately, both are driving the ball — and they combined for three home runs Sunday.

Olson hit solo shots in the third and fifth for his second two-homer game this season and 10th of his career. Chapman homered in the first to back Bassitt (7-2).

“We actually joke about it a pretty good bit that when one’s hitting the other one never does,” Olson said. “It’s nice to get a few games where we’re both doing stuff. We honestly don’t actually put weight into that but it seems like it sometimes. It’s definitely good to sync up a little bit.”

Bassitt had a scare in the second when Nicky Lopez’s screaming liner glanced off his back side for an RBI single. The pitcher, clearly shaken, went face down in the grass with his arms spread for several moments as athletic trainer Nick Paparesta and manager Bob Melvin scurried to check on him, but Bassitt stayed in the game.

“It hit me in the perfect spot. That may sound weird,” Bassitt said. “It didn’t affect me at all.”

The hit by Lopez loaded the bases, but Bassitt regrouped and got Whit Merrifield on a called third strike to escape further damage.

Bassitt allowed two earned runs on five hits with five strikeouts, three walks — one intentional — and two hit batters over 5 2/3 innings. He is unbeaten since losing his initial two starts on April 1 and 6.

Just when the A’s finally got a day devoid of wind during an especially blustery June stretch for the Bay Area, Chapman’s home run ball left the bat at 103.1 mph and traveled 384 feet. Then Olson cleared the fences twice.

Bubic had five more strikeouts over 4 2/3 innings to give him has 27 in 30 innings as a starter.

Carlos Santana homered in the seventh for Kansas City, which still missed timely hits with runners on base.

“Just one of those that the big hit kind of alluded us,” manager Mike Matheny said. “We had a couple guys come up big but nobody on.”

Lou Trivino, Oakland’s third reliever, finished for his 10th save and hasn’t surrendered a run in June.

After a four-hit performance Saturday, Olson added two more hits, took his team-leading home run total to 18 and wound up 7 for 15 in the four-game series.

The A’s have won 13 of the last 18 meetings with Kansas City, which has an off day coming Thursday to end a stretch of 14 games in as many days.

Royals: Kansas City hopes to have SS Adalberto Mondesi back from the injured list for a strained left hamstring early in the week when the team returns home.

Athletics: CF Ramón Laureano, working back from a strained right hip that landed him on the IL, will hit Monday against live pitching in a simulated game against J.B. Wendelken — sidelined by a strained left oblique. Then Laureano is scheduled to run bases Tuesday. He may not need a rehab assignment in the minors if all goes well. “If we feel like we get enough at-bats for him off of J.B. and then he runs the bases well on Tuesday, it could be as easy as just activating him on Wednesday,” Melvin said. “A lot of it will revolve around how he feels when he gets his at-bats against J.B.” … Leadoff man Canha returned to the lineup following a day off to rest.

LHP Sean Manaea (5-2, 3.09 ERA) takes the ball for the A’s in their series opener with the Angels on Monday having not allowed a run over his last two outings and 15 innings.

The Royals return to Kansas City to begin a six-game homestand with RHP Brad Keller (6-5, 5.75) making his team-high 14th start. 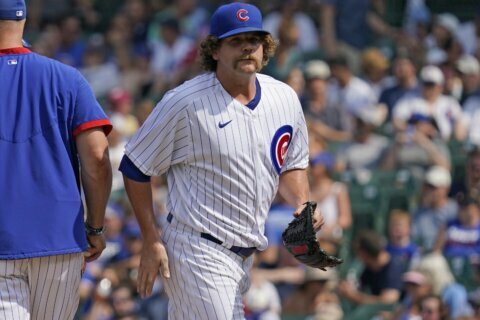 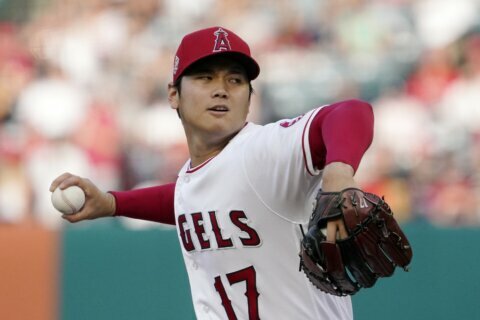