About the only thing louder? Maybe the ball coming off Giancarlo Stanton’s bat.

Boos and bad words streamed from the seats in the Astros’ return to the Bronx, and Stanton had a homer and four hits to help New York sate those spiteful fans in a 7-3 victory Tuesday night.

In Houston’s first visit to New York since the Astros’ sign-stealing scam was exposed, an error by third baseman Alex Bregman in the sixth inning let New York blow the game open.

“That was intense,” Stanton said. “I wouldn’t want to be on the other side of that. They brought something heavy.”

“That was playoff energy, even though we’re not at full capacity,” Stanton said. “That was fun. They brought the noise.”

Bregman momentarily hush those haters when he homered in the first inning off Domingo Germán, but Bregman’s miscue in the sixth with the game tied 3-3 doomed Houston.

He barehanded DJ LeMahieu’s bases-loaded slow roller but skipped his throw past first baseman Yuli Gurriel. Three runs scored on the play, the last Rougned Odor, whose left knee slammed into catcher Martín Maldonado’s head as he reached the plate. Odor appeared to be trying to avoid LeMahieu’s bat, which was lying in the right-handed batter’s box.

LeMahieu was credited with a single and an RBI, and one of the runs was unearned. Stanton made it 7-3 when he scored LeMahieu with a single.

“Looking back now, I probably should’ve ate it,” Bregman said.

New York players and coaches downplayed any lingering bitterness toward Houston ahead of this series, but their supporters had no such filter.

A Major League Baseball investigation confirmed the Astros stole signs en route to a 2017 World Series title — they beat New York in a seven-game AL Championship Series on the way. Manager A.J. Hinch and general manager Jeff Luhnow were fired in the fallout. Hinch, now managing the Tigers, heard a few boos in his return to Yankee Stadium over the weekend.

Astros players, though, were granted immunity during the probe — a decision that peeved players and fans alike when it was handed down in January 2020.

Before the game, vendors outside the stadium sold merchandise mocking the Astros, including profane shirts and foam fingers — one digit raised, not the pointer. Fans gathered near the visiting dugout to boo Houston during batting practice, the harshest jeers saved for Altuve, who edged Yankees star Aaron Judge for AL MVP in 2017.

Germán egged on the fans with arm gestures when he walked out to the bullpen.

“The energy that was created, we haven’t seen that since 2019,” Yankees manager Aaron Boone said.

The vitriol intensified when Houston’s lineup was introduced, focused on the four lineup regulars remaining from 2017 — Altuve, Bregman, Gurriel and Carlos Correa.

Altuve was met by deafening boos when he led off the first. They persisted throughout the inning — pausing only for a beat after Bregman hit a two-out, solo homer. Fans were chanting a profane insult at Bregman when he connected.

Bregman mostly held his emotions as he rounded the bases but let out a primal scream in the dugout.

“I think we just tried to focus on taking good swings, competing and worrying about baseball,” Bregman said.

The Yankees counterpunched in the bottom of the first, getting three runs during a 31-pitch inning by Zack Greinke. Stanton hit a towering two-run homer off a 71.7 mph curve — the slowest pitch he’s homered against in his career — as the first five New York batters reached.

Stanton added a 117.4 mph double in the fifth and had singles in the sixth and eighth innings, stretching his hitting streak to 10 games. He drove in three and lifted his average to .297 as the Yankees extended a winning streak to four for the first time this year.

Greinke was pulled after allowing three runs, three hits and four walks in four innings. It was his first game with four free passes since Game 4 of the 2019 ALCS at Yankee Stadium. He struck out four.

Michael Brantley also homered for Houston, and Gurriel hit an RBI double that bounced off the top of the left-field wall.

Altuve was 0 for 4, extending his slump to 1 for 25. Correa was also 0 for 4, making the game’s final out with a drive to left-center caught on the warning track.

Odor and Maldonado were helped off the field by trainers after their collision at home plate. Odor struggled to put weight on his left leg. Both were removed from the game.

The Yankees said Odor would get an MRI on his left knee Tuesday night.

Houston said Maldonado has a trapezius contusion and no concussion symptoms. He’s day to day.

Astros: LHP Framber Valdez (broken left finger) is well ahead of schedule in his recovery and has resumed throwing off a mound. Baker said he’ll need reps akin to a full spring training to get his arm back in shape. The club doesn’t have an expected return date yet.

Yankees: 1B Luke Voit (left knee surgery) was 2 for 3 with a double as he began a rehab assignment with Triple-A Scranton/Wilkes-Barre. Boone expects him to play five or six games there before hopefully joining the big league team next week. 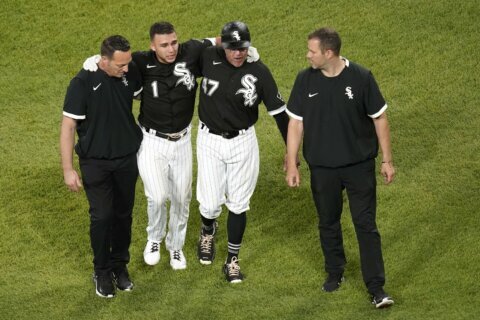 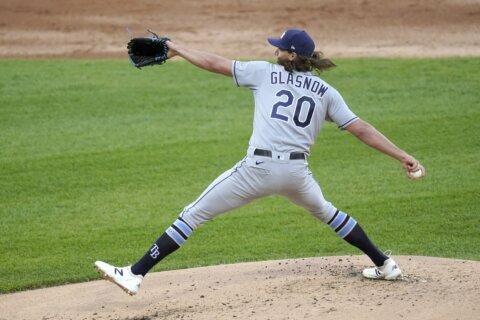