LEADING OFF: Ohtani rerouted to Friday, Thor out 6 weeks

Shohei Ohtani is set to pitch for the Angels in Oakland — assuming he can get to the ballpark on time.

Los Angeles’ two-way star was supposed to take the ball Thursday, but manager Joe Maddon scratched the right-hander after an accident on the Bay Bridge snarled traffic. The team bus carrying Ohtani wasn’t able to get through, and Ohtani experienced another delay when he tried to take a Bay Area Rapid Transit train.

Ohtani didn’t get to the Coliseum until around 5 p.m. ahead of a 6:40 p.m. first pitch — not enough time for his roughly three-hour pre-start routine — so Maddon tabbed Patrick Sandoval to start and pushed Ohtani back to Friday. Ohtani stayed in the lineup as the designated hitter.

The Japanese sensation entered Thursday hitting .270 with 15 homers and is 1-0 with a 2.37 ERA over six starts.

The Mets may need to reassess their rotation after learning Thursday that right-hander Noah Syndergaard won’t throw for at least six weeks due to inflammation in his right elbow.

The hard-throwing 28-year-old was nearing a return from Tommy John surgery when he left his second minor league rehab start Tuesday after just one inning. The Mets said an MRI showed no structural damage to his UCL. Manager Luis Rojas said “we pray that he can pitch for us this year.”

Syndergaard is one of several Mets on the injured list and one of four pitchers along with Carlos Carrasco (right hamstring), Taijuan Walker (right side) and Jordan Yamamoto (right shoulder). Carrasco, expected to serve as the Mets’ No. 2 pitcher in Syndergaard’s absence, is on the 60-day IL and not expected to return until at least July.

Despite the injuries, New York’s starters entered Thursday with a combined 2.94 ERA, fifth best in the majors.

Walker is set to pitch Friday against Atlanta.

Framber Valdez is set to make his first start of 2021 for Houston after breaking his left ring finger during spring training. Houston initially feared the 27-year-old left-hander could miss nearly the entire season, but his injury healed surprisingly fast.

Valdez made two minor league rehab starts, most recently throwing 54 pitches in four innings for Triple-A Sugar Land on Saturday. He was a breakout star with the Astros in 2020, going 5-3 with a 3.57 ERA, then had a 1.88 ERA in four games (three starts) during the postseason.

The Yankees hope to get closer Aroldis Chapman back from a non-coronavirus illness that has sidelined him for two days. They’re also expecting to activate slugger Giancarlo Stanton, who has been on the injured list with a quadriceps injury.

The Brewers are set to open a three-game series in Washington, their first visit to Nationals Park since a crushing defeat in the 2019 NL wild-card game. Milwaukee led the game 3-1 before right fielder Trent Grisham misplayed Juan Soto’s bases-loaded single in the bottom of the eighth, enabling Washington to go ahead 4-3.

The Nats locked up the victory and went on to win the World Series, while Milwaukee traded Grisham to San Diego that winter. He won an NL Gold Glove in 2020 in center field. 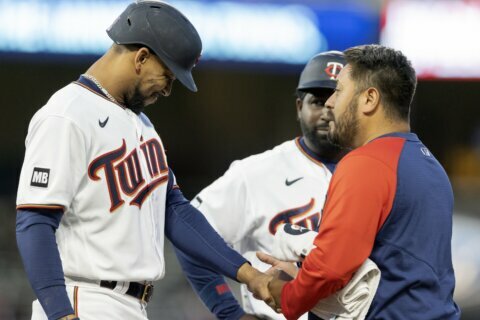 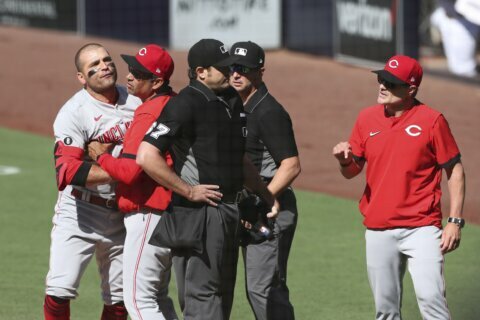