Tauchman hit a three-run shot in the third off Joe Musgrove to help the Giants remain atop the NL West.

“I knew I hit it good, but you never know. A situation like that you just try and put a good swing on the ball,” Tauchman said. “Gausman did a great job this afternoon throwing a lot of strikes and making hitters uncomfortable.”

Gausman (2-0) kept the Padres off balance, giving up six hits and striking out six. He also reached base on a single and an error to help the offense.

“You are always trying not to get swept. If you can stay away from those sweeps, especially against good teams, it can kind of kill some of their momentum,” Gausman said. “It is definitely good to get one out of here.”

Musgrove (2-3), who pitched the first no-hitter in Padres history for his hometown team April 9 at Texas, came into the game with a 1.24 ERA and .137 opponents’ batting average (both ranked second in the NL). But he was not sharp against the Giants.

“Tauchman had a great approach against Musgrove. I thought our entire group had a great approach against Musgrove. We were just going to be very selective and see if we could run up his pitch count,” Giants manager Gabe Kapler said. “The big hit for us (Tauchman’s homer) was huge given the fact that we had gone a couple of days of not hitting with runners in scoring position.”

“A little bit of searching out there. I fell behind to a couple of hitters and a couple of walks hurt me,” Musgrove said. “I just didn’t have great stuff most of the day.”

Musgrove also made a costly fielding error on a sacrifice bunt attempt by Gausman in the third that led to an unearned run in the Giants’ four-run outburst. Musgrove gave up two additional runs in the fifth.

“It wasn’t a very good bunt on my part, to be honest,” Gausman said. “I automatically thought, just don’t be on the back end of a double play.”

San Francisco tacked on a run in the ninth for a 7-1 lead as Padres reliever Aaron Northcraft walked four batters, including Tauchman with the bases loaded.

Tatis hit an opposite-field homer to right off Gausman to give San Diego a short-lived 1-0 lead.

There were two outstanding catches in the outfield, one by each team.

In the first inning, Tauchman hit a deep fly to right-center where Padres right fielder Jurickson Profar ranged far to his right and made a spectacular diving grab near the base of the wall.

In the fourth, Giants left fielder Alex Dickerson robbed Jake Cronenworth of a hit with a charging, diving catch.

“I tip my cap to our defense. They probably saved me two or three runs today,” Musgrove said.

Giants: RHP Reyes Moronta experienced forearm tightness while warming up in the bullpen Saturday and was due to be seen by a doctor Sunday, Kapler said. … SS Brandon Crawford (calf) was feeling better and was to be evaluated to see if he could play defense or pinch-hit. … 2B Tommy La Stella appeared to shaken up after diving for a ball in the third inning and was visited by the athletic trainer. After he tripled and scored in the fifth, La Stella was removed. Kapler said La Stella has a left hamstring strain and an update on his condition will be provided Monday.

Giants: RHP Aaron Sanchez (1-1, 2.22 ERA) takes the mound in the opener of a three-game series at Colorado on Monday.

Padres: RHP Miguel Diaz is scheduled to make his season debut Monday night in the opener of a three-game home series against the Pittsburgh Pirates. 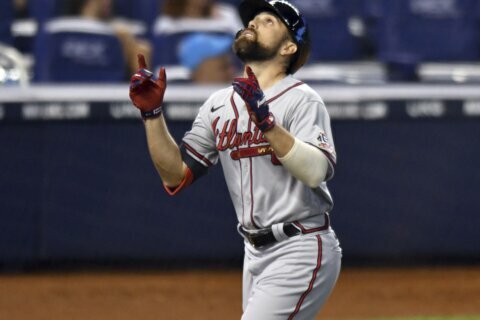 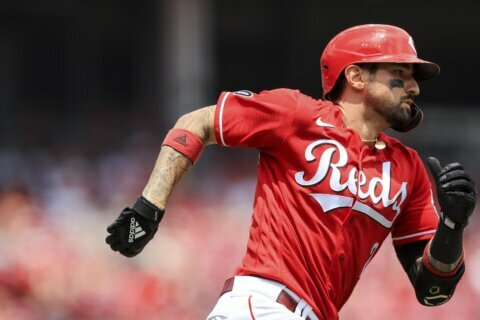