With their bullpen depleted, the Marlins were one strike from a second consecutive extra-inning game when Cooper hit a two-run homer to beat the New York Mets 3-1.

Cooper’s homer came with two out in the ninth on a 3-2 pitch from Drew Smith (1-1), giving the Marlins a bounce-back victory after they used 10 pitchers in a 12-inning loss to the Mets on Friday.

Mets center fielder Johneshwy Fargas made a leaping snow-cone catch to rob Jesús Aguilar of an extra-base hit to start the ninth. Brian Anderson singled with two outs, and Cooper homered on a 90-mph cutter down the middle.

The Mets’ Dominic Smith tied the game at 1 with a two-out, RBI single in the eighth. Richard Bleier thought he had Smith struck out with the previous pitch and took several steps toward the dugout assuming the inning was over.

Anderson scored the Marlins’ first run from third on a sacrifice fly in the seventh when catcher Tomás Nido dropped the ball making the tag.

Miami’s Pablo López allowed four hits in seven scoreless innings and struck out eight. He knew the team needed for him to go deep into the game.

“Today more than usual, that was my main focus — I wanted to be efficient and effective early, and get myself in good counts,” López said.

López has only one victory, but has held opponents to one run or less in six of his 10 starts and has an ERA of 2.73.

Yimi García (3-2) pitched around a leadoff walk to work a scoreless ninth. The injury-plagued Mets totaled five hits and have 13 in 21 innings in the series.

“We couldn’t get any momentum,” manager Luis Rojas said. “We didn’t get a ball over the fence today. We’re that kind of team right now. We’re fast; we’ve got to create things.”

The Marlins have split the first two games of the series even though they’re 3 for 20 with runners in scoring position. They closed to within three games of the NL East leaders.

“A big game,” Mattingly said. “When you’re playing the team you’re chasing in a tight division, it’s a two-game swing.”

Miami was flummoxed by Mets starter Joey Lucchesi, who came into the game with an ERA of 9.19. He struck out eight and allowed only one hit in four innings, lowering his ERA to 7.32.

“My mindset was different today. I tried to keep it simple,” Lucchesi said. “I can definitely build off this.”

Cooper totaled three hits, and his average has risen to .242 from .177 on May 2. He homered for the third game in a row, increasing his season total to five.

“I was pretty frustrated with myself early in the year,” he said. “You ride the lows and ride the highs, and try to stay as even keel as possible.”

The walk-off homer was Cooper’s first, and the first for the Marlins since Harold Ramirez hit one August 29, 2019 against Cincinnati.

Mets: INF Jake Hager was designated for assignment less than 24 hours after getting his first major league hit. RHP Jordan Yamamoto was recalled from Triple-A Syracuse, and LHP Stephen Tarpley was reinstated from the minor league injured list.

Mets: OF Brandon Nimmo (finger nerve), who hasn’t played since May 2 and had a setback in his rehabilitation, said he expects to start swinging a bat soon.

Marlins: RHP Jordan Holloway (right groin strain) went on the 10-day injured list. RHP Elieser Hernandez (biceps) was transferred to the 60-day injured list but is on track to be activated after two more rehab outings.

Marlins RHP Cody Poteet (1-0, 1.80) is scheduled to make his third career start in the series finale Sunday. The Mets’ starter hadn’t been announced. 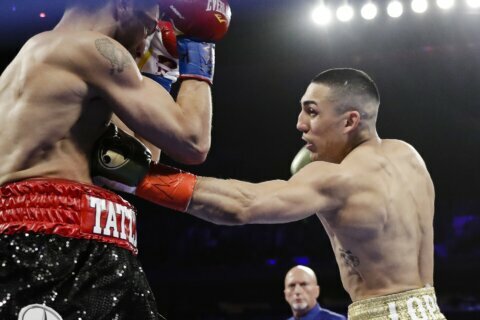