It was the Mariners’ first hit in 16 innings at home. The club was no-hit by Baltimore’s John Means in its previous home game May 5.

Plesac wasn’t overpowering, but he induced weak contact when Seattle put the ball in play.

The 26-year-old right-hander had two strikeouts and three walks on 78 pitches entering the eighth. Only five of the 21 outs to that point had been made by outfielders, including Josh Naylor’s grab in foul territory while crashing into the stands on the first pitch of the game to Seattle’s Jarred Kelenic.

Plesac, the nephew of longtime big league pitcher Dan Plesac, was 2-3 with a 3.83 ERA entering Thursday.

Before his no-hitter, Plesac may have been best known for a misstep last season, when he broke COVID-19 protocols and was disciplined by the Indians.

Plesac and former teammate Mike Clevinger left the team’s hotel following a start by the right-hander in Chicago. The Indians ended up placing both pitchers on the restricted list and sending them to their alternate site.

Cleveland has the longest no-hitter drought in the majors — its last one was Len Barker’s perfect game in 1981.

There have been four no-hitters already this season, and Seattle and Cleveland have been involved in three of them.

The Indians have been no-hit twice — by Chicago White Sox left-hander Carlos Rodón on April 14 and by Cincinnati lefty Wade Miley a week ago. Plesac started both of those games. 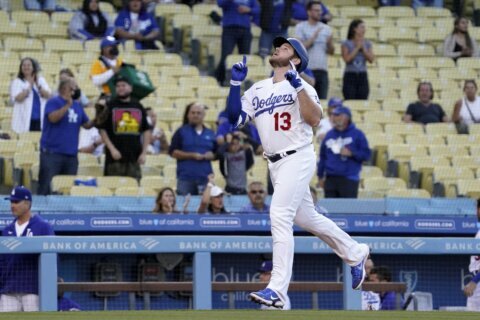