DETROIT (AP) — A.J. Hinch’s first month as Detroit’s manager was rough. Now he has reason to hope the worst is behind him.

Harold Castro hit an RBI single in the bottom of the 10th inning off Craig Kimbrel to give the Tigers a 9-8 victory over the Chicago Cubs on Saturday. Detroit rallied from deficits of 2-0, 4-3, 7-6 and 8-7 to win a back-and-forth game in which neither starting pitcher made it past the third. It was the fifth win in six games for the Tigers, who were 9-24 before this upswing.

“There’s no quit in this team, which I’ve appreciated. We have had a rough stretch,” Hinch said. “Our guys will stay in and compete. I applaud their effort, and quite honestly we expect it at this level.”

The final comeback by the Tigers on Saturday came when they scored twice off Kimbrel (0-2) in the 10th.

Nomar Mazara tied it with an RBI single that scored the automatic runner, and JaCoby Jones ran for Mazara and stole second. Then Castro — hitless in five previous at-bats Saturday with three strikeouts — slapped a two-out single to left. The throw home by Kris Bryant was a bit off line and Jones was easily safe.

“It was a tough day. … I’ve got be prepared, every at-bat,” Castro said. “I’ve got to be prepared for any situation in the game, and that’s what I did.”

Matt Duffy homered and drove in five runs for the Cubs. His RBI single off Michael Fulmer (3-2) gave the Cubs the lead in the top of the 10th.

The Cubs snapped a streak of seven straight one-run games when they beat Detroit 4-2 on Friday night. Then they played another close one Saturday.

Joc Pederson led off the game with a triple and eventually scored on Anthony Rizzo’s two-run double. Detroit answered with three runs in the bottom of the first. Mazara hit an RBI double, Jonathan Schoop followed with a run-scoring single, and the Tigers went ahead 3-2 when Castro grounded into a fielder’s choice.

Detroit starter José Ureña was hit around the right foot by Jason Heyward’s liner in the second. He made it through that inning but then gave up two runs in the third. Rizzo brought home a run with a groundout and Duffy added an RBI double to give the Cubs the lead and chase Ureña.

Chicago starter Trevor Williams lasted only two innings. Alec Mills pitched a scoreless third, but the Tigers re-took the lead an inning later after loading the bases with nobody out. Mills threw a wild pitch, enabling Detroit to tie it at 4. Miguel Cabrera brought home another run with a one-out grounder, and Schoop made it 6-4 with an RBI double.

Duffy gave the Cubs the lead again with a three-run homer in the fifth, his first home run of the season and second since the start of 2019.

“I don’t do that very often, so I’m just going to smile and enjoy it,” he said of his post-homer reaction.

Cabrera tied the game at 7 with a bases-loaded single in the seventh.

Keegan Thompson pitched a scoreless eighth and ninth for the Cubs, striking out five and keeping the score tied at 7. The 26-year-old rookie has not allowed an earned run, and Chicago was willing to use him in a key situation.

Tigers: 3B Jeimer Candelario left the game after being hit on the left knee by a pitch in the sixth. The team described the injury as a contusion. … Hinch said the Tigers are aiming to have C Wilson Ramos (lumbar spine strain) return Monday, barring a setback. … Hinch said RHP Erasmo Ramírez (right pectoralis strain) hasn’t started a throwing program yet and is not close to returning.

The Tigers wrap up the series by sending Matthew Boyd (2-3) to the mound against Chicago’s Kyle Hendricks (2-4) on Sunday. Boyd worked six scoreless innings against Kansas City on Tuesday. 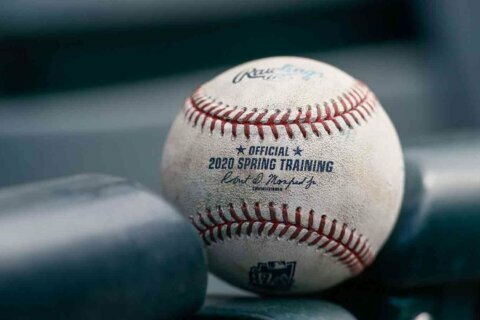 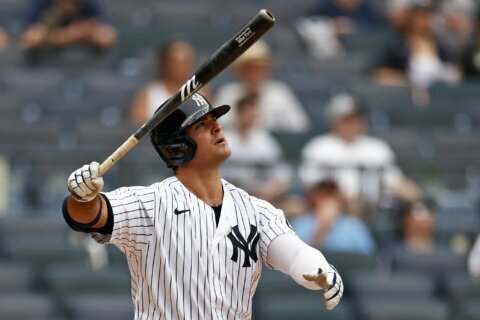