BOSTON (AP) — Red Sox manager Alex Cora has been searching for contributions from the rest of his lineup with Boston’s biggest bats struggling to produce during a sudden scoring slump.

He got that and a lot more to finally slow down the red-hot Athletics.

Xander Bogaerts and Bobby Dalbec each hit a two-run home run, and Boston avoided a sweep with an 8-1 win over Oakland on Thursday night.

The Red Sox jumped on A’s left-hander Sean Manaea, pounding out 10 hits and seven runs in the first three innings on the way to snapping a three-game skid. Boston finished with 13 hits on the night.

“It was good to see them that on and give (starter Garrett Richards) margin for error,” Cora said. “We were able to do a lot of things today.”

Richards (3-2) took advantage of the early support and allowed no runs and five hits, striking out four over six innings. He’s won three of his last four starts. Garrett Whitlock gave up one run over three innings to get his first career save.

Richards credited pitching coach Dave Bush for helping him get back on track this season after struggling through a rash of injuries during multiple stops over the past five years.

“We’ve been able to sit down and kind of figure out what’s going to make me get back in the strike zone and make my stuff play in the zone,” Richards said. “We feel like I’m in a good place right now.”

Bogaerts had three hits after going 1 for 12 in his previous four games.

Boston’s offensive onslaught came after it totaled just three runs in the first two games of the series.

Manaea (3-2) took the loss after failing to get an out in the third inning and getting pulled.

“They were just aggressive early in the count, whether it was his fastball or not,” A’s manager Bob Melvin said. “Probably just didn’t locate (his pitches) the way we’ve seen him locate here.”

Michael Chavis led off the game by hitting a sharp line drive into shallow center field. Ramón Laureano made a diving attempt to snare it, but it popped out of his glove. Chavis took advantage, hustling in for a double.

Alex Verdugo lined out, but J.D. Martinez brought Chavis in with a single to center. Bogaerts then cleared the bases, jumping on a first-pitch, 91 mph sinker from Manaea and roping a hard shot down the left-field line for his eighth homer of the season.

Dalbec increased the lead to 5-0 with his two-run blast to straightaway center the following inning.

“I think we actually set the tone on both ends today, which is a dangerous thing for a team to be able to do,” Chavis said.

Athletics: Melvin said the team is close to reaching 85% vaccination for their Tier 1 personnel. He estimated they were at around 80%. … INF Chad Pinder, who has been on the injured list for 34 games with a sprained left knee, will likely rejoin the team during its three-game road trip in Minnesota, Melvin said

Red Sox: RHP Nick Pivetta was reinstated from the COVID-19 injured list Thursday after experiencing side effects from his recent vaccination. He will start Boston’s series opener against the Angels.

Trailing 8-0, Oakland’s Sean Murphy was on first with two out in the seventh when Mark Canha doubled off the right-field fence. But Jonathan Araúz took the relay throw from right fielder Hunter Renfroe and fired a strike to catcher Christian Vázquez, who tagged out Murphy at the plate.

Red Sox: Pivetta (5-0, 3.19) last started May 9 in Baltimore, limiting the Orioles to two runs over six innings in the Red Sox’ 4-3 win. He has gone at least five innings in six of his seven starts this season. 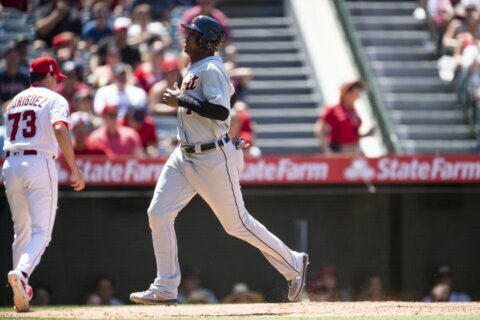