Ohtani walked Lowrie on four pitches leading off the seventh and then walked Mitch Moreland. Chapman followed with a soft single to left that Upton struggled to pick up, allowing Lowrie to score easily. Seth Brown added an RBI single.

Elvis Andrus had two hits to help the A’s to their third straight win.

“When you play late in the season, you’re not always going to be able to just go out there and outslug people. You have to find other ways to win games,” Chapman said. “You look at teams like the Astros and Dodgers, they have a bunch of different ways they can beat you.

“If we can take a little bit of that, then we’re going to have multiple ways to win. The pitching and defense always seems to be there.”

Ohtani (1-1) was scratched from his scheduled start Thursday after getting stuck in a traffic jam coming from San Francisco that delayed his arrival to the Oakland Coliseum.

Although Ohtani didn’t seem bothered by getting pushed back a day — “I think he slept here last night,” Angels manager Joe Maddon joked before the game — the A’s eventually wore him down.

Ohtani allowed three earned runs and three hits but had control problems late. He walked four and hit Mark Canha with a pitch in the back three innings after a similar fastball that just missed Canha had players from both teams streaming onto the field.

“I definitely felt a lot more comfortable throwing this time,” Ohtani said through a translator. “With all things considered, with my start being skipped yesterday, I felt really good.”

David Fletcher had an RBI single in the seventh, ending the Angels’ 18-inning scoreless funk.

The win was Melvin’s 708th as A’s manager, tying him with current White Sox skipper Tony La Russa for most in Oakland history. Connie Mack owns the franchise record with 3,582 victories.

“I’ve had bosses who’ve had faith in me and I’ve had really good players,” Melvin said. “I’m just kind of a glorified cheerleader who pats them on the back and gets credit occasionally.”

Yusmeiro Petit (7-0) retired four batters to win. Lou Trivino pitched the ninth for his seventh save.

Tempers flared briefly between the AL West rivals in the third inning after Canha took exception to a 93.3 mph fastball from Ohtani that was up and in. Canha yelled in Ohtani’s direction, prompting catcher Kurt Suzuki to get in his face.

Home plate umpire Larry Vanover stepped between the two as players from both dugouts and bullpens slowly streamed onto the field. When the at-bat resumed, Ohtani fanned Canha as Suzuki threw out Andrus trying to steal second to complete a double play.

Ohtani and Canha nodded to each other after Canha reached first base following the hit-by-pitch in the sixth.

“He’s a good hitter and against good hitters I need to make my pitches in,” Ohtani said. “It was nothing on purpose.”

Lowrie ranged far to his right behind the bag on the outfield grass to snag a sharp grounder in the third up the middle by Juan Lagares, then made an off-balance throw to first baseman Matt Olson.

Angels: SS José Iglesias was placed on the injured list but took batting practice before the game. Iglesias left Tuesday’s game against Texas with a left hamstring strain.

Athletics: CF Ramon Laureano was held out because of right groin tightness. … A.J. Puk was reinstated from the injured list and optioned to Triple-A Las Vegas. The lefty will initially work out of the bullpen on his way back from a strained left biceps injury. … LHP Reymin Guduan was placed on the 10-day IL because of a strained right groin. Jordan Weems was recalled from Las Vegas. 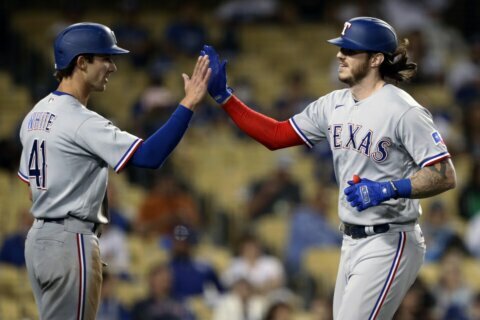