Albies hit home runs from both sides of the plate and Ronald Acuña Jr. led off with his major league-best 15th homer as the Braves again showed off their power game and beat the Pittsburgh Pirates 6-1 on Saturday.

The Braves’ three homers on Saturday followed a seven-homer attack, including blasts by Albies and Acuña, in a 20-1 rout of the Pirates on Friday night.

“It’s started clicking,” Albies said. “It looks better and feels better and for the team it’s huge, a different type game that we’re playing. We hope to keep it going.”

After Acuña hit one of Atlanta’s two grand slams on Friday night, he didn’t wait to keep the offense rolling. With fans in the sellout crowd of 40,068 still arriving, Acuña pulled Mitch Keller’s first-pitch fastball over the left-field wall.

“Special,” Albies said of Acuña. “It’s him. He tells you he’s going deep. (Keller) throws the first pitch in the zone and he does it.”

Acuña hustled out of the box as there was no certainty the line drive was going to clear the fence. He slowed down for the rest of his home-run trot.

It was his 22nd career leadoff shot, extending his franchise record, including three this season.

The Braves lead the major leagues with 75 homers. At times, the all-or-nothing approach hasn’t worked, but Atlanta’s batters have connected in consecutive win over the Pirates.

Albies added a two-run shot in the fifth as a left-handed hitter. He hit another homer, his ninth, from the right side off Sam Howard in the seventh. It marked the 14th time in Braves history a player homered from both sides of the plate, including twice by Albies.

Bryse Wilson (2-2) allowed one run on five hits in 6 2/3 innings, the longest start of his career.

Michael Pérez hit a homer off Wilson in the third.

Wilson was lifted with two outs in the seventh after giving up singles to Will Craig and Wilmer Difo. A.J. Minter struck out Pérez to end the inning.

Braves right-hander Luke Jackson walked Will Craig to open the ninth and gave up a one-out single to Wilmer Difo before pinch-hitter Ildemaro Vargas grounded out to end the game.

Pirates: 3B Ke’Bryan Hayes, on the 60-day IL with a left wrist strain, began his rehab assignment with Triple-A Indianapolis. He is eligible to return on June 3. “He’s missed enough time that we have to build him back up,” Shelton said. … RHP Trevor Cahill was placed on the 10-day IL with left side discomfort. Shelton said no decision has been made on who will fill Cahill’s next scheduled start on Tuesday against the Chicago Cubs. RHP Kyle Crick (right triceps) was activated off the 10-day IL.

Braves: RHP Shane Greene, who re-signed with Atlanta on May 9, was scheduled to make his first appearance for Triple-A Gwinnett on Saturday night. Greene, 32, had a 2.60 ERA in 28 games with Atlanta in 2020. … RHP Jacob Webb was optioned to Gwinnett to clear a roster spot for Wilson, who was recalled before the game.

Following the game, Atlanta acquired RHP Yoan López from the Arizona Diamondbacks for minor league OF Deivi Estrada. López was optioned to Gwinnett. López had a 6.57 ERA in 13 games with Arizona this season. He has a 4.25 career ERA in four seasons, all with Arizona.

Wilson, 23, was recalled from Triple-A Gwinnett for his fifth start of the season. Manager Brian Snitker has been impressed by Wilson’s mature approach to remaining positive when he has been sent back to Gwinnett.

“You’ve got to be pretty mentally strong,” Snitker said. “He just keeps fighting the fight.”

“I think it just comes down to two or three pitches that I missed and they took advantage of it,” Keller said.

“I thought he executed some pitches but you have to execute a lot of pitches to this group,” Shelton said of the Braves. “He left pitches in the middle and they got hit out of the ballpark.” 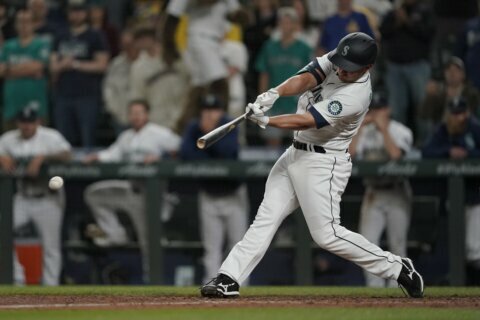