There was no fireworks show on Friday night, just Giancarlo Stanton.

Stanton busted out of his slump with two rocketed home runs — one with a 118 mph exit velocity, the highest in the majors this season — and the New York Yankees connected four times in a 5-3 win over the Cleveland Indians.

Stanton hit a 429-foot solo shot in the third inning off Logan Allen (1-3) and added another in the fifth for his first multi-homer game since Sept. 27, 2018. Stanton’s homers sent a rumble through the ballpark and New York’s dugout.

Stanton, who has been struggling at the plate, downplayed his big night.

“It was nice to catch up to some fastballs and put the barrel on the ball,” he said.

New York has won two straight and the Yankees, who overcame a 3-0 first-inning deficit for the second game in a row, are beginning to find their stride after a horrendous start.

Like many of his teammates, Stanton came staggering into the series with a .158 batting average and in a 3-for-34 slump. Boone gave him Thursday off, and the rest seemed to help one of baseball’s most feared sluggers — when he’s locked in.

After the Yankees rallied to tie it 3-all with a three-run second on the homers by Hicks and Odor, Stanton put them ahead for good in the third with his laser into the left-field bleachers, a 118 mph screamer. Earlier this season, Stanton hit a single that registered 120 mph, the hardest-hit ball of 2021.

In the fifth off reliever Trevor Stephan, Stanton made it 5-3 with a 418-foot shot that crashed safely into a protective net in the center-field bullpen.

Boone was awed by the home runs.

“It’s like, (Indians DH) Franmil Reyes smokes a ball, big man, and smokes a ball to left and G comes up and goes, ‘That’s nice, but watch this one,’” Boone said. “You don’t see balls hit like that. I don’t know what the numbers ended up being on them, but two really impressive swings.

“When he’s locked in, when he hits them like that, it’s different than anyone I’ve ever seen.”

Stephan was impressed as well.

“Just tried to let it rip and he let it rip, too,” he said. “It was my best versus his best. I don’t really regret the pitch, I regret the location. It was loud, but it’s the big leagues, you know? It’s going to happen.”

Yankees starter Jordan Montgomery settled in after a 37-pitch first inning, but was lifted in the fifth, one out shy of qualifying for the win.

Lucas Luetge (1-0) came on and got four outs and was credited with his first win in the majors since Sept. 4, 2013, with Seattle. The left-hander kicked around in the minors the past few seasons before signing with New York in March.

Luetge said he wasn’t aware of his long-awaited win until receiving a congratulatory text from a friend.

“I really wasn’t paying attention to what part of the game I was in,” the 34-year-old said. “I was just trying to get outs, but afterward I was like, ‘That’s pretty cool.’”

Darren O’Day and Chad Green pitched an inning apiece before closer Aroldis Chapman worked the ninth for his fourth save.

“Relationships that you build over the course of eight or nine years,” he said. “You spend that amount of time somewhere, you become really close to a lot of the people. I value that more than statistics or accomplishments or anything like that.”

Now in New York’s rotation, Kluber returned to Progressive Field for the first time since the Indians traded him in 2019. Clean shaven to conform to the Yankees’ long-standing no-facial-hair policy, he caught up with some old and dear friends.

“He was an incredible contributor on the field and in the clubhouse,” Antonetti said. “He set new standards for what dominance and extraordinary performance looked like on the field. But he was also willing to help set that example and lead the way for another group and help the guys around him develop.”

Two of baseball’s best tangle as Gerrit Cole (2-1) starts against Shane Bieber (2-1), who can match Randy Johnson’s major league record with at least eight strikeouts in 17 straight games. The Yankees pounded Bieber in Game 1 of last year’s wild-card round. Cole had 13 strikeouts.

“It didn’t end the way that we wanted it to, or that I wanted it to, personally,” Bieber said. “I’m definitely excited for tomorrow.” 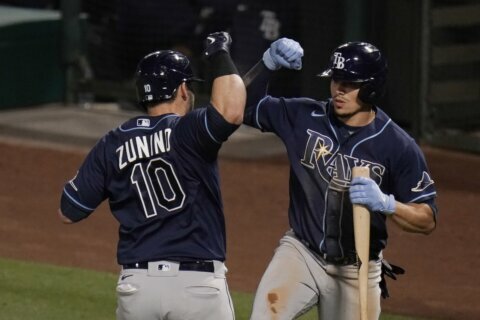