St. Louis won for just the second time in its last seven games while finding offense that had been missing in the defeats. The Cardinals averaged 2.6 runs in their last five losses.

Cardinals manager Mike Shildt pointed to the Cardinals’ ranking high in two important hitting categories prior to the contest, citing the fact they entered Saturday No. 1 in the league in hard-hit percentage and fourth in exit velocity as proof that positive results were forthcoming.

And he was right.

“The proof is in the results today,” he said. “We’ll be very confident when our process is positive.”

Rhys Hoskins had three hits and Alec Bohm drove in two runs for the Phillies, who played without Bryce Harper. The Phillies star outfielder sat out after waking up Saturday with tightness in his lower back.

Harper said after Friday’s 9-2 win over the Cardinals that he hoped the Phillies could build some offensive momentum on that performance. But it was St. Louis whose hitters got their bats going.

St. Louis broke the game open with six runs in the third off Matt Moore (0-1). Moore recorded consecutive outs to start the frame before a two-out barrage.

Molina drove an 82 mph changeup over the wall in left for a three-run homer that made it 3-1.

“He’s looking to do damage,” Shildt said. “He’s putting good swings on it.”

DeJong followed with a solo shot to straightaway center, and it was 5-1 after Dylan Carlson’s RBI double.

“Today we did not play well, did not pitch well, but we have a chance to win the series,” Girardi said.

Philadelphia got a pair of runs back in the bottom of the frame, but the Cardinals answered with three more in the fourth on Arenado’s two-run homer and Molina’s second of the contest, a drive to deep left that made it 9-3. It was the eighth career multihomer game for the 38-year-old veteran and nine-time All-Star.

As productive as the Cardinals were, they left some runs on the field. St. Louis loaded the bases with no outs in the sixth but didn’t score. Carlson struck out and Justin Williams grounded into a 1-2-3 double play.

Kim made his first start after being sidelined by back tightness at the season’s start. The left-hander had a promising debut with the Cardinals in 2020 with a 1.62 ERA in eight games, seven of which were starts. He wasn’t as stingy against the Phillies, giving up three runs and five hits with four strikeouts and a walk in three innings, but the Cardinals didn’t need him to be.

Moore, an offseason free-agent signee who pitched in Japan last season, continued his early season struggles. His ERA rose to 10.64 in three starts after surrendering five earned runs and four hits with five walks in 2 2/3 innings.

Shildt talked in depth about the club’s hitting before the contest, saying he was encouraged by the process if not the results.

“We won’t excuse results, we know results and expectations are high,” he said. “But the challenge of this wonderful game that we play and we enjoy that can also be maddening at times is you can do a lot of things right and not get rewarded. … Sometimes you’ve got to let it roll a little bit. It’s not about an alibi, but we can be fact-driven and process driven.”

St. Louis’ Tommy Edman extended his hitting streak to 12 straight games with an infield single in the fifth.

Phillies: Harper was bothered by a back injury at the end of last season that affected his throwing. He may have been injured Friday when he drove two balls to the warning track and doubled with a headfirst slide into second.

“He was stiff today,” Girardi said. “We just think it’s day to day. I don’t want to put him in a situation where he goes out and plays and it gets worse. We’ve got a long season.”

Girardi lifted Jean Segura in the sixth inning because the second baseman had an upset stomach. 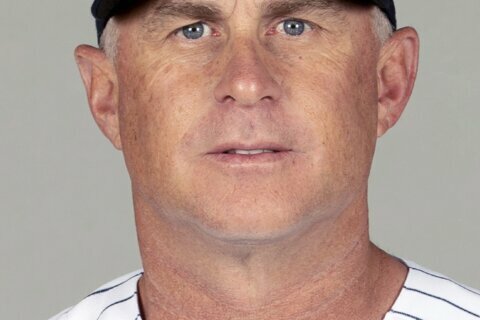 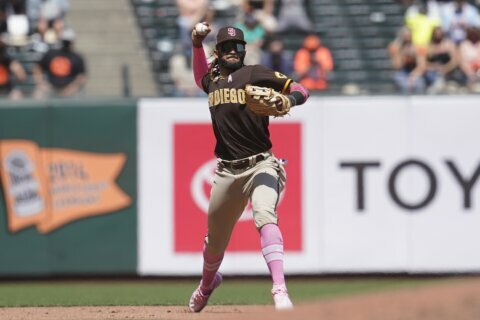 Padres’ Tatis, Myers test positive for virus; 3 others out 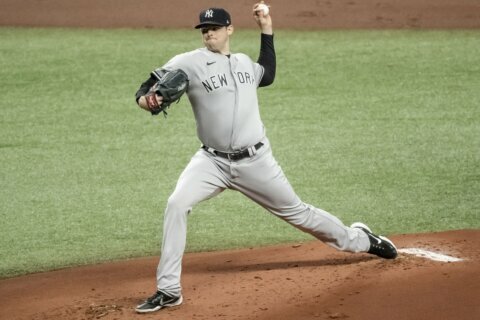