ANAHEIM, Calif. (AP) — Adolis García homered and doubled off Dylan Bundy, Kohei Arihara took a shutout into the sixth inning and the Texas Rangers got their offense on track in a 6-4 win over the Los Angeles Angels on Monday night.

Texas eclipsed its entire output from a three-game home series against Baltimore over the weekend, when it totaled just four runs.

“These guys have been working hard and we’ve had a good dialog every day,” Rangers manager Chris Woodward said of his hitters. “It wasn’t a grand slam or a three-run homer, it was just using the whole field and really running the bases well.”

Justin Upton homered for the Angels, while Bundy (0-2) gave up five runs and seven hits and was knocked out the game during the Rangers’ five-run sixth inning. The right-hander had six strikeouts with two walks.

Arihara (2-1), in his fourth major league start, retired Angels star Shohei Ohtani in two at-bats, although one was a deep fly to center that García caught while crashing into the padded wall. Arihara and Ohtani were teammates in Japan with the Nippon Ham Fighters from 2015-17.

“Honestly, I felt like it was going to be gone off the bat,” Ohtani said through an interpreter. “I thought it was one of the better swings I’ve put on the ball this season. And I feel like the wind brought it back a little bit. That might’ve had something to do with it. I was happy with the approach but didn’t get the right results.”

Ohtani even flipped his bat as he left the batter’s box, but Arihara had no issue with his friend’s reaction.

Arihara gave up just two hits over 5 2/3 scoreless innings with two walks and six strikeouts. Ian Kennedy pitched the ninth inning for his fourth save.

In just his seventh game this season and second start in center field, García made a case for more playing time when he got to Bundy for a third inning home run, reaching the seats in right-center for a 1-0 lead. It was his second home run of the season.

“I’m proud of him and he’s doing his thing (with) the opposite-field homer, the double, stayed through a slider,” Woodward said. “I just think he’s getting better and better.”

The Rangers widened their advantage in the sixth. Nick Solak started the scoring with a single to right field, as Joey Gallo came to the plate only after the Angels’ Jared Walsh failed to field the ball cleanly for an error.

Willie Calhoun had an RBI single, forcing Bundy from the game, and Jose Trevino followed with a sacrifice fly. García reached on a fielding error by third baseman Luis Rengifo that allowed Calhoun to score, and Brock Holt brought home the fifth run of the inning with a single.

The Angels failed to gain any traction offensively early after not playing the previous two days because of COVID-19 issues with their scheduled opponent, the Minnesota Twins. The unexpected downtime was a concern of Angels manager Joe Maddon before the game.

“We weren’t needing it, we weren’t wanting it but it had to happen that way,” said Maddon, who admitted that his pitchers probably were the group impacted the most. “Later in the year that might have been welcomed. It wasn’t as welcomed right now.”

Albert Pujols singled in a run to cut Texas’ advantage to 6-2 in the seventh. The slow-footed Los Angeles star managed to steal third base without a slide later in the inning, getting a big jump when Rangers pitcher Kyle Cody stopped paying attention to him.

“Great play, heady play, veteran play, all those different kind of things,” Maddon said of Pujols’ steal, the veteran’s first since he had three in 2019.

Pujols scored on a single by Kurt Suzuki, and Jose Iglesias scored on Cody’s wild pitch, making it 6-4.

Ohtani will not be performing double duty when he returns to the mound Tuesday against the Rangers.

The Angels’ right-hander will start for the first time since April 4 after working his way through a blister issue on the middle finger of his throwing hand. Maddon said Ohtani will not bat because he is on a 75-pitch limit and the club doesn’t want to burn its designated hitter.

Angels: 3B Anthony Rendon (groin) began light baseball activity, hitting off a tee and working in the field. There remains no timetable for his exact return, but Maddon said, “I don’t think it’s far down the road.”

Ohtani (0-0, 1.93 ERA) will face the Rangers for the first time in his career, while making his 14th major league start. He will square off against Rangers right-hander Jordan Lyles (1-0, 4.70), who has given up six of his eight runs this season on home runs. 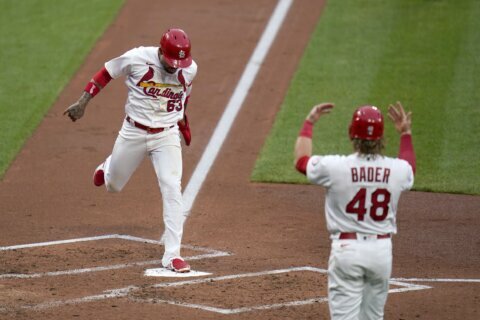 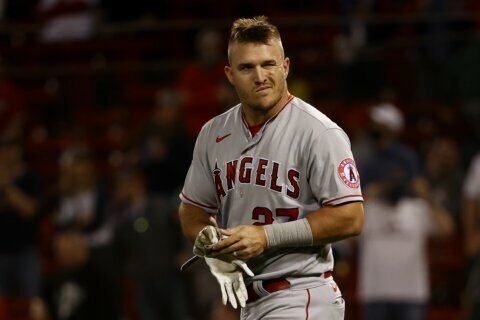 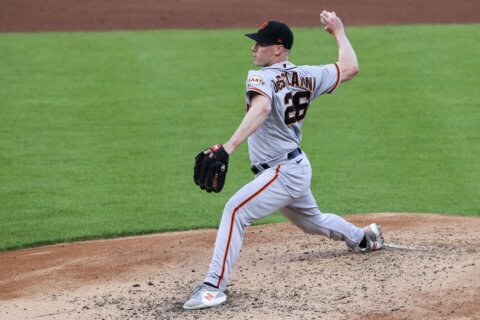