Castellanos strikes back with his bat, leads Reds over Cards

CINCINNATI (AP) — Nick Castellanos came out swinging with his bat a day after being ejected for inciting a bench-clearing melee, hitting a three-run homer and triple to lead the Cincinnati Reds to a 12-1 rout over the St. Louis Cardinals on Sunday.

Tyler Naquin also a three-run shot for the Reds, who won two in a row to take the opening series in matchup of NL Central teams that earned wild-card spots last season.

“You want to win always, but what happened yesterday really heightened the mood,” Naquin said.

The fiery Castellanos flexed and jawed at St. Louis reliever Jake Woodford after scoring on a wild pitch on Saturday night. Catcher Yadier Molina took exception, grabbed Castellanos and a series of scuffles ensued that spilled into the outfield. Castellanos was the only player tossed.

There was no spillover from the trouble in the wrap-up game.

Castellanos kept up his big series with a triple in the fourth inning, scoring on a single by Votto. Then with two on and two outs in the fifth, he hit a 91 mph fastball from Carlos Martinez (0-1) into the Reds bullpen in left-center field for a 4-1 lead.

Castellanos went 6 for 11 in the series, scoring six runs and driving in five. He homered twice, tripled and doubled.

“There is more energy in the clubhouse, more energy on the field,” Castellanos said, clearly ready to move on from the Saturday incident. “Reds Country is happy right now.”

Naquin, who started in left field for the ailing Jesse Winker, homered into the right-field seats during a six-run sixth inning.

“It just wasn’t real pretty for a little bit of the last part of the game,” Cards manager Mike Shildt said. “It’s not something I’m concerned about because it’s something we won’t see regularly.”

Reds starter Jeff Hoffman (1-0), acquired from the Colorado Rockies in an off-season trade, gave up a just run on three hits through five innings and struck out six.

“That one definitely felt good,” Hoffman said. “Every day when I come to the park I feel like it’s a new beginning. It is great to be here.”

St. Louis scored its lone run in the fifth when Tyler O’Neill doubled and Molina singled, the only time Reds pitching allowed the Cardinals back-to-back hits.

The 27 runs scored were the third most ever scored by the Reds in the first three games of the season. The 1895 team scored 36 in the first three, and the 1976 team had 33, according to the Elias Sports Bureau.

“Our guys worked so hard last year and didn’t get the results,” Cincinnati manager David Bell said. “It is good that you see the confidence when you get results. We have a long way to go, but it’s important that our offense is a big part.”

Martinez gave up the big hits to Castellanos, but he and Shildt weren’t too disappointed in his performance. He gave up four runs on four hits through five innings. The next three relievers surrendered eight runs on eight hits.

Cardinals: Shildt said LHP Kwang Hyun Kim (back) will throw in a simulated game on Tuesday, and RHP Miles Mikolas (right shoulder) would soon report to the team’s alternate site to continue rehab. Both pitchers started the season on the 10-day disabled list.

Reds: Start RHP José De León against Pittsburgh RHP JT Brubaker as their homestand continues with a three-game series against the Pirates. 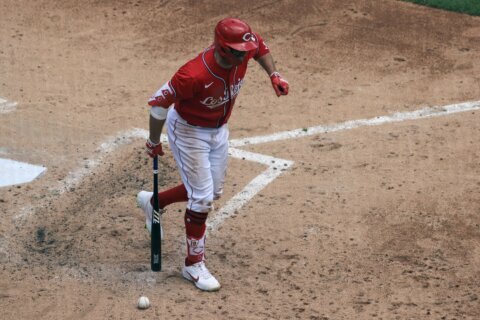