The Philadelphia Phillies slugger was 1 for 3 with an RBI single as a designated hitter in a 15-0 win over the New York Yankees on Thursday.

“I felt strong, felt normal,” Hoskins said. “If you’re asking me, there’s no reason why I won’t be ready for opening day, barring something really weird happening.”

Hoskins didn’t hesitate to dive back to first base on a pickoff attempt, landing on his surgically repaired left elbow.

“It was nice that I reacted like I normally would,” he said. “I hadn’t really done that yet. I was able to get up and say, ‘There’s another check mark.’”

Hoskins anticipates playing first base next week but still has plenty of time to be ready for the season opener on April 1. He’s a major part of an offense that tied for fifth in the majors in runs scored last season.

Batting mostly out of the No. 2 spot in the lineup, Hoskins hit .245 with 10 homers, 26 RBIs and an .887 OPS before he tore the ligament in his elbow in September, missing the final 17 games.

Three players vying for the starting job in center field homered against the Yankees. Scott Kingery and Odubel Herrera went deep once and Mickey Moniak, the No. 1 overall pick in 2016, connected twice.

Herrera started for the second time as he returns after missing most of the 2019 season following his arrest on domestic violence charges. He didn’t play last year.

Herrera addressed the entire team before the game.

“He apologized and he’s trying as hard as he can to be the best teammate he can be,” Hoskins said. “He said he was sorry for putting the organization and his teammates in this situation. With something the magnitude of this, it’s going to take some time to earn trust back.”

Bryce Harper is set to make his spring debut as a designated hitter against the Pirates on Friday. Manager Joe Girardi said several relievers who haven’t appeared in a game yet are also slated to take the mound, including newcomer Archie Bradley. 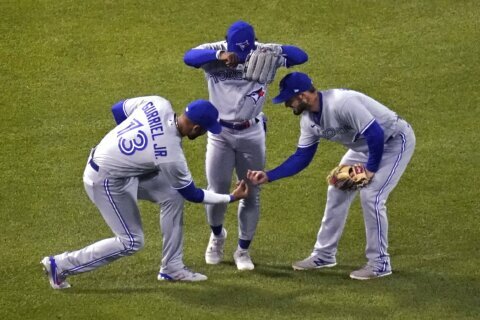