A week before opening day, the Chicago White Sox found out slugger Eloy Jiménez will be closed down for most…
Listen now to WTOP News WTOP.com | Alexa | Google Home | WTOP App | 103.5 FM

A week before opening day, the Chicago White Sox found out slugger Eloy Jiménez will be closed down for most of the season.

Jiménez is expected to be sidelined for five to six months after rupturing his left pectoral tendon trying to make a play in the outfield during an exhibition game.

The 24-year-old Jiménez needs surgery to repair the injury, putting his season in jeopardy. General manager Rick Hahn said the team will know more when he begins the rehab process.

“Obviously a difficult loss for us, important part of our offense, and one that is a bit of a shock to the system,” Hahn said Thursday on a video conference call, a day after Jiménez was hurt.

Chicago, coming a playoff appearance and aiming at the AL Central title, opens next Thursday at the Los Angeles Angels.

Jiménez was hurt Wednesday when he tried to make a leaping grab at the wall on Sean Murphy’s solo homer for Oakland. Jiménez’s left arm barely moved as he walked off the field with a trainer.

The injury immediately led to another round of questions about whether Jiménez might be better suited for designated hitter than left field — where he has gotten hurt a couple times since his big league debut in 2019.

“Our biggest concern is Eloy. He’s the guy who’s hurt. He’s the guy that’s got to go through the rehab,” manager Tony La Russa said.

Jiménez, who throws and bats right-handed, was acquired in a July 2017 trade with the crosstown Cubs. He hit 31 homers in his first year in the majors in 2019. He batted .296 with 14 homers and 41 RBIs in 55 games during the pandemic-shortened season.

“Ultimately, at some point in the much distant future, we’ll talk to him and talk through a plan about perhaps making some better decisions or what we are (expecting) of him going forward from a defensive standpoint,” Hahn said.

Tampa Bay reliever Nick Anderson has a partially torn ligament in his pitching elbow and likely will be sidelined beyond the All-Star break, a person familiar with the right-hander’s injury told the Associated Press.

The person spoke on the condition of anonymity Thursday because the American League champions had not announced they will begin the season without Anderson on April 1. The injury was first reported by The Tampa Bay Times.

Anderson, who is not expected to need surgery, has been a key component of Tampa Bay’s bullpen since being acquired from the Miami Marlins in July 2019. He went 2-1 with a 0.55 ERA and six saves in 19 outings during the pandemic-shortened 2020 season before appearing in 10 of the team’s 20 postseason games.

Anderson, 30, allowed hits to four of six batters he faced during a spring training outing Wednesday.

PREPS TO PREPPING FOR OPENING DAY

Wow, that was quite a high school rotation!

Max Fried, Lucas Giolito and Jack Flaherty — teammates on the 2012 baseball team at Harvard-Westlake School in Los Angeles — have all been chosen to pitch on opening day in the big leagues.

Fried, coming off a 7-0 season with the Atlanta Braves, got the word Thursday that he’ll start an opener for the first time in his career when he goes next Thursday against Aaron Nola and the Phillies.

“That’s crazy,” Fried said. “I’m really happy, really excited for those guys. They worked extremely hard to put themselves in that position. To be pitching the same day at those guys is pretty cool.”

Reigning NL batting champion Juan Soto left in the middle of the first inning with what Washington manager Dave Martinez said was a cramp in his right calf.

“I didn’t want to take any chances,” Martinez said.

The Nationals slugger drew an 11-pitch walk in the top of the first. Soto stayed in to run while the next two batters were retired. He then was replaced in right field in the bottom half of the inning by Gerardo Parra.

Rookie Jazz Chisholm singled and walked twice, stealing three bases and scoring two runs for Miami. Jesus Aguilar had a two-run single in a four-run third, scoring on Garrett Cooper’s second home run. Miguel Rojas hit his second homer and had three hits. Sixto Sánchez made his third start, yielding a run on three hits and a walk in 3 1/3 innings.

Reliever Luis Avilán opened for Washington, allowing a run but no hits, walking two in two innings. Closer Daniel Hudson followed Avilán and retired two batters, yielding two runs on three hits and a walk. Ryan Zimmerman had an RBI single in the third. Gerardo Parra doubled in a run in the eighth.

Fernando Tatis Jr. homered in his return two days after leaving a game with shoulder discomfort, easing fears the 22-year-old star might not be in top form for opening day. He cracked a three-run homer to the opposite field in the sixth inning while serving as the designated hitter, his third homer this spring. Hours after being named San Diego’s opening day starter, Yu Darvish allowed four runs and four walks in three innings.

Texas had eight stolen bases, including three each for Charlie Culberson and Adolis Garcia. Garcia also had a solo homer among his three hits, and Jose Trevino had three hits and two RBIs.

Chris Owings hit two home runs and C.J. Cron had three hits, including a home run, for Colorado. Austin Gomber gave up five runs on eight hits, four of them home runs, 5 1/3 innings. Daniel Bard struck out two of the three batters he faced in the ninth.

Former Yankees shortstop Didi Gregorius hit a three-run homer to cap a five-run first inning for Philadelphia. Matt Moore was knocked around in his fourth start and fifth appearance — he retired two batters, yielding two runs on three hits while throwing 29 pitches in the first before Zach Warren came in to get the final out. Moore returned to the mound in the second, struggling through 3 2/3 innings and surrendering five runs on six hits and two walks while striking out six. Bryce Harper doubled and singled.

Aaron Judge hit his first home run of the spring, connecting in the first inning for a long drive after DJ LeMahieu led off with a single. Gleyber Torres hit his third homer. Michael King didn’t make it out of the first inning in his third start for New York, surrendering five runs on two hits, a walk and two hit batters, recording one out. Trevor Lane got the final two outs before King returned to the mound in the second. King allowed seven runs on five hits, two walks and hit three batters in 2 1/3 innings.

Boston rookie Bobby Dalbec hit his seventh home run, breaking a tie with teammate Michael Chavis and the Dodgers’ Corey Seager for most in the majors this spring.

Randy Dobnak, who has locked up the fifth spot in the Minnesota rotation with his performance this spring, made his third start in his fourth appearance, allowing one run on Dalbec’s homer in five innings. It was the first run allowed by Dobnak in 13 2/3 innings. Byron Buxton doubled with the bases loaded in the first, driving in three. Josh Donaldson hit his second home run.

Philip Evans had four hits for Pittsbugh. Todd Frazier doubled and singled in his first game since being slowed by lower back tightness on March 19.

Steven Matz made his fourth start for Toronto and first against a team other than the Phillies, pitching 5 1/3 innings and allowing two runs on six hits and two walks. Vladimir Guerrero Jr. had an RBI double and scored on a single by Lourdes Gurriel Jr.

Casey Mize had his best outing in his fourth start and fifth appearance for Detroit, striking out nine in four innings. Mize, who came into the game having allowed 11 runs on 12 hits and 10 walks in 10 innings this spring, gave up two runs on five hits with no walks. Starter Michael Fulmer pitched three innings in relief, yielding one run on three hits, striking out five. Tigers pitchers combined to fan 17. Eric Hae hit his third home run.

Nick Margevicius yielded five hits over 3 2/3 innings for Seattle, walking two and striking out four. Jack Reinheimer and Cal Raleigh each hit a two-run double and Jarred Kelenic had an RBI double.

White Sox starter Dylan Cease allowed a run over five innings, giving up three hits, issuing four walks and striking out six. Zack Collins, the 10th overall draft pick in 2016, had two hits, including a home run, to raise his average to .333. Nick Madrigal, Billy Hamilton, Adam Eaton and Nick Williams each stole second base in the first four innings.

Drew Smyly had his best outing in his third start for Atlanta, throwing five shutout innings. The left-hander, who began the day with an 11.25 ERA in his first spring with the Braves, allowed one hit and one walk, striking out six. Marcell Ozuna hit his second home run and doubled. Chris Martin struck out the side in the ninth.

Michael Wacha made his fourth start for Tampa Bay, pitching five innings and allowing one run on four hits and a walk. It was the first run allowed by Wacha in 12 innings in his first spring with the Rays. Chaz Roe replaced Wacha after Ozzie Albies’ hit to lead off the sixth, surrendering Ozuna’s homer. Austin Meadows drove in a run with a pop-fly double that Braves center fielder Cristian Pache lost in the sun. Greg Jones, one of five shortstops on the Rays’ top 10 prospect list, had been 0 for 8 this spring until homering.

Dustin May pitched five solid innings for Los Angeles, allowing a run, two hits and a walk while striking out six. Kenley Jansen followed by striking out two of his three batters. Matt Beaty homered for the Dodgers, and Will Smith had two hits and three RBIs.

Right-hander Adbert Alzolay continued to struggle for Chicago, allowing two runs in 3 1/3 innings. The 26-year-old showed promise over four starts last season but has a 10.57 ERA this spring. The Cubs had just five hits.

Brett Anderson pitched two-run ball over 5 2/3 innings, allowing five hits and striking out three for Milwaukee. The 33-year-old left-hander has a 2.35 ERA in five starts this spring. Anderson also had an RBI single. 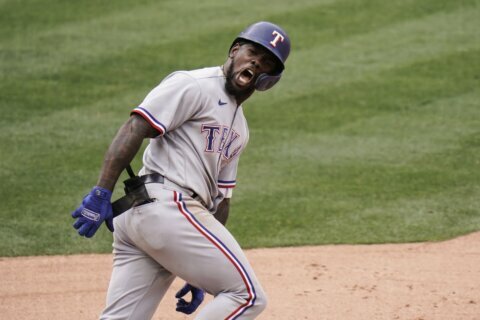 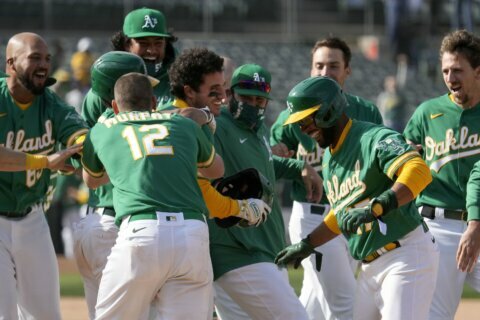 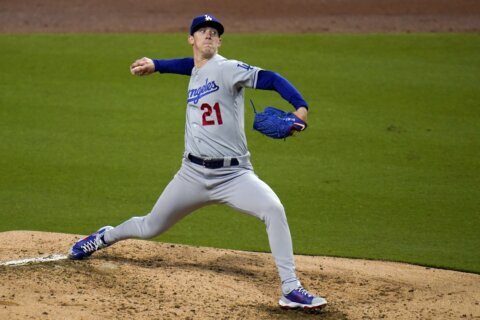