CLEVELAND (AP) — Early in training camp, Indians slugger Franmil Reyes overheard one of the team’s clubhouse attendants who was cleaning baseballs comment that they didn’t seem as lively this year.

“He was like, ‘Oh my God, these balls are not flying anymore,’” Reyes said. “And in his ear I was like, ‘Let’s see when Franmil hit it, let’s see how far it goes.’”

Reyes laughed and broke into a big smile — as big as his swing.

In an exhibition game on Wednesday, Reyes turned on a pitch from Arizona’s Taylor Widener, shooting the ball skyward through the thin desert air before it struck the bottom of the left-field scoreboard at Goodyear Ballpark.

It was one of those shots that travels outside the ballpark, the kind that reaches other clubhouses and players talk about for days.

“That was a real good swing,” Indians manager Terry Francona said. “I don’t care what time of the year it is, that’s a good swing.”

Before he ran toward first base, Reyes paused briefly to admire his drive. Satisfied, he dropped his bat and began his home run trot.

“Finally,” the 6-foot-5, 270-pound Reyes said afterward, busting out a wide grin. “Got the scoreboard, but not the one in Cleveland.”

The affable Reyes is hoping to launch some tape-measure shots this season for the Indians, who need to find another power source in the middle of their lineup after choosing not to re-sign first baseman Carlos Santana and trading All-Star shortstop Francisco Lindor, two of their most productive hitters.

Reyes, who came to Cleveland in 2019 from San Diego as part of the three-team trade that sent future Cy Young winner Trevor Bauer to the Reds, needs to find more consistency this year following a 2020 season that began so promising but fizzled.

A year ago at this time, the 25-year-old Reyes was crushing the ball in training camp. He was perhaps poised for a monster season before the COVID-19 pandemic shut down baseball for three moths. Reyes returned to the Dominican Republic and didn’t see any live pitching while he was away.

When the season resumed later in the summer, Reyes’ swing was AWOL. He was lost at the plate, flailing at pitches out of the strike zone. He had no plan of attack and as his strikeouts grew, so did his frustration.

But like the Northeast Ohio weather in August, Reyes got hot. He finished the month with a .313 average, seven homers and 22 RBIs and then opened September by going 5-for-5 and getting a hit in eight consecutive at-bats.

After hitting 37 homers in 2019 for the Padres (27) and Indians (10), Reyes has shown he’s the kind of hitter who can carry a team, and Francona wouldn’t mind seeing him dent a scoreboard now and then.

Reyes would prefer to play right field, but will likely be Cleveland’s full-time DH. All he really wants is a spot in the lineup — anywhere.

While he’s put the scoreboard at Progressive Field in his sights, Reyes hasn’t set any statistical goals for this season.

“Honestly, every year I say I’ll take whatever God gives me,” he said. “Whatever happens is going to happen. If I could control where the ball is going to land, probably a 1.000 average, right? I can control being ready for every at-bat and trying to hit the ball on the barrel every time.

“Wherever it lands, I know it’s going to be doing a lot of damage. Watch out with your gloves, guys.”

Francona doesn’t want to set any bars for Reyes, either. He believes if Reyes keep his swing compact, big things can happen.

“I do think if he stays with the-middle-of-the-field approach, it doesn’t mean he has to hit it in the middle of the field,” Francona said. “Remember when he got real hot last year, he was lining balls to right field and then they’d make a mistake and he’d whack it.

“If he gets himself in a position where he can cover the plate, he is going to hit more than he would if he’s just trying to pull the ball.”

NOTES: Francona and several Indians coaches received their first COVID-19 vaccines on Friday. Francona was reminded that just a couple years ago, he went skydiving during camp. “Yeah, times change,” he said. “Energy levels change. Health changes. But it was kind of nice to be able to do that to get started on it.” 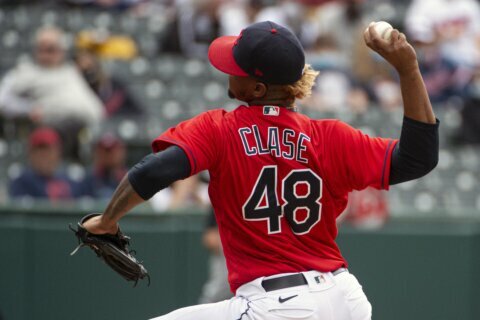 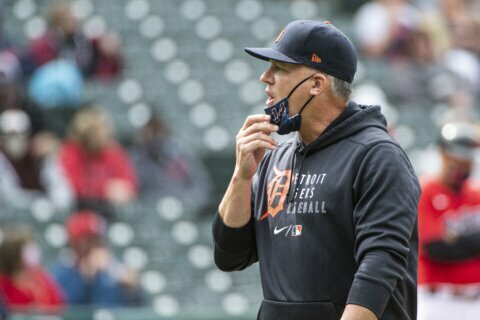 Darvish scheduled to start for Padres at Pirates