SEATTLE (AP) — Nearly three years have passed since Mitch Haniger was an All-Star and was viewed as part of the Seattle Mariners’ core.

Then came the injuries that sidelined Haniger for much of the 2019 season and all of last year’s truncated 60-game schedule.

“Injuries can derail your career, but at the same time I think you can come back stronger from them if you put in the time and learn your body better and kind of understand why those things happen,” Haniger said Thursday. “I think I’ve had a good handle on things and I’ve been excited to get back out there.”

When the Mariners gather for the start of spring training next month in Arizona, they expect Haniger to reclaim his spot as their everyday right fielder and a place in the middle of the batting order. By the time the regular season arrives in April, it will have been more than 600 days since Haniger last played in a regular season game.

The layoff has been long and arduous for Haniger, filled with setbacks and surgeries, but he now has expectations of being back on the field.

“What he looks like today, as opposed to what he looked like this time last year, is entirely different,” Seattle general manager Jerry Dipoto said. “He looks strong, he looks physical, he’s going through full baseball activity in a high-speed way that he just wasn’t able to do at any point over the last year and a half.”

Haniger’s breakout season in 2018 seemed to be a precursor. He hit .285 with 26 home runs and 93 RBIs, while also playing a solid right field defensively. Not only was he an All-Star, Haniger even received a few MVP votes.

When the 2019 season started and the Mariners began their rebuild, Haniger was the most talented player in their lineup. But the season was a struggle from the start before injuries started to mount.

First came a painful ruptured testicle after getting hit by a ricocheted foul ball. He never returned to the lineup after suffering the injury in early June, with setbacks due to abdominal and back issues during his recovery.

Before the 2020 season started, Haniger underwent sports hernia surgery, and then needed a discectomy to resolve back pain that emerged just before the start of spring training a year ago.

Even with the COVID-19 pandemic delaying and shortening the season, Haniger never recovered to the point where it made sense to try to return during the season.

“Just kind of ran out of time with the season and decided that once I wasn’t going to be able to play in minor league rehab games, I felt like it was the right decision to kind of make sure; I felt like this whole process wasn’t slow played at all, but make sure I do everything right, and make sure that I’m strong and really confident before I do anything,” Haniger said.

Dipoto and manager Scott Servais said they will likely ease Haniger into spring training. He will be entering a clubhouse that looks far different from the one he was last part of in 2019. Some of the prospects Haniger knew of two years ago are now contributors on the major league roster.

But unlike 2019 when Seattle was fully rebuilding, the Mariners believe they’ll be closer to ascending this season.

“I’m super excited, just the early reports and what our guys have been seeing out of him and his workouts,” Servais said. “He’s our right fielder. I don’t think there’s anything else to say about that.” 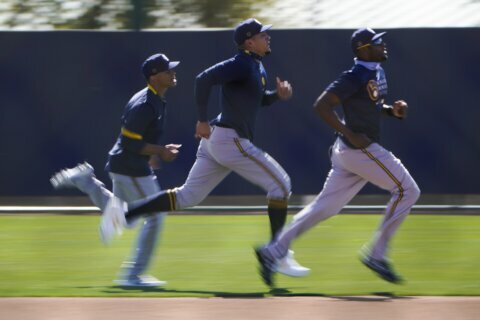