Roberts unsure if Turner, Price to play with Dodgers in 2021

Turner became a free agent in October after the Dodgers won the World Series for the first time since 1988. He tested positive for COVID-19 and was pulled from the deciding Game 6, then violated protocol by going on the field for the postgame celebration — his lone controversy in seven years with the club.

Turner batted .307, with 23 RBIs and four home runs in 42 games during last season’s abbreviated 60-game season. He spent time on the injured list with a hamstring strain.

In a virtual call with reporters Thursday, Roberts said bringing Turner back is “way up there” as a priority.

“What Justin does on the field, in the clubhouse and community, he’s one of the Dodger greats. His body of work is really special, unique,” the manager said. “But it’s a two-way deal, it’s the organization and also Justin and his family. Selfishly, I’ll take him as long as I can have him.”

At the same time, Roberts acknowledges Turner “is going to kick the tires on whatever opportunity presents itself.”

Price opted out of pitching his first season with the Dodgers because of the coronavirus pandemic. Traded to Los Angeles in February along with Boston teammate Mookie Betts, the former AL Cy Young Award winner has yet to indicate his plans for 2021.

“David is very in tune with what’s going on, is very intelligent,” Roberts said. “I know we’re better when he’s with us. As things become more clear, I know David will make a choice for him and his family.”

In other topics, Roberts said:

— Center fielder Cody Bellinger is ahead of schedule in his rehab from right shoulder surgery last month. The 2019 NL MVP is working out in Arizona and Roberts said he hopes Bellinger is “somewhat active” by the start of spring training.

— He is “very confident” that baseball will complete a 2021 season outside of a bubble despite the ongoing coronavirus pandemic. He cited the recent rollout of vaccines as well as the scheduled start date of April 1 for giving MLB time to fine-tune its plans. At the same time, Roberts acknowledged that a repeat of this year’s shortened season “would be pretty tough on everyone.” He said he would get vaccinated against COVID-19 when it becomes available to him.

— One of his most memorable days in the topsy-turvy season came in August, when the Dodgers and host San Francisco Giants refused to play their scheduled game in protest of the police shooting of Jacob Blake in Kenosha, Wisconsin. “That was really something I will never forget,” said Roberts, whose heritage is Asian and African American. “Having players really vulnerable and talking about their feelings, concerns and thoughts on misunderstandings of the Black player. That was very galvanizing.”

— The team’s World Series victory over the Tampa Bay Rays was “certainly a lot more relief than elation,” Roberts said. “That probably lasted a good week. Then the joy started to filter in, so I’m still on a high.”

Lorenzen, Castillo among 6 to reach deals with Reds 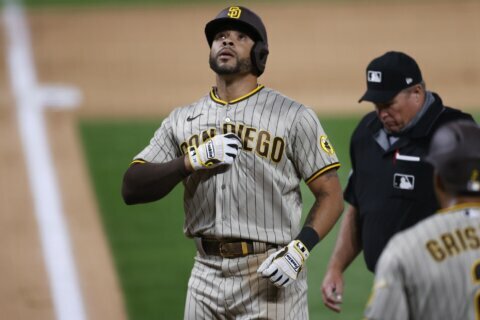 Padres avoid arbitration with Pham, 4 others