Major League Baseball announced Wednesday that it will make a limited number of seats available for fans to watch the World Series and the National League Championship Series in person this year. This is the first time fans will be allowed to attend a Major League Baseball game since the onset of the coronavirus pandemic, the league said.

Approximately 11,500 seats per game will be available at the Globe Life Field in Arlington, Texas, which typically seats just over 40,000 people, MLB said in a statement. About 10,500 fans will be seated throughout the ballpark and 950 will be in suites. Rather than have competing teams travel back and forth between their home ballparks, Globe Life Field will host the entirety of the NLCS and World Series this year.

The league said that tickets will only be sold in groups of four adjacent seats, known as “pods.” Each pod will be a minimum of six feet from the next, and no seats will be sold within 20 feet of where a player could be on the field, in the dugouts or in the bullpen. Masks will be required unless fans are eating or drinking at their seats, and hand sanitizer will be available throughout the park.

The league assured fans that it “has received the appropriate approvals to host fans in the ballpark and will implement fan health and safety protocols in conjunction with state and local regulations.” 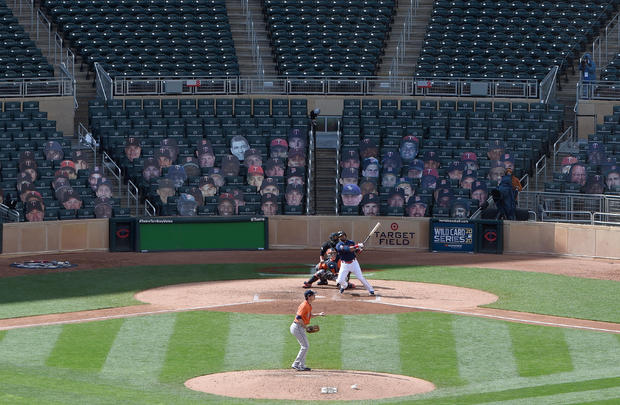 The Minnesota Twins face off against the Houston Astros during the American League Wild Card Round on September 30, 2020, with no fans in attendance.

The 2020 MLB postseason comes after the league was beset by coronavirus outbreaks during the shortened regular season. Multiple series were postponed when players on teams including the Miami Marlins and the St. Louis Cardinals tested positive for the virus. As of September 25, the date of the league’s most recent coronavirus update, 57 players and 33 staff members had tested positive for the virus during the season.

But after a rocky start, the league’s prospects appeared to improve. No new players tested positive in the week leading up to September 25, the league said, adding that “Among Major League players, there have now been no new positives for 26 consecutive days and in 34 of the last 35 days.”

White Sox-Tigers game postponed until Monday due to rain