LOS ANGELES (AP) — “Sweet” Lou Johnson, who hit a key home run for the victorious Los Angeles Dodgers in Game 7 of the 1965 World Series and scored the only run in Sandy Koufax’s perfect game the same year, has died. He was 86.

Johnson died Wednesday night at his home in Los Angeles, according to the Dodgers, who were informed by his wife. He had been in ill health and died a day after his birthday.

Johnson was signed by the New York Yankees in 1953. He spent about a decade in the minors, made his big league debut with the Cubs on April 17, 1960, was traded to the Angels for pitcher Jim McAnany the following April and after one game with California team was dealt to Toronto in the International League. The Braves acquired him as part of a working agreement with Toronto, and he hit .282 in 61 games for Milwaukee in 1962.

Johnson was traded to the Detroit Tigers and spent 1963 and ’64 in their minor league system before being traded to the Dodgers for pitcher Larry Sherry.

Johnson made it back to the majors beginning in 1965 after starting left fielder Tommy Davis broke an ankle in May. Johnson batted .260, with 57 runs and 58 RBI in 130 games as Davis’ fill-in.

Johnson also scored the only run in Sandy Koufax’s perfect game victory on Sept. 9, 1965, when he walked, went to second on a sacrifice bunt, stole third and scored on a throwing error by Chicago Cubs catcher Chris Krug.

The Dodgers advanced to the 1965 World Series against Minnesota. Johnson had eight hits, including two homers, the second the game-winner in Game 7.

In 1966, Davis returned to left field and Johnson played mostly in right with Willie Davis in center. Johnson set career highs of 152 games, 526 at-bats, 143 hits, 17 homers, 71 runs and 73 RBIs. He averaged .272 and the Dodgers advanced to the World Series again, where they were swept in four games by Baltimore.

Born Louis Brown Johnson in Lexington, Kentucky, on Sept. 22, 1934, he was nicknamed Sweet Lou upon joining the Dodgers because of his infectious smile and he was always clapping.

“Dodger fans will always remember his important home run in Game 7 of the 1965 World Series, when he was clapping his hands running around the bases,” team president and CEO Stan Kasten said. “Lou Johnson was such a positive inspiration at Dodger Stadium with our employees and our fans as well as throughout the community in the appearances he made on behalf of the organization.”

Johnson worked for the Dodgers for 40 years, between his time as a player and in the team’s community relations department.

He is survived by his wife Sarah, and children Lauren, Carlton and Quinton. 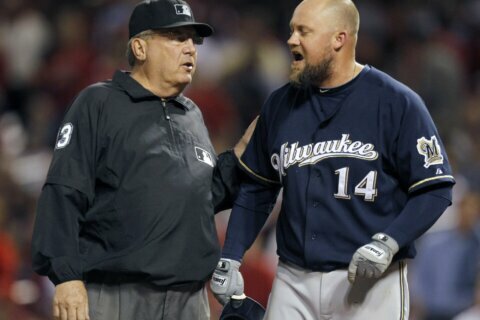