ARLINGTON, Texas (AP) — Former ace Clayton Kershaw is having more back issues, Kenley Jansen hasn’t seen the mound yet with his closing role unclear and baseball’s highest-scoring offense stayed silent until it was too late.

It’s no wonder the Los Angeles Dodgers are down 2-0 in the NL Championship Series to the Atlanta Braves, a deficit the previous 14 NL teams to face in the best-of-seven format couldn’t overcome.

The Dodgers, who won their first five playoff games before dropping their second straight 8-7 on Tuesday night, can’t get in gear in the first neutral-site NLCS and could be headed to 32 years and counting since their last championship.

Los Angeles trails 2-0 in an NLCS for the first time since 2013, when it lost in six games to St. Louis. The Dodgers have returned to the postseason every year since, finishing short of a title each time.

At least LA showed some life late after trailing 7-0 on Tuesday.

Corey Seager drove in four runs in the final three innings with a homer and a double, while Mookie Betts, Max Muncy and Cody Bellinger each had his first hit of the series in a four-run ninth-inning rally that fell short.

“I thought that just late, us showing some life offensively was very good to see,” manager Dave Roberts said. “To see us fighting, that was a good thing.”

Kershaw was scratched because of back spasms not long before the left-hander was to make his second appearance — both in the playoffs the past week — a few miles from the three-time Cy Young Award winner’s hometown of Dallas. Tony Gonsolin filled in, pitching three perfect innings in his postseason debut before allowing five runs while getting just four more outs.

Roberts said right-hander Julio Urías would start Game 3 and was noncommital on Kershaw for Game 4.

For six innings, not even periodic chants of “Let’s go, Dodgers” from the pandemic-reduced, mostly masked crowd of 10,624 could help in the second game with fans this season. The first was the series opener in the new 40,518-seat home of the Texas Rangers.

With the bases loaded and two outs in a scoreless game in the third, Smith bounced into a force out at third base. The Dodgers, who led the majors in runs during the regular season, didn’t put more than one runner on base in an inning again until they trailed 7-0 in the seventh.

Then LA finally gave Dodgers fans a reason to get loud.

“I think all night we took better ABs,” Seager said. “We go through the middle parts of the innings last night and kind of the ABs got away from us, had some quick innings. All tonight, we had really good ABs and just continue that tomorrow.”

Seager’s three-run homer in the seventh inning provided LA’s first runs, and his double in the ninth drove home Betts, whose first hit of the series was a single.

Muncy’s two-run homer pulled the Dodgers within two and forced Atlanta to use closer Mark Melancon. Bellinger’s triple scored Will Smith before AJ Pollock hit a game-ending groundout to third.

“For us to be able to get Melancon in the game, in a game like this when we were down 7-0, I thought was big,” Roberts said. “To see some other arms that we hadn’t seen yet in the series I thought was important.”

The NL’s best bullpen faltered for the second straight night, this time early instead of late after the Dodgers gave up four runs in the ninth inning of a 5-1 loss in the opener. LA tied an LCS record by allowing four walks in an inning, two by Gonsolin and two from lefty reliever Pedro Báez in Atlanta’s four-run fifth.

There was still no sign of Jansen, the cutter-throwing right-hander who was bypassed with the score tied in the ninth inning of the opener. The club’s career leader in saves has been struggling with velocity and command, and he hasn’t pitched since he couldn’t finish LA’s Game 2 win in the Division Series against San Diego.

Alex Wood gave up a run on two hits while walking two and hitting a batter in the left-hander’s first postseason appearance since 2018, when he came out of the bullpen nine times. Lefty Adam Kolarek surrendered Ozzie Albies’ second ninth-inning homer of the series.

“I think we did a good job of getting other guys in there to get their feet wet as far as in this series, to not stress them, for them to be available in the coming days,” Roberts said of what will be the first NLCS without days off in 42 years. “You just can’t play every game regardless of score like it’s life or death in a seven-game series.”

Despite the late rally, it’s getting close to that for the Dodgers. 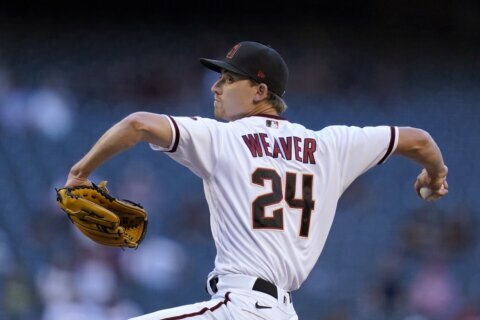 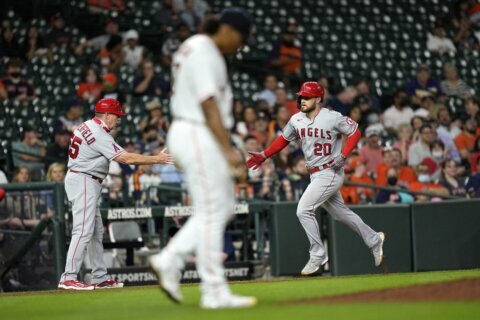 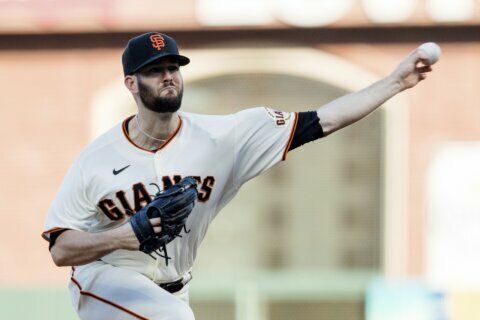 Giants come through in the pinch, beat Rangers 3-1