Back from virus, Freeman makes NLCS in 11th year for Braves

The slugging first baseman recovered from a serious bout with COVID-19 in July in time to play a full season for the Braves and help them to their first NL Championship Series since 2001.

As the Braves prepare to meet the Los Angeles Dodgers starting on Monday in Arlington, Texas, Freeman was asked to reflect on everything that’s happened since the night the coronavirus caused his temperature to spike to 104.5.

“I try not to think about,” he said. “I try to live in the moment … but I was just happy to try and make opening day and now here we are eight wins away from a World Series.”

Freeman and the Braves swept the Miami Marlins to end a streak of eight straight series losses in the NLDS. He admitted before the series that their losing streak in the division series was a chip on his shoulder and was thrilled to finally end it, in part so he didn’t have to hear about it anymore.

“I’m just glad the narrative is changing,” he said. “There’s not really much to talk about now. We’ll start our own narrative. So that’s the great thing about this.”

The Braves thought their team was good enough to win the NLDS last season, but they lost to the Cardinals 3-2 in a series where Freeman was slowed by a nagging elbow injury.

“We definitely feel like we deserve to be in this situation,” he said. “But we all know baseball is a funny game sometimes, and they made us wait one more year and that’s OK with us.”

The four-time All-Star was healthy this season after recovering from COVID-19 and is an MVP candidate after hitting .341 with 13 homers, 53 RBIs and a NL-leading 23 doubles in the regular season.

Freeman hasn’t found his stroke in the playoffs so far this year, hitting .167 (3 for 18) with only one RBI as the Braves went 5-0 against Cincinnati and Miami.

Freeman has spent his entire 11-year career in Atlanta, making him the team’s longest tenured player. It means a lot to him that he’s helped put the Braves back in the championship series for the first time since the days when his idol Hall of Famer Chipper Jones starred for the team and Bobby Cox was its manager.

Manager Brian Snitker is in his fourth full season in charge in Atlanta after several stints as an assistant with the Braves. He spoke of the importance Freeman and outfielder Nick Markakis had to his team in its return to the ranks of baseball’s elite.

“I’m happy for him, for Nick, some of these guys that have been here since I came aboard and what they went through and how they hung in there and never changed who they were and how they approached the game,” Snitker said. “And I’m happy for Freddie to get this opportunity to get on this stage.”

There’s a mutual admiration between the two, and Freeman has been impressed with what the manager has done in leading the Braves to three straight NL East titles. Freeman said he shared a hug with Snitker after Thursday’s win in Game 3 as the two soaked in the moment.

“He’s a baseball man. He’s a Braves man,” Freeman said. “He’s been in this organization for so long and deserves all the success that’s coming. Hopefully we can cap off his wonderful baseball life with a World Series.”

Freeman played with Jones in his final three seasons and the pair remain close. He’s such a huge fan of the former third baseman that he has a little reminder of him at every game.

“As you can see, I wear his shirt every game,” he said pulling on a tattered blue shirt with a white No. 10 for Jones’ jersey number. “It’s on its last leg.”

The sleeves are long gone, and it has several visible holes. But it’s a small miracle that it hasn’t fallen completely to pieces since Freeman has been wearing it in every game since everyone on the team got one in Jones’ last season in 2012.

Now Freeman and the shirt are headed to the NLCS, hoping to keep rolling to the World Series, something that Jones and that 2001 team weren’t able to do.

“I’m sure he’s really excited for us,” Freeman said. “Hopefully we can bring something home for him soon.” 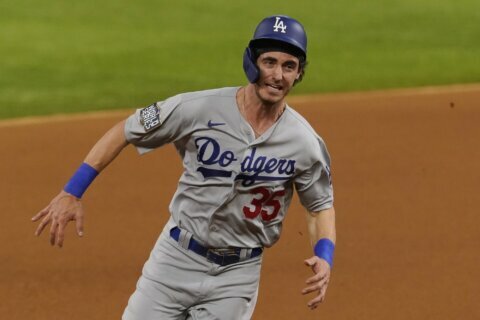 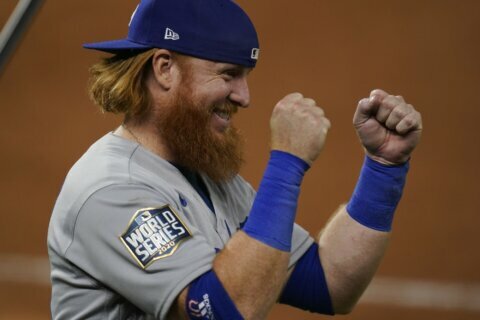