Sanchez back in Yanks lineup, Cashman talks to wobbling team

Cashman tried to reinvigorate a roster that has lost four straight games and 14 of 19, a slump that has dropped New York back in the playoff race.

Manager Aaron Boone said Cashman delivered a positive message, one the GM said was meant to remind players “where they’ve got to get back to and who they are” in the final weeks of this abbreviated season.

Regarded as heavy favorites to win the East when the pandemic-shortened 60-game season began in late July, the injury-plagued Yankees began the day at 21-20, tied with Houston for the last two AL playoff spots in the expanded postseason field.

Cashman made a rare trip on the road with the Yankees, seeing them play Toronto at the Blue Jays’ temporary home in Buffalo. The Blue Jays beat New York 12-7 on Monday night.

“I’ve taken the opportunity to do that from time to time,” Cashman said of speaking to the players. “See if it helps. Bottom line is, we’re on our own. There’s no help coming from anywhere. The challenge is to find a way to get through this storm, batten down the hatches and come out on the other end with clear skies and sunny days ahead.”

New York began play two games behind second-place Toronto and 6 1/2 back of Tampa Bay for the division lead after a 16-6 start.

Stars Aaron Judge, DJ LeMahieu and Giancarlo Stanton are among the many Yankees stars who have been on the injured list.

It wasn’t so close Monday, when Toronto scored 10 in the sixth to overturn a 6-2 deficit and win the first meeting of the season between the teams. New York and Toronto play nine more times in the final 19 games.

“We have 19 to go, so it’s time to go,” Cashman said. “Not that it wasn’t time to go before, but clearly we have to get back on track yesterday. But I believe in these guys. They’re here for a reason and they’ve done it before, many times, for us.”

“We have big goals, and those goals are still in play. Despite how bad we’ve played, our goal is still the same,” he said.

Sánchez was benched for the past two games because of offensive struggles. Sanchez is mired in a 3-for-28 funk that has dropped his batting average to .130.

“We had not seen somebody with his capabilities struggle as badly as he had struggled,” Cashman said.

Sanchez will start behind the plate and bat seventh. He does not have a multihit game this season and has seven homers and 15 RBIs in 32 games. Last year, Sanchez had 34 home runs and 77 RBIs in 106 games.

“It’s not like he’s turning 38 and you think the gas tank is running low,” Cashman said of Sanchez, who is 27. “It’s all there. We’ve got to find a way to tap back into that, calm him down, and allow him to be the best version of himself.” 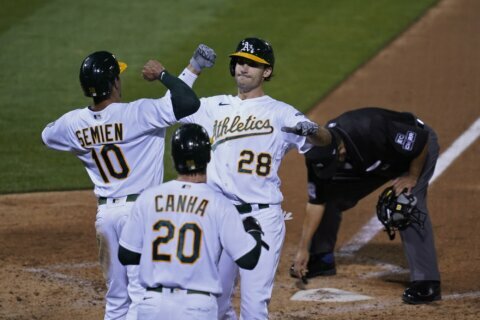