MIAMI (AP) — Starling Marte hit a tying, three-run double off Brandon Workman in the eighth inning, Jorge Alfaro singled home the winning run in the ninth and the Miami Marlins beat the Philadelphia Phillies 7-6 Thursday night in the opener of a seven-game series, the longest in a major league regular season in 53 years.

The series includes three makeup games and two doubleheaders, replacing a series postponed from July 31 to Aug. 2 due to a novel coronavirus outbreak among the Marlins.

The previous seven-game, regular-season series was between the New York Mets and Chicago Cubs at Wrigley Field from Aug. 31 to Sept. 3, 1967, according to the Elias Sports Bureau. The Phillies have not played a seven-game, regular-season series since Aug. 16-20, 1930, at the Cubs, a set that included two ties that ended because of darkness in the era before night games.

Miami began a season-high, 15-game homestand and improved the worst home record in the major leagues to 3-9. The Marlins were coming off 29-9 loss to Atlanta.

“It’s happened too many times and we’ve been through a lot,” Marlins manager Don Mattingly said. “Every time it looks like these guys will fade, they show up and put up a W and keep it going.”

Brian Anderson singled off Workman (1-2) leading off the ninth, and pinch-runner Monte Harrison advanced on Garret Cooper’s groundout and stole third on catcher J.T. Realmuto with a headfirst slide, a call by third base umpire David Arrieta play upheld in a video review.

Miguel Rojas was intentionally walked to set up a potential double play, Workman advanced Rojas with a wild pitch and Jazz Chisholm struck out. Alfaro grounded a single up the middle just past the glove of diving shortstop Didi Gregorius for his first big league walk-off hit, giving the Marlins their first walkoff win this season.

Alfaro, who was the first of the Marlins’ 18 players to test positive for COVID-19 and was placed on the IL before opening day, has hit .220 with 19 strikeouts in 50 at-bats since returning to action. But he is hitting .292 (7 for 24) over his past seven games.

Tommy Hunter allowed three runs in two-thirds of an inning, and Workman one run in one inning. Philadelphia’s bullpen has allowed 101 earned runs in 127 1/3 innings, a 7.14 ERA that is the worst in the major leagues.

“I think we’ve just got to do a better job of attacking guys,” Realmuto said. “I think the stuff is there. We’re just getting in bad counts, walking leadoff guys with a three-run lead. You can’t do stuff like that and be successful late in the game.”

Realmuto hit his 11th homer and had an RBI grounder as Philadelphia built a 6-3 lead in the fifth.

Alfaro had his third straight game with multiple RBIs for the Marlins.

“It’s frustrating for all of us, but the one thing this team’s always done is it’s bounced back,” Phillies manager Joe Girardi said. “We went through this a couple of times this year, and they’ve got to do it again. It’s what they have to do. We don’t have a choice.”

Phillies LHP José Álvarez (groin) is starting to take part in light activity, but Girardi doesn’t expect him to pitch again in the regular season. Álvarez took a 105.3 mph line drive off the bat of Toronto’s Lourdes Gurriel Jr. on Aug. 20.

Marlins: INF Jon Berti (index finger) was placed on the 10-day IL. Berti, batting .250 with 10 RBIs and eight steaks, was hurt while attempting a bunt in the 10th inning of Monday’s game against the Braves. … C Francisco Cervelli (concussion) was transferred to the 60-day IL, ending his season.

Phillies: RHP Aaron Nola (4-3, 2.74 ERA) is scheduled to pitch the first game of the doubleheader. Nola allowed six runs — three earned — and struck out 10 in 5 1/3 innings against the Mets last Sunday. No starter was announced for the second game.

Marlins: LHP Trevor Rogers (1-0, 3.00) is scheduled to start the second game. He allowed three runs and struck out 10 in six innings last Sunday against the Rays. No starter was announced for the opener. 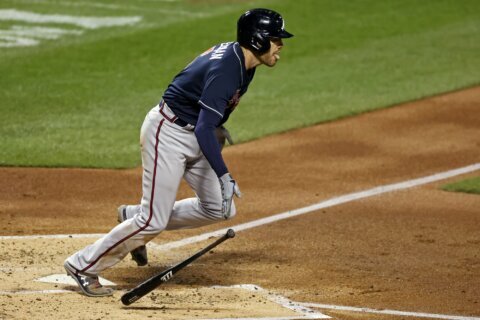 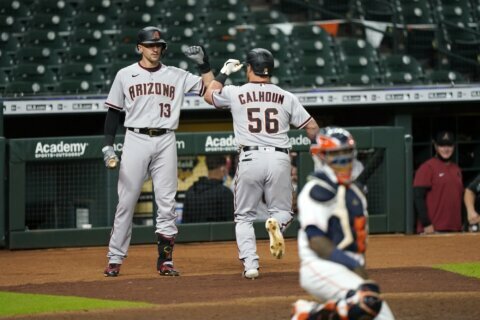