ST. PETERSBURG, Fla. (AP) — The Tampa Bay Rays became the first major league team since at least 1901 to start a batting order with all left-handed batters.

“I hope they all get hot, right now it would be nice,” Cash said.

Boston manager Ron Roenicke countered by bringing in left-hander Matt Hall after Triggs allowed one hit and a walk in a scoreless first inning. However, Riggs said after the game that Triggs was lifted because of a pinched nerve in his neck. Yoshi Tsutsugo greeted Hall with a home run..

While some teams have started a lineup in which all batters hit from the left side the first time up, all previous occasions since 1901 included at least one switch-hitter.

Triggs was making just his second start for the Red Sox, who claimed him off waivers from San Francisco on Aug. 19. The 31-year-old allowed one run, three hits and two walks in a no-decision against Toronto last Sunday.

“We knew we were left-handed heavy coming into the season. We’ve added a couple of left-handed hitters,” Cash said. “Thinking about it last night after the game, we don’t know their pitcher very well, Triggs. We’re not even sure how deep he’ll go in the game, but we know we have plenty of right-handers that if they decide to go left-handed at certain points, we have options.”

Roenicke said when bench coach Jerry Narron gave him the Rays’ lineup, he thought it was wrong. 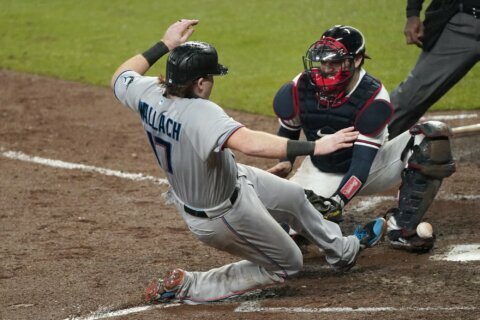