OAKLAND, Calif. (AP) — The San Diego Padres were far too powerful and beat the Athletics at their own home run game with Oakland searching to rediscover its rhythm after an unplanned layoff.

Fernando Tatís Jr. and Manny Machado hit back-to-back homers in the seventh inning, and the Padres pounded Oakland 7-0 on Friday night as the A’s returned to the field from a four-game postponement following a positive coronavirus test.

Tatís matched Mike Trout for the majors’ home run lead at 14 and finished with three RBIs.

“Without looking at the entire league I can’t imagine anyone else being as productive,” manager Jayce Tingler said. “But I will say there’s other guys on our team that are tremendously productive. … Tatís, the thing I’m most excited about for him is the continued growth.”

Padres catching prospect Luis Campusano homered in the eighth for his first major league hit after the 21-year-old was called up before the game.

Tatís returned to the leadoff spot and hit a two-run double moments after Trent Grisham’s double put the Padres on the board in the decisive fifth. Eric Hosmer added an RBI single that inning, chasing A’s starter Jesús Luzardo (2-2).

“It’s been a few days since the live at-bats and Davies is a guy, he nibbles around the zone,” Oakland’s Matt Olson said. “He’s not a guy out there throwing upper 90s. He’s out there doing what he has to do to get outs. He’s a big location guy. He just stayed off the barrel a little bit today.”

The Padres won a challenge in the bottom of the fourth when Olson initially was ruled safe at the plate on Robbie Grossman’s double — beating a tag by Austin Nola — that would have put Oakland ahead 1-0. Both sides considered that a key momentum swing.

“I think that was kind of the moment of the game,” Davies said.

Lefty Mike Minor made his A’s debut in the seventh and gave up the two homers after being acquired in a trade Monday from the Rangers.

Oakland lost its third straight game dating to last Saturday’s doubleheader defeat at Houston. The A’s then had their next four postponed following right-hander Daniel Mengden’s positive test for COVID-19 at Houston — the final game with the Astros last Sunday and a three-game series in Seattle. Mengden is asymptomatic and remained at home in Houston under quarantine.

The A’s will face three doubleheaders in a seven-day span starting next Tuesday against the Astros.

Manager Bob Melvin expected his offense might be more sluggish than slugging after the long layoff.

“You’re probably going to be a little rusty based on not seeing live pitching,” Melvin said. “Once you get into the game you don’t feel that way, you just react and you just play. It probably takes a little while to come back.”

A’s closer Liam Hendriks said had there been a coronavirus outbreak among the bullpen members he might have considered not pitching the rest of the season given he is high risk with an autoimmune liver disorder.

“Stressful, to put it very lightly,” he said. “It’s been stressful, it’s been daunting, it’s been a rollercoaster of emotions. I’m just happy that we have gotten through that little stage as a team, that we were following protocol. Not only did Mengden follow protocol but also the fact that we as a team showed that we have been doing the right things on the field. That was a big one for me. If there was a rash of positive cases it would have definitely made me consider moving forward the season.”

“I’m really excited about the fact that we just had a week off and we get to face the Padres, Slam Diego or whatever people are calling them now,” Hendriks quipped. “… I still don’t know how I feel about their uniforms though, still unsure. They kind of look like silken pajamas.”

Athletics: SS Marcus Semien, scratched from last Saturday’s second game in a doubleheader at Houston, took swings off a tee in the cage as he nurses a sore left side. He is optimistic of returning soon. “It looks like we’re gaining some ground,” Melvin said. … LHP A.J. Puk threw 1 1/3 innings in a rehab outing at the club’s San Jose alternate site and is slated to pitch again Sunday with the hope of activating him next week. Puk hasn’t pitched at all this season because of a strained pitching shoulder that required injections. General manager David Forst said the team plans to use Puk as a multi-inning reliever when he returns. 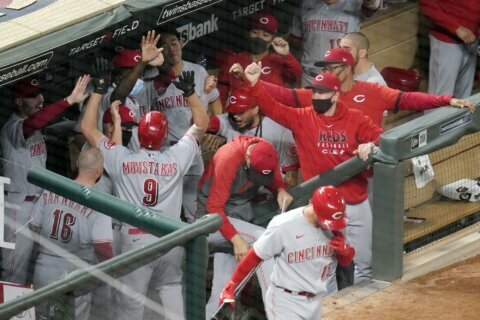 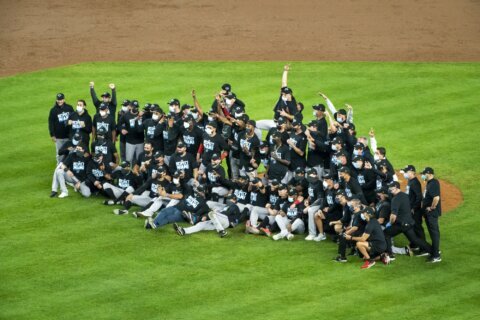