LOS ANGELES (AP) — Terrance Gore is on the Los Angeles Dodgers’ roster for the NL wild-card series against the Milwaukee Brewers.

The speedy outfielder played in two of the Dodgers’ first six games this season and was designated for assignment on July 30. He was assigned outright to the team’s alternate training site after clearing waivers.

This will be Gore’s fourth postseason appearance following time with the Kansas City Royals in the 2014 and 2015 World Series and with the Chicago Cubs in the 2018 NL wild card game. The majority of his games have been as a pinch runner.

The Dodgers will carry 13 pitchers and 15 position players.

Anderson left his last start early with a blister on his left index finger. His absence makes Milwaukee’s starter in a potential Game 3 uncertain.

Williams emerged as one of baseball’s top relievers this season and is a candidate for Rookie of the Year.

Williams, who last pitched last Friday, went 4-1 with a 0.33 ERA and 53 strikeouts in 27 innings. He gave up eight hits and one earned run all season while forming a dynamic duo with closer Josh Hander at the back end of Milwaukee’s bullpen.

Making the roster of 12 pitchers and 16 position players are designated hitter Daniel Vogelbach and outfielder Ben Gamel. Their status had been uncertain due to quadriceps injuries. 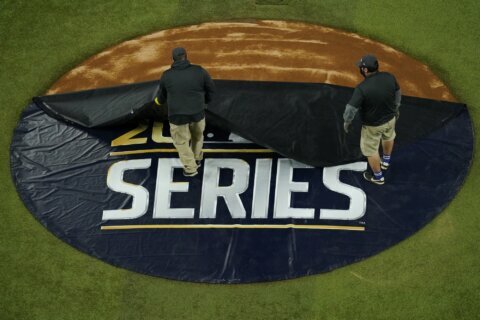